Accused in fake encounter cases, jailed cop gets night out

Suspended policeman Rajkumar Pandian, who is accused in the Sohrabuddin Sheikh and Tulsiram Prajapati fake encounter cases, was caught on camera visiting his home for a night when he was supposed to be in judicial custody.

According to a report by IBN, Pandian was brought to Ahmedabad by the Maharashtra police on Sunday night and taken to the Circuit House, where he was to be held for the night. 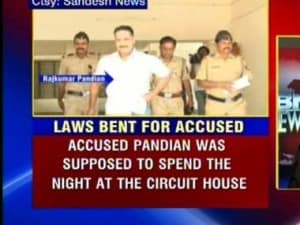 The car which Pandian got into allegedly tried to run over the lens-man who was there to film the accused. IBN

But instead, in footage recorded by a local television channel, Pandian is seen driving off in a private car to his residence in Prahladnagar area of Ahmedabad without any escort. The former officer then went into his house, where he spent the night.

According to a Hindu report, Pandian left home on Monday morning when he was intercepted by the television crew.

The car in which Pandian got into allegedly tried to run over the journalist who was filming the event. Pandian fled from the spot and was later found at the local court with police escort.

The Mumbai and Gujarat police have traded charges and are accusing each other of being responsible for escorting Pandian.

"We still have to figure out whether it was the responsibility of Mumbai police or Gujarat Police. But we have ordered an inquiry into the matter and additional DGP (Law and Order) Shivanand Jha has been asked to probe," said Director General of Police Amitabh Pathak.