The joint session of the three BJP-run Municipal Corporations of Delhi (MCDs) on Thursday was stopped abruptly after a clash broke out between the BJP and AAP councillors. 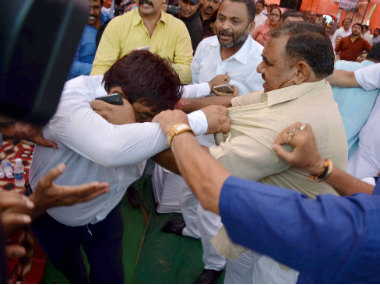 A BJP councillor beating up an AAP councillor Rakesh at MCD joint Session at Ramlila Maidan in New Delhi on Thursday. PTI

The fight ensued after a few BJP councillors allegedly beat up an Aam Aadmi Party (AAP) councillor when the latter refused to remove his party's cap during the session.

According to this report, the event was a first-of-its-kind, as the MCDs were holding the session to discuss their issues with the AAP-led government at Ramlila Maidan.

AAP councillor Rakesh Kumar – who belongs to a Dalit community – had come to attend the joint session of MCD sporting a party cap. Some BJP councillors raised objections and asked him to remove the cap.

Watch: Clash between AAP and BJP councillors at MCD joint session in Delhi.https://t.co/q9ZFIUu2tj

Reports say that initially Kumar removed his cap but later wore it again which triggered a verbal duel between some BJP councillors and him. Later the BJP councillors allegedly slapped Kumar several times before others intervened in the matter.

Kumar then filed a complaint with North MCD Mayor Sanjeev Nayyar who assured him of taking appropriate action.

Shortly after the incident, AAP leader Ashutosh demanded a police inquiry under the SC/ST Act.

Following the incident, Delhi Chief Minister Arvind Kejriwal expressed his anger on Twitter. "Utterly shameful. BJP is a party of gundas. Rakesh is Dalit. BJP assaulting Dalits all over India in a systematic way," he said.

On Wednesday,  a number of councillors from BJP-ruled MCDs led by three mayors staged a protest outside Kejriwal's residence, demanding clearance of their pending dues by the AAP government.