A week after the Amarnath Yatra terror attack, pilgrims continue their perilous trek

At 8.20 pm on 10 July 2017, a bus carrying pilgrims undertaking the Amarnath Yatra was attacked by terrorists in Batengoo — leaving eight dead and 13 others, including some policemen, injured.

The Batengoo incident occurred seven years after a terror attack that left 30 people dead, in the base camp of Pahalgam.

On site, and on social media, there was an outpouring of support for the families of the deceased, and the injured.

Just a day later, pilgrims resumed their journey, with several thousands pouring into the Valley to trek to the holy Amarnath cave. 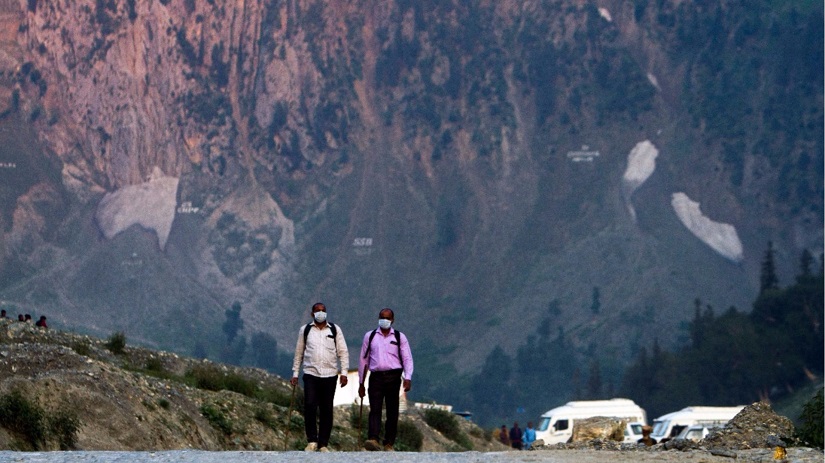 Pilgrims continued with the Amarnath Yatra despite the terror attack of 10 July that left eight people dead and 13 injured. Photo: Javeed Shah

At the Baltal camp, for instance, there was the usual hubbub of yatris entering and leaving. Perhaps in fewer numbers, but yatris continued their trek, threat to life notwithstanding. This was exactly a week after the terror attack.

Among them were Binder Singh and Sudesh Sharma, who had travelled to the Valley on their motorcycle, all the way from Haryana. "One can die anywhere, but it is better if one dies in the home of bhagwan," Binder said, while Sudesh added the duo "wasn't scared of anything". Binder Singh and Sudesh Sharma travelled to the Valley from Haryana, on their motorbike. Photo: Javeed Shah

They were joined by other yatris, also on bikes.

Security arrangements at Baltal and elsewhere along the Amarnath Yatra route had been beefed up in the wake of the 10 July attack. Making his way though security checks, Pandirang Patel from Uttar Pradesh shrugged when asked if he wasn't afraid after the attack. "Life and death is in the hands of god," he said. Another pilgrim we met, from Punjab, said the heavy security made him feel safe from any other militant attacks.

A similar sentiment was echoed by Promod Kumar from Ghaziabad, who was travelling with his family and friends. The group said they had left their safety in the hands of god — and had faith in the security arrangements.

"People die everywhere. Death is inevitable," said Vijay Kumar, who was returning to his home in Amritsar having finished the Yatra. He has been undertaking the Amarnath Yatra for the past 17 years and said no one could harm him.

Security check slips were pasted on the sides of Yatra buses at Baltal, and pilgrims were ferried into them under heavy guard. The pilgrims queued up patiently for bus tickets, under the watchful eyes of the security personnel.

Meanwhile, Mohd Shahid Khatana, a pony-wallah from Rajori said this was one of the worst seasons of the Amarnath Yatra, in terms of business. Khatana rents his pony to yatris. Taxi driver Javaid Rishi also said that there had been little work this year, because of the terror threat.

Pilgrim Manoj Kumar Yadaw, at least, didn't seem to be too apprehensive about the threat. He had completed his yatra safely and was going back home. "The Muslims in the Valley are good people," he said. "Everyone here is so good."