A plague on all our houses: Solving India's building collapse problem

If in the past buildings collapsed occasionally in India, it now seems to be a routine event. On 28 June, more than twenty people died in two fresh incidents, one in Chennai and the other in Delhi. While the building that collapsed in Delhi was 50 years old, the one in Chennai was under construction.

The toll in Chennai has risen to 26 dead and the toll is likely to go up because many more are believed to be trapped inside and rescue operations will take at least two more days.

Earlier in March, seven people died when a seven-storey building collapsed in Santa Cruz in Mumbai. A year earlier, 72 people were killed when an eight-story apartment building collapsed there. More over, there are other incidents such as a fire accident that killed 90 people in the AMRI hospital in Kolkata in 2011.

It’s certainly a new category of risk to life if one lives in India. Rough calculations show that about 100 people have died in building collapses last year. If one adds the list of fire accidents, the toll is much higher. Safety in multi-storey buildings in India is something that people should be worried about now. 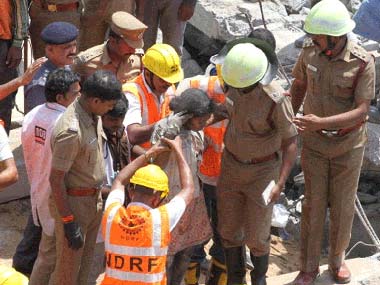 The incidents in Delhi and Chennai show the two extremes of the problem - one in a dilapidated old structure which came down because authorities fail to note its risk to people, while in Chennai the building was brand new, or rather under construction. Apparently, it broke into two and collapsed like a pack of cards. The chief minister J Jayalalithaa, who visited the site has reportedly said that the cause was poor quality of construction. Engineers say that the foundation of the building might have been weak or the overall quality of materials low. In the same area, there are many more buildings that are coming up in reclaimed marshlands. Another 11-storey building next to the one that came down looks fairly unsafe as well.

How does one address the issue?

Should city development and town planning authorities crack down and issuing more and more notices to the building? In such a case, it will be an endless tale because construction is hugely unregulated.

For instance, in April in Navi Mumbai, 450 buildings were served notices for lack of adequate fire safety. Reportedly, 1,397 buildings in the western and eastern suburbs in Mumbai were surveyed and notices were issued to 1,216 for violations.In Surat, more than 40 buildings in the diamond belt were given notices.

Does it end or at least mitigate the problem? Hardly, because it’s an ocean out there and the system reeks of corruption and inefficiency.

The only way to handle the problem is self regulation under public scrutiny.

The National Building Code 2005 calls for the “inclusion of a complete philosophy and direction for successfully accomplishing the building projects through Integrated multidisciplinary approach right through conceptual stage to planning, designing, construction, operation and maintenance stages.” But in India, buildings collapse at various stages - some while they are constructed, others years after they are completed.

The Building Code is comprehensive. It calls for reforms in the technical and social aspects of construction of buildings. Safety of buildings before, during and after construction (if the two stage permit process that it recommended had been implemented, perhaps the phenomenon of under construction buildings collapsing could have been avoided); empowerment of engineers and architects, updating requirements of low income housing in rural and urban areas and revamping of fire safety norms and promotion of innovative materials and technologies are among the recommendations of the NBC.

But most of this sounds good on paper and doesn’t work because people are desperate and are willing to settle for any quality. People are ready for any kind of habitat even that which comes at huge risk as the incidents on the weekend showed.

It’s very complex because housing is one of the fundamental requirements of human life that’s hugely overpriced and in chronic short supply.

Where does one start?