With railways to run special trains for migrants without consent from destination states, concerns arise over containment efforts

The Indian Railways on Tuesday announced that it will be running 200 special passenger trains daily from 1 June. This is in addition to the Shramik Special and the air-conditioned special trains which are currently being operated on the Rajdhani routes connecting 15 major cities to Delhi.

On 29 April, the Centre had allowed migrant labourers to return to their home states and issued strict guidelines in terms of social distancing and quarantine rules. The Indian Railways operated the first train ferrying migrants back to their native states on 1 May.

Since then, multiple COVID-19 positive cases have emerged in the states like Bihar, Odisha, Assam, who have recorded a spike in patients with migrants testing positive on reaching their native states.

Bihar, on Tuesday, reported 1,423 confirmed COVID-19 cases, of which 652 are migrant labourers who have returned home from outside the state. Out of the 652 who tested positive, 218 have come from Delhi, followed by 141 from Maharashtra, 139 from Gujarat, 36 from Haryana, and 33 from West Bengal.

Odisha recorded 102 new COVID-19 on Tuesday, raising the total cases to 978 in the state, a health department official told PTI.  Of the new patients, 97 were in various quarantine centres across districts of Odisha as they had recently returned from Gujarat, West Bengal, Tamil Nadu, Telengana, Andhra Pradesh and Maharastra, the official said. 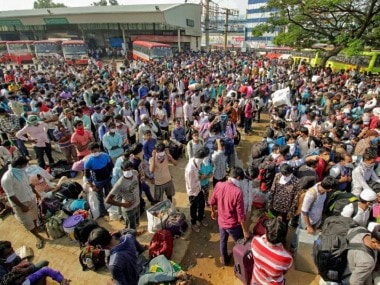 Assam on Tuesday witnessed the highest single-day spike in COVID-19 cases with 39 people, including a two-month-old baby, testing positive for the disease on Tuesday. Of these 39 new cases, 20 people had recently returned to the state and were in quarantine centres across districts, reports PTI.

Earlier, host states had faced the challenges of providing food and shelter for migrant labourers, and of convincing them of the necessity of staying where they were. Now, there is a new fear: of the coronavirus spreading in rural areas that have remained relatively untouched, which may lead to overwhelming the health infrastructure in the home states with the large influx of migrants.

Although, most states are taking several steps to prevent the spread of coronavirus. According to a report in The Times of India, Madhya Pradesh and Chhattisgarh are ensuring that migrants are screened while entering the state, their body temperature is checked, and they go into home quarantine for 14 days.

In Gujarat, people wishing to return home need to procure a medical certificate issued one or two days before the scheduled departure. These migrants also have to undergo a mandatory temperature check at the railway station or bus depot, and those with symptoms will not be allowed to travel.

Now with the railways running an additional 200 special trains, without the consent of the destination states to run the trains, there is a risk of the situation taking a turn for the worse in these home states with thousands returning home. But the real question remains if the spike in infections can overwhelm healthcare infrastructures in the state.

One in four Delhi returnees tests positive in Bihar

Bihar has reported a spike in infection rate from 1.8 percent to 2.34 percent ever since the influx of migrants returning to the state, according to India Today report. This spike notes that the "infection rate" among migrants was more than double the state's average, leading to a spike in cases in the state.

According to an IndiaSpend report, in Bihar's government hospitals, there is one bed for 8,645 people.

Meanwhile, the northeastern state of Assam has clearly said that they would need extra funding if migrants return to the state. While addressing a press conference on Monday, state health minister Himanta Biswa Sarma said, “The state government is preparing a detailed plan of how much money we can afford to spend on each person in quarantine while ensuring they get good care. Our estimate says we will have to spend Rs 300 cr if one lakh people are placed in quarantine.”

The Assam government had provided financial assistance of Rs 2,000 each to nearly 4 lakh workers from the state staying outside. As per that figure, it is estimated that nearly one lakh of them could return in the next few weeks, reports The Hindustan Times.

One ventilator for every 70,000 people in Jharkhand, says report

As of 17 May, Jharkhand has registered 223 confirmed cases in the state. According to health officials, 88 of the total 223 cases were migrants.

A report by News18 highlights the complete lack of healthcare infrastructure in the state. According to the article, Rajendra Institute of Medical Sciences (RIMS), the only state-run super-speciality medical institute in Jharkhand, does not have the required equipment to deal with the pandemic.

The integrated COVID-19 centre at RIMS has 30 ICU beds of which 12 are without a ventilator. Most district hospitals also do not have even one ventilator. At present, there is one ventilator for every 70,000 people in the state, the report noted.

Odisha was one of the first states to have reported a surge in the number of migrant labourers turning positive on arrival with Ganjam district being the hotspot since 5 May.

As of 10 May,  57,000-odd migrants have returned to Odisha from other states of which Ganjam alone accounted for over 32,000 returnees.

Hindustan Times reports that district administration in the state is worried about people jumping quarantine. Odisha Assembly Speaker Surjya Narayan Patro had alleged that migrants are slipping out of quarantine centres at night to be with their family members even as the officials said those violating quarantine norms would be arrested.

A Firstpost article predicts Odisha government will have to bear a burden of additional expenditure of Rs 3,000 crore to bring back migrants, their safe quarantine, food, bed and medical expenses.

While arrangements have been made to accommodate migrant labourers returning from other states, the challenges are plenty, including arranging the logistics for their safe travel to their villages in Odisha, and then settling them in quarantine centres with proper facilities, the report noted.

However, the plight of migrants stranded away from their native places is no less worrisome, but the real challenge now arises with them returning in thousands to their native states. Conditions such as the ones described above indicate why states like Bihar, Assam, will face several issues in containing the outbreak, with so many workers testing positive, this will strain the states' already burdened health care infrastructure.