Purple Cap holders in the history of IPL: List of bowlers finishing as highest wicket takers in a season

From Sohail Tanvir in the inaugural edition to Bhuvneshwar Kumar in the 2017 tournament, here’s the list of bowlers who have won the coveted ‘purple cap' in the IPL

For a game that is believed to have been first played sometime in the 16th century, cricket, as we know it now, has gone through major upheavals, been subject to a variety of technological advancements and has faced some major challenges both on and off the field.

One such hurdle was the advent of Twenty20 (T20) cricket, an idea to rope in more crowds to the grounds. For an idea that was more or less treated as a carefree, entertaining grandson of the grand old man — Test cricket — T20s have come a long way since their beginning in the English county season of 2003.

After the first T20 World Cup was held in 2007, the sport received its biggest shot in the arm, when in 2008, the Board of Control for Cricket in India (BCCI) started the Indian Premier League (IPL).

The widespread criticism faced by this ‘fast-food’ brand of cricket, including IPL, is that the equation in this ‘bat and ball’ game is more skewed towards the bat.

However, in the past 10 years, IPL has seen some intensely-fought battles between the bat and ball, with the bowler picking up most wickets in a season being awarded the ‘Purple Cap’. 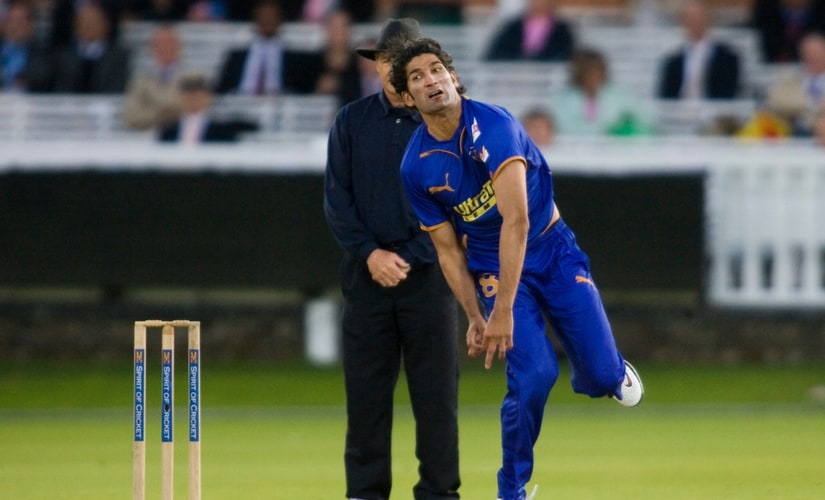 In the only IPL season that saw Pakistan cricketers taking part, Sohail Tanvir was the most potent weapon in the armoury of the Shane Warne-led Rajasthan Royals, who lifted the trophy in the inaugural edition.

In the group stages, in Royals' first-ever encounter against eventual finalists Chennai Super Kings (CSK), it was Tanvir who ran through the highly-favoured Chennai batting line-up to end up with figures of 6/14, which is still the best-ever bowling figures in the IPL.

Tanvir, with a tally of 22 wickets, steamed in with his awkward-looking run up to deliver time and again for the Royals.

With a strike rate of 12.09, his incisive deliveries flummoxed the batsmen with impressive consistency and his economy rate was a decent 6.46, considering the balance in T20 games invariably do tilt towards the batsmen.

For the second year running, the bowler who won the purple cap was from the title-winning team. Rudra Pratap Singh, part of the infamous 2008 DC side that managed to win just 2 of its 14 games, orchestrated a turnaround in the 2009 edition as he inspired the team’s bowling in the very first match and returned with figures of 4/22 against the mighty Kolkata Knight Riders (KKR).

This set the tone for Chargers’ campaign that saw them enter the last four, edging Kings XI Punjab on better run rate, beating table-toppers Delhi Daredevils in the semi-final and Royal Challengers Bangalore (RCB) in the summit clash.

With a strike rate of 15.56 and an economy of 6.98, RP Singh might not have been the best bowler on a statistical level, but for a resurgent Chargers side, his knack of taking wickets at the right moments was his biggest contribution to their successful title run.

The Chargers side continued from where they left in the second edition and finished second on the points table at the end of league matches. The wily left-arm off spinner, Pragyan Ojha, who had a commendable 18 wickets in the 2009 edition, was in ominous form in the third season of IPL.

Ojha picked up 21 wickets and his 3/26 against Mumbai Indians in a losing cause, was his best bowling figure in this edition. In 2010, this was one of the very few losses for Chargers, a team that was more about its parts than individual superstars.

Ojha wasn’t afraid to flight the ball and invite batsmen to go for the big shots, which reflected in his economy (7.29) and strike rate (16.8). However, this was equally compensated by Chargers’ captain Adam Gilchrist’s belief in the left-armer to break partnerships and gain the upper hand in almost every match. Lasith Malinga was the backbone of the Mumbai Indians outfit. AFP

Sri Lankan seamer Lasith Malinga has probably been the most consistent bowler in IPL history and was the backbone of the Mumbai Indians’ squad that has won the most titles so far in IPL.

Though he was successful right from his first season with the Mumbai franchise, it was the 2011 edition that etched his name in golden letters.

In the first game of the fourth edition, Malinga stormed through the Delhi Daredevils side ending with figures of 5/13 to kick-start the Mumbai Indians campaign with a resounding eight-wicket win.

With 28 wickets at a strike rate of 13.39 and a tight 5.95 economy, Malinga was undoubtedly the most effective bowler in that edition.

Though they faltered in the semi-final, the Mumbai side qualified for the Champions League T20, where Malinga put up an all-round performance to emerge as the Player of the Tournament.

Delhi Daredevils once again topped the table, but slumped to a defeat in the semi-final.

However, their success in the group stages, where they lost just five out of 16 games, heavily relied on the pace duo of South Africa’s Morne Morkel and India’s Umesh Yadav.

The bowling performance of Morkel can be best described as clinical, as he consistently was Daredevils' best bowler in the group stages. His best figures of 4/20 came in Delhi’s final group stage match against Kings XI Punjab.

Though Morkel’s economy of 7.19 was on the expensive side and he had an unflattering strike rate of 15.12, these figures aren’t reflective of his impact on the Daredevils side.

With Delhi not winning the title, this became the third successive edition where the purple cap winner wasn’t part of the title-winning side. The curse of the purple cap continued this season too even as Chennai Super Kings’ bowling mainstay Dwayne Bravo became the first bowler in the IPL to pick more than 30 wickets in a single season.

The medium-pacer rained in slow deliveries match after match, mixing them up with skiddy ones to pick wickets at an impressive strike rate of 11.71, but with an economy of 7.95.

This was also the first time that both the Orange Cap (Michael Hussey scored the most runs in the tournament) and the purple cap holders came from the same team.

Table-toppers CSK were stopped in their tracks by Mumbai Indians who won their first-ever IPL title, despite Bravo returning his best figures of 4/42 in the final.

Chennai Super Kings have been among the league’s most consistent sides and they have had one new standout performer every season.

In 2014, it was the turn of Mohit Sharma to bask in the limelight of IPL as he followed up an impressive breakthrough season in 2013 (20 wickets) with 23 wickets in this edition.

Improving his strike rate from his debut season for CSK, Mohit picked up wickets at a strike rate of 14.04, but gave away quite a number of runs. His economy of 8.39 in 2014 is still the highest rate for a Purple Cap winner.

CSK’s run came to an agonising end in the second qualifier against Kings XI Punjab. However, Mohit’s consistency didn’t go unnoticed as he played for India between 2013-15, the years where his performance for CSK was rated highly.

The Purple Cap curse continued in 2014 too.

Bravo became the first player in IPL history to win the purple cap twice when he picked up 26 wickets in the eighth edition that saw Mumbai Indians equal KKR and CSK’s record of two titles each.

With a strike rate of 12.07 and an economy of 8.14, Bravo had an uncannily similar season to his outstanding 2013 where his bowling performances took CSK to the top of the table and subsequently to the final where the Mumbai side emerged victorious in a match where he was once again Chennai’s best bowler, this time with figures of 2/36.

However, his best figures of 3/22 came in the group stages against KKR in the winning cause.

Once again, the Purple Cap winner failed to win the title.

The edition was off to one of its most controversial starts with former champions Chennai Super Kings and Rajasthan Royals being handed two-year suspensions over charges of spot-fixing and betting.

There were two new teams, Rising Pune Supergiants and Gujarat Lions, that accommodated five players each from the suspended sides, while the other players were put back into auctions.

It was under such circumstances that Sunrisers Hyderabad picked up their first-ever IPL title, riding on the bowling exploits of Purple Cap-winner Bhuvneshwar Kumar, who finally broke the curse.

With 23 wickets at an economy of 7.42 and a strike rate of 17.42, Bhuvneshwar, in the company of Mustafizur Rahman, Ashish Nehra and Ben Cutting, shouldered the team that was widely considered to be the best bowling side in the league that often lost due to its shaky middle order.

Bhuvneshwar’s figures of 4/29 against Gujarat Lions was his best performance in this edition. The 2017 edition was just the second time both the Purple and Orange Caps (David Warner) went to players from the same team.

With his 26 wickets, Bhuvneshwar Kumar became the first player to retain the coveted cap and with the addition of Rashid Khan in the bowling line-up, the Hyderabad side once again was considered to be the best bowling outfit.

However, they had to bow out in the eliminator in a rain-curtailed match against KKR.

Bhuvneshwar was at his menacing best in the group stages picking up wickets at an economy of 7.09 and a strike rate of 12.07 to ensure the Hyderabad outfit sealed their playoff spot.

In the group-stage clash against Kings XI Punjab, he returned with bowling figures of 5/19, which is also his career-best in T20 matches.

And, the Purple Cap curse made its way back into the IPL ahead of its eleventh edition that will also see the return of Rajasthan Royals and Chennai Super Kings. 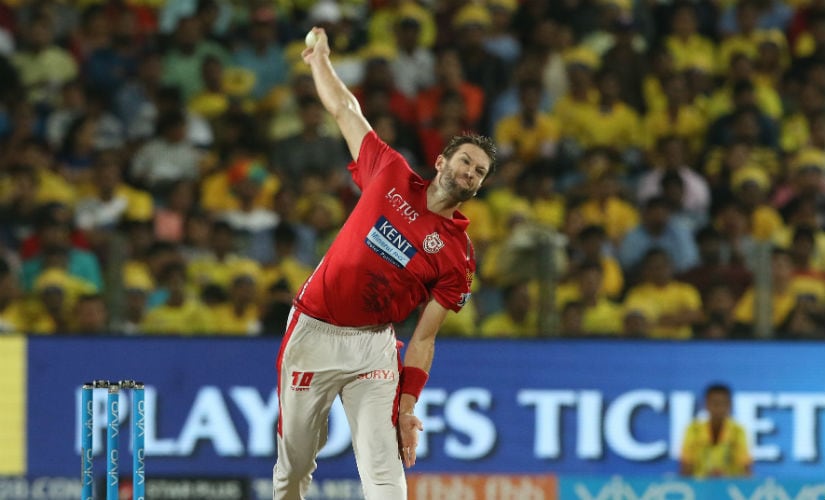 Andrew Tye finished the season as the Purple Cap winner in the 2018 edition, having collected 24 wickets at an average of 18.66. While the Australian seamer began the season a lukewarm note, it wasn't long before he started finding himself in the wickets column.

Tye collected three four-fers to his credit in the season, including a clinical display against Mumbai Indians (4/16) at the Wankhede Stadium, although the performance wasn't enough to save them from a narrow loss.

Tye was three wickets ahead of Sunrisers Hyderabad spinner Rashid Khan and pacer Siddharth Kaul, both of whom could've given Tye a scare had they not gone wicketless in the final against Chennai Super Kings.

Both Rashid and Kaul finished at 21 wickets apiece, though the former was ranked higher due to a superior average (21.80) and economy (6.73).