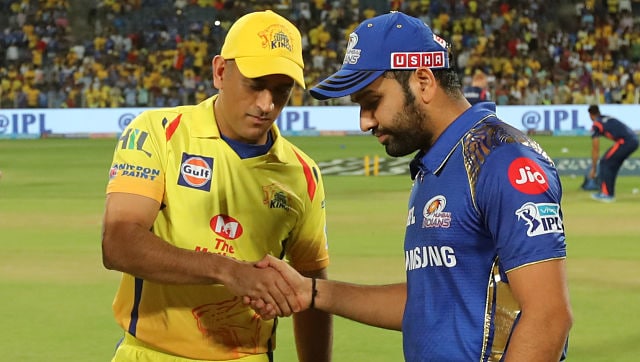 Wow, what a game. A nail-biter which lived up to the reputation of a MI vs CSK match. These are two top teams of this tournament for a reason. Every time they play, cricket at its thrilling best. Hard luck for CSK, they can regroup quickly and come back strongly. Not all is lost for them as they are still top of table but this loss will still hurt.

A word for Pollard who was superb on the night, deserved the Player of the Match award for his runs and wickets. A night to remember for MI, they bag the two points.

Tomorrow we return with a double-header. In afternoon, Rajasthan Royals will face Sunrisers Hyderabad and in evening Punjab Kings will take on Delhi Capitals.

Do tune in tomorrow. Till then, take care and stay safe.

Kieron Pollard is Player of the Match

Pollard: Thanks to the almighty for watching over me. It is a small ground and we just fell it was the time for a seamer to come and bowl. It was fantastic to get the wickets. I think what mattered was four overs of spin. I had to maximise the over against Jadeja. In a ground like this, couple of sixes were always going to keep us in the game. You have try to maximise that part of the field on the off side. I can't say I am 360 player now but I am trying to maximise on all angles. We have done this time and again. Two wins here gives us a good bit of momentum.

Mumbai Indians captain Rohit Sharma: I think this was probably one of the best T20 games I've ever been a part of. I've never seen a chase like that before. One incredible innings from Kieron Pollard, I'm happy with the effort everyone put in. It was always going to be tough for the bowlers, with the good pitch and small boundaries. These are games in which bowlers will be hit for runs, but you have to keep backing the core players.

We had a brief chat during the interval, we told ourselves it's a good pitch. We wanted to go out and express ourselves, and take the game to the end. That partnership between Krunal and Kieron was huge for us. We back Krunal, we know he's a good batsman and we wanted to give him an opportunity to go out there and do his thing. I thought he could do well and set it up perfectly for Kieron and Hardik.

MS Dhoni, CSK captain: I think it was a brilliant wicket. Difference between the two sides was the execution. How off we were when executing with the ball. We dropped catches at crucial points. When you are top of table, these losses does not hurt a lot. If you look how it really went, we were off target with the ball. It is very important to execute the plans. The wicket is good and it is easy to hit. In a tournament like this, you will win and lose close games and it is always a learning. When you are under the pump, you learn a lot. Irrespective of where we are on points table, we take a game at a time. We hardly focus where we are standing on the table.

Mumbai Indians win. Pollard hits it to long on and runs two and takes his side home.

What a spectacular win for MI. What a night. Possibly the best game of the season so far. Pollard has single-handedly taken his side over the finish mark. He had luck on his side but he made sure he took full advantage of it and batted till the last ball. MI have stolen this victory from the hands of CSK. Precious two points collected by the Men in Blue. They are defending champions for a reason.

20th over, Ball 5:  Ngidi to Pollard, high full toss and Pollard smashes it over long leg for a maximum. 2 needed off 1.

20th over, Ball 4:  Ngidi to Pollard, he punished it, ball goes to Thakur who does well to stop it at deep square leg. 8 needed off 2.

20th over, Ball 2:  Ngidi to Pollard, top ball, right in the block hole but Pollard manages to put bat on it and ball goes to fine leg boundary for four. 12 needed off 4.

OUT! Neesham gone for a golden duck, tried to scoop Curran for a six but ended up hitting it to fielder at deep square leg. Neesham c Thakur b Sam Curran 0(1)

OUT! Hardik is gone, third time unlucky, slower from Curran, Hardik wanted to clear the long off boundary but could not generate enough power and this time Faf takes the catch. Hardik Pandya c du Plessis b Sam Curran 16(7)

OUT! Curran strikes, right in the block hole, hits Krunal's toes and he has to go as umpire quickly raises the finger. Was quick and was slanting in to Krunal. Brilliant stuff. Krunal Pandya lbw b Sam Curran 32(23)

OUT! Moeen Ali strikes, de Kock looked to play on the on side and closed the face of the bat against the turning ball, but he closes it too early, ball takes the leading edge and Ali takes the catch in his follow through. de Kock c and b Moeen Ali 38(28)

OUT! Jadeja strikes, removes Surya. A quicker one, turned in to him, and Surya was looking to play it on off side, inside edge into the hands of MSD. Suryakumar Yadav c Dhoni b Jadeja 3(3)

50! A blistering half-century for Ambati Rayudu, he gets there in just 20 balls!

50! Yet another IPL half-century for Faf du Plessis, he's been scoring for fun!

50! Half-century up for Mooen Ali, just how good has he been tonight? Excellent, excellent work from the Englishman.

OUT! Gaikwad is sent back to the dugout in double-quick time by Trent Boult! Ruturaj Gaikwad c H Pandya b Boult 4 (4)

Mumbai Indians win. Pollard hits it to long on and runs two and takes his side home. What a spectacular win for MI. What a night. Possible the best game of the season so far. Pollard has single-handedly taken his side over the finish mark. He had luck on his side but he made sure he took full advantage of it and batted till the last ball. MI have stolen this victory from the hands of CSK. Precious two points collected by the Men in Blue. They are defending champions for a reason.

Preview: Mumbai Indians (MI) and Chennai Super Kings (CSK) face each other for the first time in IPL 2021. The biggest rivalry of the tournament is happening in this edition quite late than expected. MI and CSK are two of the top teams in the competition with Mumbai having won the title five times while Chennai lifting the trophy thrice.

In the current season, CSK are coming into this mouth-watering contest as the favourites, having won all their games so far since losing the first match against Delhi Capitals (DC). After last year's average outing, where they even failed to make the cut into the playoffs, CSK worked on their weaknesses, fixed their squad and came back strongly in IPL 2021. CSK openers Faf du Plessis and Ruturaj Gaikwad have been in red hot form and MI's new-ball bowlers will have their task cut out against the pair. Du Plessis especially has looked in great touch in this season. CSK bat deep and the majority of their batsmen are in good form. The only weakness that one may see is in their bowling department with Shardul Thakur being expensive at the start and the spinners not being able to control the flow of runs at times.

Mumbai Indians have plenty of problems. A key reason in their inconsistent show so far in the league is due to their average batting display. The middle-order and the late middle order is short of runs and the top 3 are blowing hot and cold. The fact that Quinton de Kock was among runs in the last game should give Rohit Sharma huge confidence. Trent Boult has not been able to pick wickets early on and he would like to quickly change that. MI will also be hoping their No 3 Suryakumar Yadav gets a big one against CSK. He has had some starts but has failed to capitalise on those.

Delhi's wicket should begin to slow down with spinners coming back into action again. The dew may also play a part so the teams may look to bat second at Kotla.

Opting to bowl, MI shot CSK out for 97 with pacer Daniel Sams (3/16 from 4 overs) running though the MS Dhoni-led side's top-order with three quick wickets in a fiery opening spell, and then huffed and puffed to overhaul the small target of 98 with 31 balls to spare

Mumbai Indians completed the task with 31 balls to spare after struggling at 33 for four in the fifth over.