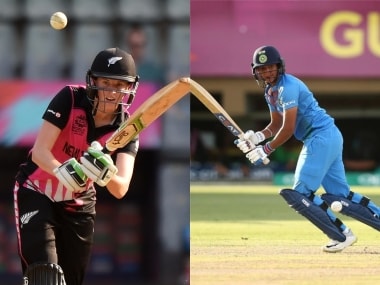 New Zealand win. Rowe taps it to point fielder and runs. Mandhana was wayward again with the throw as the batters complete the series-winning single. White Ferns win 2nd WT20I by 4 wickets.

OUT! Mansi Joshi strikes, adjusts her length, targets the off-stump, gets it fuller and Martin misses it altogether, the ball hits the stumps. Katey Martin b Mansi Joshi 13(12)

OUT! What is happening in the middle? Miracle is indeed happening here. Two wickets in this over. Peterson plays the glory shot but hits is straight to Deepti Sharma on long-on. India team is jubilated. Anna Peterson c Deepti Sharma b Arundhati Reddy 0(1)

OUT! Big one this is. Is this the wicket India wanted? Hell, yes! Bates walks back as she tries to clear the off side field but holds on to Rodrigues at mid-off. Bates c Rodrigues b Arundhati Reddy 62(52)

OUT! This is the wicket India wanted and what a stage to get this one. Satterthwaite tried to sweep and the leading edge flew up in the air, Priya Punia caught her safely at square leg.
Satterthwaite c Priya Punia b Poonam Yadav 23(20)

Fifty partnership has come up between Bates and Satterthwaite in no time. Fifty for Bates as well. This match will be over very soon if these two keep hitting the way they are doing now.

OUT! Gurrey tries to be aggressive, tries to go over the mid-off but does not connect, the bottom edge flies to Mansi Joshi at mid-off and she does not make a mistake. Caitlin Gurrey c Deepti Sharma b Radha Yadav 4(11

OUT! Devine comes out to Radha Yadav but does not connect, the inside edge hits the timber and she has to leave after scoring 19 off 16. Devine b Radha Yadav 19(16)

It's over! Five from the last over and the wicket of Reddy. New Zealand need 136 to win the second T20I and the series

OUT! Reddy had not other option as she tried to go aggressive only to give a catch to Kerr at mid-off.

OUT! STUMPING! Rodrigues had to keep the runs coming as she danced down the ground but missed the ball and Martin did the remaining

FOUR! FIFTY! A bit short and Rodrigues pulls it to mid-wicket to bring up her half-century

OUT! A direct hit from keeper Martin and Deepti has to walk back. Rodrigues drops it on the pitch and charges for a single but Deepti wasn't ready as keeper Martin chases the ball and hits the stumps before Deepti could get into the crease.

OUT! India lose Harmanpreet. Half-volley but Kasperek keeps it slow forcing Harmanpreet to play it early as she skied it to Satterthwaite at cover.

OUT! Big wicket! A few quiet overs and Mandhana gets out trying to up the ante. The opener wanted to go big and tonked the full delivery over the bowler only for Bates to take the catch at long-on.

OUT! Punia gets out trying to play a big shot. Punia wanted to go big but her mistimed lofted straight drive was take comfortably by Satterthwaite at mid-wicket.

There is still one match to go in the series and Harmanpreet Kaur and Co would look to finish things on a high. They bettered their game in 2nd WT20I. And would look to finally pack a punch in the last one. But that is still two days away and India will have chance to correct some mistakes.

We will meet you again. For now, you can switch to men's game which is to start in about 40 minutes. Click here to check over-by-over updates and LIVE score of the 2nd T20I.

Amy Satterthwaite, NZ captain: We could have done it in a more easier way. It is good place to be. We need to keep winning series from hereon.

Suzie Bates, Player of the match: Yeah, we did not take it easy on ourselves as it went down to the last over. We just loved the atmosphere in both the games. We just love playing here. Hopefully, the boys can win today too.

Harmanpreet Kaur, losing captain: We should give credit to our bowlers. It was not a decent total but they still fought hard. We were 30 runs short. The played better cricket than us but still one more game to go, so we will need to correct our mistakes in that match.

A roller-coaster of a game in the last five overs. India picked up quick wickets in this phase and pulled the game back but could not handle the nerves in crunch moments. That stumping chance that slipped out from Tania Bhatia's hands would hurt her and the team.

New Zealand win. Rowe taps it to point fielder and runs. Mandhana was wayward again with the throw as the batters complete the series-winning single. White Ferns win 2nd WT20I by 4 wickets.

Rowe taps to the mid-wicket and runs, the throw is wayward. 2 needed off 2 now.

OUT! Mansi Joshi strikes, adjusts her length, targets the off-stump, gets it fuller and Martin misses it altogether, the ball hits the stumps. Katey Martin b Mansi Joshi 13(12)

FOUR! Short and wide, Martin hits it through the covers to get a boundary.

India Women vs New Zealand Women, 2nd T20I Live Score: There is still one match to go in the series and Harmanpreet Kaur and Co would look to finish things on a high. They bettered their game in 2nd WT20I. And would look to finally pack a punch in the last one. But that is still two days away and India will have chance to correct some mistakes. We will meet you again. 2nd WT20I preview: Mithali Raj's inclusion could be the bone of contention for Indian women, who will be eyeing a much improved showing with the bat when they face an upbeat New Zealand in a must-win second T20 International here on Friday.

Indian batting is prone to collapses, especially from a position of strength. Chasing 160, India were going strong at 102 for 1 but Smriti Mandhana and Jemimah Rodrigues' dismissal proved fatal for the visitors who collapsed to 136 all out, bringing back memories of their inexplicable surrender in the the 2017 50-over World Cup final against England.

Mithali's years of experience could have come in handy in the series opener on Wednesday but she was dropped from the eleven.

Debutant Priya Punia opened with Smriti Mandhana but lasted just five balls while another youngster Dayalan Hemalatha too could not do much at number four.

Mithali was not picked as the team management is looking to build a squad for the 2020 T20 World Cup in which the senior player is unlikely to feature. However, the youngsters did not deliver and she could be back for the second game considering that the series is on the line.

New Zealand on the other hand are riding high on momentum, having beaten India comprehensively in the previous two contests, the final ODI and the first T20.

The team is reliant too much on Mandhana's contribution at the top.

"Practically, I would say I have to bat till 20 overs that is the best option. The more I bat till 18 overs, we won't collapse because if the top three or four batters can bat till the 18-20th overs then the rest can revolve around them, so tactically that is what I will try to do," said Mandhana after the 23-run loss.

Skipper Harmanpreet would be itching to produce a match-winning effort, something she has not done so far on the tour. The situation was tailor made for her in the previous game but failed to take the team past the finishing line.

They will have to be wary of pacer Lea Tahuhu, who struck thrice in Wellington and was named played of the match despite opener Sophie Devine's 48-ball 62.

The Karnataka government last week decided to impose complete lockdown for a week in Bengaluru urban and rural from 14 July (tomorrow) given the growing cases of COVID-19.

The Poco M2 Pro is expected to come with a 64 MP main camera, an 8 MP ultrawide sensor, a 5 MP macro lens, and a 2 MP depth sensor.