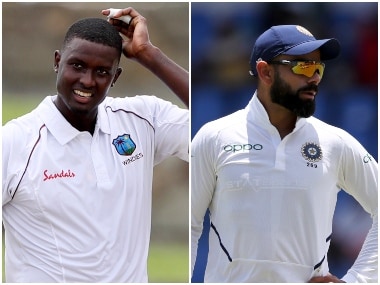 This series win has already taken India to top of World Test Championship standings. It has been a great tour for India with three series victories and a lot of captaincy record for Virat Kohli. The tour now comes to an end. The next assignment for India is against South Africa at home on 15 September. For now, it's time for us to say goodbye!

For India, a commanding tour ends on a powerful high - won each of the eight games played across formats. Also go well clear atop the initial World Test Championship standings on account of dominating a two-Test rubber. The pace attack continues to become increasingly rampant with every passing tour (let's thank our stars for Bumrah), but the standout gains from this series, without a shadow of doubt, have to be Ajinkya Rahane and Hanuma Vihari. Three 50+ scores each for both, and the next time India play a Test, they'll have the confidence of trusting a middle-order with recent runs under their belt.

Most wins after first 48 Tests as a captain:

Virat Kohli, winning captain: Pretty comprehensive again from our side. We played good cricket, and getting the result in the manner you want is crucial as a team. We were put under pressure in a couple of sessions. While batting, there were some tricky situations but it took some character from the boys. Hanuma was the standout batsman, but Ajinkya in the second innings, Mayank in the first innings, Ishant with the fifty - it was an innings full of grit.Captaincy is just a 'C' in front of your name. It's a collective effort. West Indies will understand the areas they need to improve. From a bowling point of view, West Indies were amazing. Kemar and Jason were their standout bowlers. If they get enough runs on the board, they'll be a very dangerous opposition in Test cricket.

Hanuma Vihari, Man of the Match: Happy with a hundred in this match after missing out on that in the previous one. We needed to be patient on this wicket because it had something in offer for the bowlers. I have not played a Test at home. Looking forward to that. It will be great to play in front of the home crowd in India.

Jason Holder: We are disappointed. We didn't play a complete game in both matches. Lots of problem with the batting. Need to put scores and fight out the tough periods. It's an individual thing (batting). Quite a bit of time till we play the next Test match so time for players to take some ownership. Pleased with the bowling. We were just commenting that we have been on the field in every single day of this Test series, and every single time our bowlers have delivered.

Virat Kohli has now won 28 Tests as a captain of India - the most by an Indian captain, eclipsing MS Dhoni’s 27 Test wins.

That’s that! 2-0 to India was the expected outcome of this result, but West Indies’ inspirational series win over England in their last assignment had raised hopes of a competitive series - well, weren’t we hugely let down on that count.

The margins of victory paint the entire story: 318 runs in Antigua, 257 runs in Jamaica. The Windies barely won any sessions, leave alone even winning an entire day. Cornwall and Brooks offer Some hope going forward, but as was said on the broadcast, a lot of soul-searching for the hosts to do as a Test side.

Largest wins for India in away Tests - by runs:

Jadeja wraps up the Windies innings with the wicket of Jason Holder. The West Indies skipper has been cleaned up. 2-0 clean sweep for India. Eight consecutive Test series victory for India.

Hanuma Vihari, Man of the Match: Happy with a hundred in this match after missing out on that in the previous one. We needed to be patient on this wicket because it had something in offer for the bowlers. I have not played a Test at home. Looking forward to that. It will be great to play in front of the home crowd in India.

Jadeja wraps up the Windies innings with the wicket of Jason Holder. The West Indies skipper has been cleaned up. 2-0 clean sweep for India. Eight consecutive Test series victory for India.

There was an opportunity to hit the full ball through the line and Roach went for it with hard hands but could only manage the thick outside edge as Pant took the catch behind the wicket.

Shami got the ball to seam back in as it took the inside edge off Cornwall's bat. Pant had to put in the dive to his left for the catch but the keeper did ever so well to take the catch. Windies are losing wickets at a very fast rate.

A huge relief for Jadeja as this was not ruled as a no ball. It was very close to being called a no ball though. The spinner got the batsman to glove it to second slip with the help of extra bounce.

OUT! WHAT A THROW!

An amazing Kohli pickup and direct hit from point area leads to the dismissal of Brooks. The batsman got one past through the legs of silly point and got into a mixup wanting to take a single. He was sent back by Holder but fell short as Kohli found the stumps.

FIFTY! FOUR! Brooks flicks the half-volley in front of deep square leg off Bumrah to bring up his maiden Test half-century

Who else other than Bumrah would have broken the partnership. The pacer got the cross-seamer to seam away just enough to take the outside edge of Blackwood to Pant. Kohli is excited.

WICKET! A fullish ball from Ishant Sharma to Hetmyer, who drives it to Mayank at extra cover.Now, Windies are starting to lose wickets, and as a result, will hurt their momentum. Hetmyer c Agarwal b Ishant 1

WICKET! Chase is struck lbw by Jadeja as India get the much-needed breakthrough. Chase goes for the review after the original decision is out, but replays show that the ball was touching the leg-stump. And there are three reds along with umpires call. Roston Chase lbw b Jadeja 12

Pitch report: "There are huge cracks all round towards Courtney Walsh end. There's inconsistent bounce and Windies batsmen will need to keep it in mind. Towards Michael Holding end there are cracks but it's better than Courtney Walsh end. Still there will be bounce and lateral movement. So, it's a good cricket pitch," Daren Ganga.

India vs West Indies, LIVE Cricket Score, 2nd Test, Day 4 at Jamaica Latest Updates: Jadeja continues. Five off the over. Roach nudges one to leg for a single before Holder slams the fuller ball to midwicket fence for a boundary.

Day 3 report: West Indies batsman Darren Bravo was struck on the helmet in the final over on day three as India turned the screw against West Indies in the second test in Jamaica on Sunday, closing in on victory and a 2-0 sweep of the short series.

Bravo appeared to be unharmed after being hit by a Jasprit Bumrah short ball, and was unbeaten on 18 at stumps at Sabina Park in Kingston.

West Indies were 45 for two in their second innings after being set an unlikely target of 468 for victory.

Pace bowlers Ishant Sharma and Mohammed Shami picked up one wicket each as Saturday hat-trick man Bumrah was kept wicketless in his five overs.

Brathwaite was caught behind off Sharma and Campbell was taken at third slip off Shami.

Earlier, West Indies resumed at 87 for seven in their first innings, and were all out for 117 as India took just over an hour to mop up the tail.

Bumrah bowled only four more overs and did not add to his wicket tally, finishing with 6-27 as Sharma, Shami and spinner Ravindra Jadega took a wicket apiece.

India captain Virat Kohli decided against enforcing the follow on, and West Indies’ pace attack was up for the fight early, with Kemar Roach particularly impressive.

He picked up 3-28, including a first-ball dismissal of Kohli caught behind, the ninth duck of the captain’s career.

Kohli’s swift departure set up the possibility of a second hat-trick of the match and Roach came perilously close to pulling off the feat when Ajinkya Rahane got an inside edge, only for the ball to whistle past the stumps on its way to the fine leg boundary.

But having survived that scare, Rahane settled in and compiled 64 in an unbeaten 111-run partnership with Hanuma Vihari (53) before Kohli declared at 168 for four.

Roach took his career tally to 193 wickets, passing Wes Hall to be alone in ninth of the all-time West Indies list and within sight of catching Andy Roberts (202).