A new year, and decade, has rolled in and the Indian cricket caravan rolls on. Victory - a thumping one at that - in the deciding third T20I against Sri Lanka at Pune on Friday handed yet another series win.

It kept India undefeated, across formats, in their ongoing home season (six wins and one draw out of seven series); it extended India’s prolific run in T20I contests at home (one defeat in 11 bilateral series since 2016); it also continued India’s fairly enviable overall T20I record in the recent past (two losses in 17 assignments since September 2017).

But coming as it does at the start of a year that culminates with the T20 World Cup, the focus, more than winning, was on inching closer to an ideal squad combination for the trip to Australia come October. That longer-term vision was amply clear when Virat Kohli spoke after losing the toss - it may have been a series-decider, but India weren’t shying away from testing their bench, or even their approach. India beat Sri Lanka 2-0 in the three-match T20I series with the first match washed out. AP

Each of India’s four T20I series during this home season were decided in the final game, and India batted first on all four occasions. The first, against South Africa in September, saw a combustion that allowed the Proteas to ease to a series-levelling victory in Bengaluru; the second, against Bangladesh in November, could easily have gone the way of the visitors if not for an inspired spell of bowling from Deepak Chahar (with assistance from Shivam Dube); but the two most recent wins - against West Indies last month, and now this one against Sri Lanka - will provide an abundance of relief.

Prior to the West Indies decider, India had won only 56% of games batting first since 2017 - compared to a success rate of 81% when bowling first. The more recent past in that time-frame was revealing an obvious failure to post above-par totals when taking first strike: in nine T20Is since July 2018 where India batted first, their average score was 161/6 - unsurprisingly, they had lost seven of these nine encounters.

The last two instances of India batting first in a T20I, however, signal a much-needed course-correction. A possessed top-order display had inspired a gargantuan total of 240/3 against West Indies at the Wankhede; weeks later, a more all-round batting effort produced another winning total of 201/6 against the Lankans.

It’s been a rather delayed awakening to this facet of India’s T20I cricket, but they might just be onto something here, at long last.

Rahul vs Dhawan: A welcome problem of plenty? 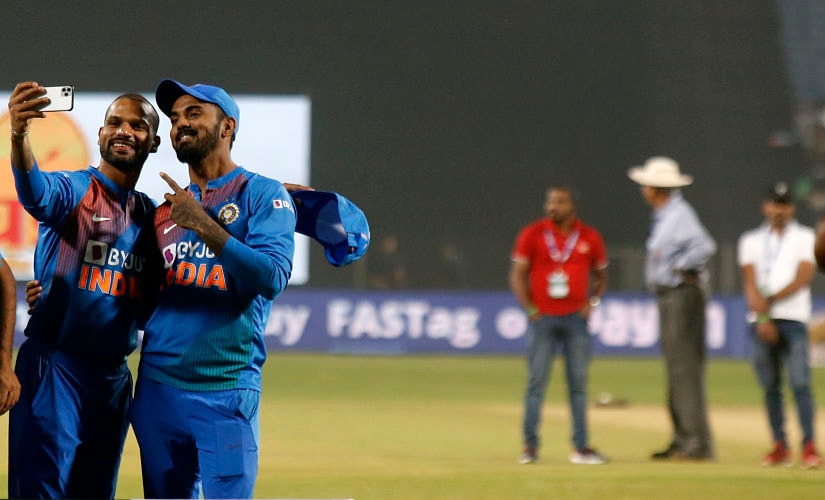 Shikhar Dhawan (L) and KL Rahul (R) are the two contenders to fill the solitary opening slot alongside Rohit Sharma for the T20 World Cup. AP

The Indian skipper might have voiced his displeasure with the outside narrative pitting his two openers for this series against each other, but there really isn’t any other way of putting it. India’s eventual XI, once they reach Down Under, will only have room for one out of KL Rahul and Shikhar Dhawan - and while all recent evidence does suggest it ought to be Rahul partnering Rohit Sharma, Dhawan did his seemingly-fading chances no harm at Pune.

Dhawan’s 36-ball 52 was a little fortuitous, in that it could have easily read one off four balls had Dasun Shanaka not raced several yards in from the square-leg boundary, but the left-hander did find his groove from there on to reach his first T20I half-century in 15 innings since November 2018. More vitally, Dhawan’s strike rate of 144.44 was his best in 13 T20I innings since February 2019, and while it might not be an extraordinary number at all, there’s more to it than meets the eye.

In all T20 cricket, Dhawan has faced more than 25 balls in 12 out of 35 innings since the start of 2019 - and only twice had he managed a better strike rate than he did on Friday. That, in one go, reflects both the weakness and the opportunity when it comes to Dhawan’s spot in the Indian T20I setup.

Despite his gains from the series-decider, the 34-year-old should, in all probability, find himself outside the XI when India play their next T20I (in New Zealand in February), because this is what Rahul has done since replacing an injured Dhawan for the West Indies series: 62 off 40, 11 off 11, 91 off 56, 45 off 32 and 54 off 36.

The wise money, undoubtedly, must lie with the younger, right-handed option; India’s affinity towards Dhawan - and the southpaw’s ‘big-event’ touting - however, means that this is likely to be a race that goes the distance.

Pandey proves a point on rare day off the bench 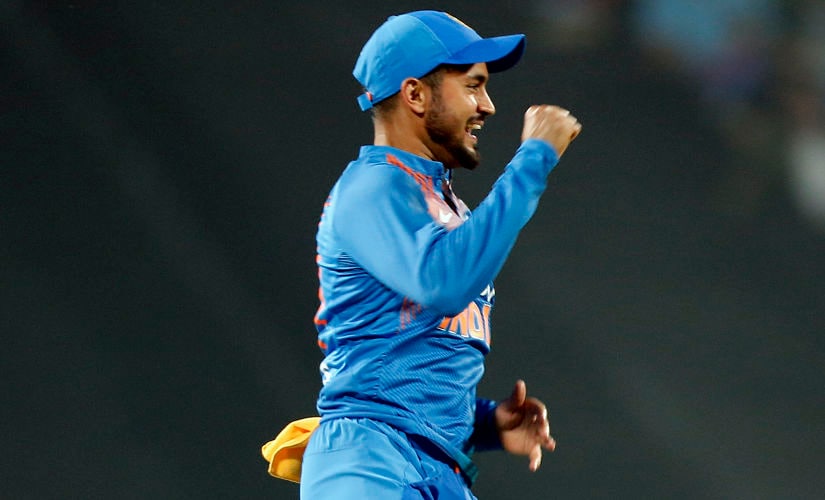 Manish Pandey has excelled in domestic cricket and proven himself in limited international opportunities and yet isn't a regular fixture in the side. AP

Manish Pandey must be a man with flowing reserves of patience. He is, arguably, among the best Indian batsmen in the T20 game at present: since 2019, Pandey has 1069 runs from 32 innings at a hefty strike rate of 151.63 - his average T20 innings in the said period is 33 runs off 22 balls.

He’s found himself in every Indian T20I squad since the end of the 2019 World Cup. Yet, out of a total of 13 completed matches, Pandey has only found his name on the team-sheet five times. He didn’t do himself any favours by failing to capitalise on a rare regular run in the XI in the West Indies back in August, returning scores of 19(14), 6(8) and 2*(5).

As is now the norm, Pandey bossed the domestic season, blossoming with the bat while leading Karnataka to both the limited overs titles. But that only converted into two playing XI berths in 10 games while with the Indian team. Strangely enough, both his inclusions were for series-deciders.

Against Bangladesh, at Nagpur, Pandey came in with India on 139/4 in 16.1 overs, but had barely got off the mark when he had to welcome number seven Shivam Dube - who had faced all of four deliveries in international cricket at the point - to the crease. India were 144/5 in 16.5 overs at the time; they finished with 174/5, Pandey staying not out on 22 off 13.

Versus Sri Lanka in Pune, Pandey came in much earlier, at number four and with 51 balls remaining in the innings. Six overs later, however, India had slid to six down; number eight Shardul Thakur was yet to have batted in a T20I. India were 164/6 in 17.4 overs; they finished with 201/6, Pandey staying not out on 31 off 18.

So that’s two must-win games, two collapses, and two conducive (albeit contrasting) partnerships to drive home the team’s advantage in the clash. India’s maiden IPL centurion is now over 30 years of age; he probably merits more than just that regular appearance as a substitute to shore up the fielding capacity of the side. 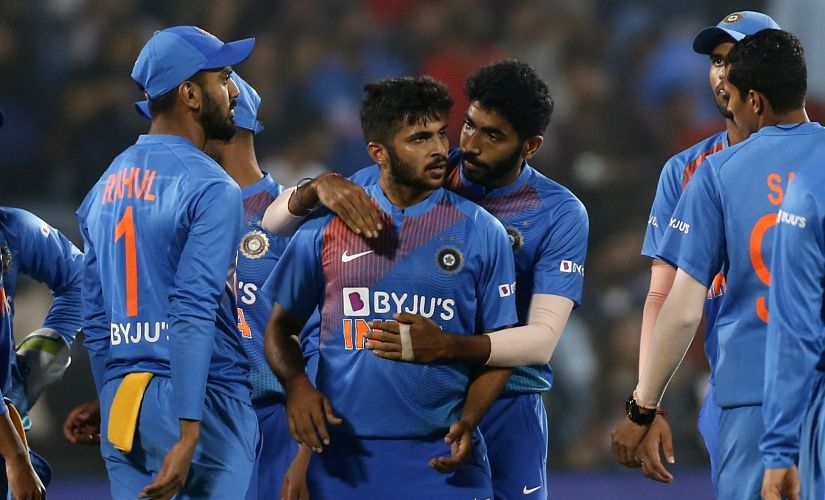 Shardul Thakur picked up five wickets in two T20Is against Sri Lanka but more tellingly has made an impact with the bat as well. AP

Shardul Thakur and Navdeep Saini, both victims of ill-timed injuries in the recent past, were beneficiaries of other injuries among the Indian fast-bowling personnel in making the squad for this series against Sri Lanka and the upcoming ODI series against Australia. Both, in varied ways, have added to the rapidly-rising arsenal that is India’s pace stock.

Saini, who marked his return from injury by winning a maiden ODI cap in the series-decider against West Indies at Cuttack in December, announced his acceleration with a Man-of-the-Series winning effort versus the Lankans. The 27-year-old’s numbers this series were awe-inspiring: five wickets in two games, an average of 9.20, an economy under six and a wicket every nine balls. But more than that, the sight of Saini castling the stumps to bowl Danushka Gunathilaka at Indore and Kusal Perera at Pune will form the lasting memory of this rubber. His steepling pace and improved control (26 dots out of 47 deliveries) put him in a fanciful position looking ahead to Australia; according to CricViz, since his debut in August, only Kane Richardson and Mitchell Starc have induced a higher percentage of false shots in T20Is than Saini.

Thakur’s bowling numbers for this series were almost identical (if slightly better): five wickets in two games, an average of 8.40, an economy of six per over and a wicket every eight balls. But it’s with the other suit that the 28-year-old is doing his case the best favour - fresh off his six-ball 17* in that same Cuttack clash versus West Indies where Saini was handed his ODI debut, Thakur furthered his batting credentials with an unbeaten 22 off just eight deliveries, which propelled India from a 180-ish total to one in excess of 200. These two cameos in the past month may well be nothing but flash-in-the-pan, and Thakur’s career batting record may still not inspire a great deal of confidence, but India haven’t had too many bowlers capable of chipping in with the bat in recent years - and in a T20-centred year, that could yet be a telling USP.

Sri Lanka’s serious cause for concern Sri Lanka have quite a few issues to fix with the T20 World Cup in October in Australia. AP

“Men versus boys,'' exclaimed Russell Arnold from the commentary box as India wrapped up their fifth successive T20I series win over Sri Lanka - the longest-such run for any team against a particular opposition in the format. The Lankans, in fact, haven’t tasted a series victory in any format of the game against India since 2008. You’d think, in a World Cup year, that it would make this a match-up a team would dearly be looking to avoid.

But leave alone India, or the other big guns - Sri Lanka first have the qualifiers to contend with if they are to make the Super 12 cut. And given their form in this format in the last three years, there’s a lot to correct for the men from the Emerald Isle.

Sri Lanka had begun 2017 with series wins in South Africa and Australia, followed by a drawn rubber at home against Bangladesh; but they've been in freefall ever since. Eight wins out of 31 since May 2017 - the worst record for any of the 16 teams that will be part of the T20 World Cup. Remove the 3-0 clean-sweep of Pakistan in October, and the 2014 World T20 champions have claimed just three wins in their last 17 completed T20Is dating back to March 2018.

In their qualifying group Down Under, Sri Lanka will be pitted against Ireland, Oman and Papua New Guinea; the other group involves Bangladesh, Namibia, Netherlands and Scotland. With two teams from each group proceeding to the Super 12 stage, it would be foolish to consider Lasith Malinga’s unit as anything but favourites.

But that doesn’t alter the reality that if the T20 World Cup were starting today, Sri Lanka would be entering it with the least wins and the worst win-loss ratio since May 2017 out of all 16 participating teams.