India’s experimentation in the pace department is in the right direction for T20 World Cup, and Navdeeep Saini - Shardul Thakur have made good individual cases for that third/fourth pacer slot at the start of the year itself.

The T20 World Cup might be a good nine months away but the Indian team management knows already what is needed to fill up the missing spots. The batting may look imbalanced, but they are simply waiting for Hardik Pandya’s return from injury. It is in bowling, where key experimentation is taking place, with one eye firmly on Australia.

The first T20 against Sri Lanka in Guwahati may have been washed out, but the template was set therein. India fielded three pacers, despite Jasprit Bumrah’s return, and it resonated with how they picked a similar bowling combination on the 2018-19 tour of Australia. 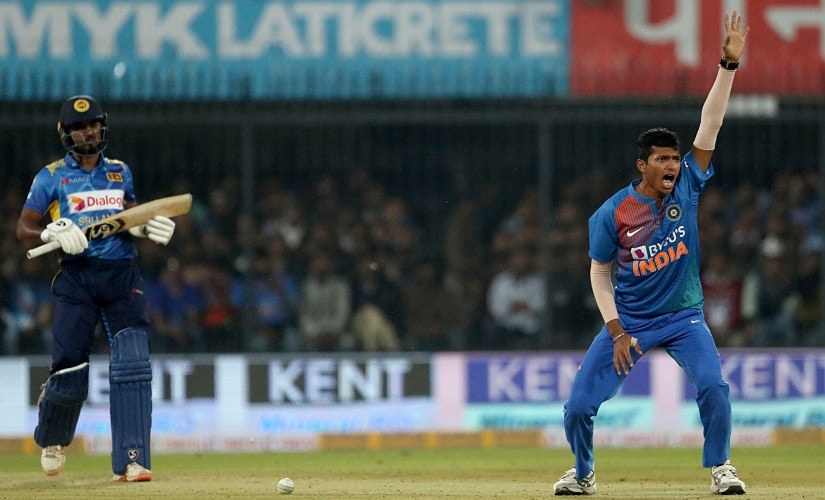 Navdeep Saini displayed his variety in seam bowling during the second T20I against Sri Lanka. AP

The bottom-line herein is simple – the big grounds and hard pitches Down Under warrant a pace-heavy bowling attack. And thus, India’s T20 World Cup squad composition is likely to be determined by the number of fast bowlers are included among those fifteen players.

Count on one hand then – Bumrah, Bhuvneshwar Kumar and Mohammed Shami. If fit, they will be the first-choice options along with Pandya (as the fast bowling all-rounder), but that term – fit – is up in the air at present. Bumrah has just returned while Kumar is nursing a string of injuries. Pandya is only on his way back, while Shami needs to be wrapped in cotton wool. These four were key members of India’s ODI World Cup and their current fitness issues are a result of the high amount of cricket played in the last two years.

While this situation begs for better workload management, it also opens doors for young speedsters to barge in. Deepak Chahar is a prime example – using the opportunities offered since the World Cup, and with winning performances against Bangladesh and West Indies, his name has been underlined for the preparatory months ahead.

And there are others like him, who now can take advantage of Chahar’s injury break and Shami’s rest, to make a case for themselves. We have to begin with Navdeep Saini, who shone through in Indore on Tuesday night. Searing pace is one way to describe his opening spell, with impressed nods from Virat Kohli all night. Like Chahar, Saini first got his chance in West Indies after the World Cup, but injury put his journey on hold.

From the very beginning, there was an obvious differentiator between the two. While Chahar was more in the Bhuvi-mould, moving the ball at average pace, Saini bustles through with a clean action and generates heady pace. In Indore, he clocked 151 clicks at one instant – his average speed on Tuesday night was 145-plus. At that pace, slight variations can cause trouble to batsmen, which Danushka Gunathilaka found out to his disadvantage. Some yorker that was, nearly unplayable!

It was important to note how Kohli underlined Saini’s pace value. The speedster has been traveling with the Indian contingent for some time now. He was part of the World Cup squad and spent a lot of time bowling in the nets – it is now an accepted protocol of bringing up any pacer into first-team contention. As such, the step up has come at the right moment for Saini.

What he brings to the table is priceless – raw pace. There is only one other pacer currently on the Indian international roster who does so, and that’s Umesh Yadav, someone who has been discarded from white-ball cricket. Shami and Bumrah have good pace too, albeit both Saini and Yadav clock quicker. The underlying point here being Saini’s pace could become a pivotal weapon on the harder Australian decks this coming October. Shardul Thakur picked up three wickets in the T20I against Sri Lanka in Indore. AP

Does this make him a potential part of India’s World Cup plans? Indeed. Even so, the situation isn’t completely stitched up yet. There is also Shardul Thakur, who made his return to international cricket against West Indies. He boasts of skidding pace, replete with variations, which we witnessed in the penultimate over’s three Lankan wickets.

There is no doubt Thakur is the last in a long list of pace bowlers currently in international contention. But this is still a chance for him to continue to be a part of the conversation, for injury and workloads might work some advantage in his favour. And this is where the Indian team management is working differently from how they prepared for the ODI World Cup.

Time and again they had used the same set of pacers, which not only wore them down but also didn’t allow much room for experimentation. Luckily, their bowling plans didn’t ask for more than three pacers, as the pace-spin combination was pre-set.

In the T20 World Cup scenario, no spin permutations are final just yet. It augurs in favour of India’s pacers, especially with Kohli preferring a troika. India’s experimentation in the pace department is in the right direction, and Saini-Thakur have made good individual cases for that third/fourth pacer slot at the start of the year itself.