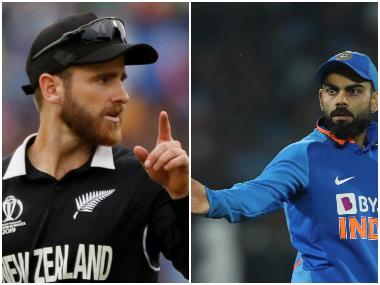 The fans needed a reaction from New Zealand after they suffered a series sweep at home against India in T20Is and now they have registered a series weep over India in ODIs. More importantly, the most impressive thing is the manner in which the hosts won the series. They were the better side in all the three departments. And will carry this confidence into the upcoming Test series. For India, it's important to take a step back, relax and fight back with vigour. That's it from our side for today. We will see you during the Test series. Good bye!

This is the first ever player of the series award for Ross Taylor in ODIs.

Henry Nicholls who is Player of the Match, has performed well throughout the series. His performance in this series - 80, 41, 78.

‪— They have done five clean sweeps out of their last seven home ODI bilateral series’.‬

Ross Taylor has been adjudged the Player of the Series!

Kane Williamson: An outstanding performance. Very clinical. India put us under pressure in every game, but we managed to do it again. The second half was outstanding to see. Clinical effort against a great side. We know how good they are in all formats. The clarity on the roles the guys had was important. (Tests) Obviously the team changes quite a bit and the roles are quite different, but an outstanding effort. Great series to be part of. (Shoulder) It's alright. It's recovering well, which is a good thing.

Virat Kohli: The games were not as bad as the scoreboard suggests. But the way we fielded and bowled, the composure wasn't enough to win games. Didn't deserve to be on the winning side this series. Haven't played so badly, but we didn't grab opportunities. They played with lot more intensity than we did. We are excited for the Test series.

Henry Nicholls is the Player of the Match!

Nicholls: Nice to come out here today and make it 3-0. It's been good. I have been able to put good partnerships. It was important hitting into the backend. His (Guptill) experience certainly helps me. You sort of play second fiddle out there. We put on a good opening stand in all three victories. After the T20s, we came out and played the brand of cricket we wanted to play.

What a comeback for the Black Caps!

Superbly played, New Zealand. Battered and bruised after Australia, beaten 5-0 in the T20Is against India with more Super Over pain and now take the ODIs 3-0 (without Boult, Ferguson, Henry and, for some of it, Williamson) #NZvIND

Hard to believe given his status as a world-class bowler!

Ross Taylor has been adjudged the Player of the Series!

Virat Kohli: The games were not as bad as the scoreboard suggests. But the way we fielded and bowled, the composure wasn't enough to win games. Didn't deserve to be on the winning side this series. Haven't played so badly, but we didn't grab opportunities. They played with lot more intensity than we did. We are excited for the Test series.

It's over! New Zealand complete an ODI series sweep over India. CdG dispatches the full toss to mid wicket fence to take New Zealand to a five wicket win.

FIFTY! FOUR! CdG's inside edge escapes the stumps and runs down to the fence as he completes a 21-ball fifty

Kohli's decision to bring Chahal back into the attack has worked in his favour. New Zealand are succumbing here without pressure. There was no need for Neesham to go aerially on the fuller delivery but he did and Kohli had positioned himself at mid wicket just for that catch.

Is there a twist in the tale? Nicholls dismissal has certainly made things more interesting. The opener was excellent with his execution today but went chasing a wide delivery there and ended up edging it to the keeper. Huge wicket for Shardul.

Taylor finally gets out in the series. Soft dismissal this. He was looking to punch down the fuller delivery through covers but failed to get it to the pitch of the ball as it jumped a bit and went for a catch to Kohli at short cover.

Williamson would be gutted with the dismissal. A harmless short ball from Chahal on middle and leg as Williamson played the pull shot from backfoot. He had an open field on leg but somehow managed to pick Agarwal at mid wicket.

Chahal finds the first breakthrough for India with a peach of a delivery. The leggie got the ball to pitch on middle and leg which spun away from the bat to hit the top of the off-stump. Guptill had taken his front foot away to avoid getting out lbw. NZ 106/1 (16.3).

FIFTY! Half-century for Guptill in just 29 deliveries. It has been all-attack from the opener today and he gets to the landmark with a pull shot six off Thakur.

FOUR! Fine end to the Indian innings, as Saini goes for an inside out loft over mid off, with the ball eventually beating the chasing fielder to ultimately reach the boundary cushion. India finish on 296/7 after being asked to bat by New Zealand.

OUT! Full toss from Bennett, Thakur top-edges this to send the ball miles up in the air. De Grandhomme settles under the ball and safely pouches it to result in the fall of the seventh wicket. IND 280/7

OUT! Both set batsmen are gone off consecutive deliveries as Pandey gets caught by Santner at long on while looking to go downtown. Bennett's on a hat-trick now! IND 269/6

OUT! Rahul targets the long off region once again, and this time Jamieson doesn't let the chance slip away, putting in a dive to his right to complete a fine catch. End of a wonderful knock by Rahul, as he departs for a near-run-a-ball 112. IND 269/5

Another milestone up for the Men in Blue, this time the 100-partnership being completed with a single by Rahul at the start of the 47th over! The pair have scored at more than run-a-ball so far, consuming 94 deliveries for the 100 runs. IND 262/4

CENTURY NO 4 FOR KANNAUR LOKESH RAHUL IN ODI CRICKET! The ever-depenedent all-round cricketer once again proves his value for the Indian team, anchoring the innings after Iyer's departure and laying the foundation for a final flourish for the Men in Blue. He topped the run charts with some hard hitting in the T20Is, and is also among the runs in the one-dayers. Takes 104 balls to bring up this century, getting there with a brace in the 45th over. IND 251/4

Fifty partnership up between Rahul and Pandey for the fifth wicket off 49 deliveries — another quality stand that has put the Indians back on their feet after the dismissal of Iyer. Rahul completes the milestone with a single in Jamieson's eighth over. IND 212/4

FOUR! Steered between extra cover and mid off off the final delivery of the over by Rahul, who had survived a run-out scare just the previous delivery. That brings up the double hundred for the Men in Blue. IND 203/4

Fifty up for KL Rahul off 66 deliveries, the Indian wicket-keeper-batsman bringing up the milestone with some quality sprinting between the wickets to complete a double. He has to anchor the innings now with Pandey yet to find his feet at the crease, and hopefully stay till the end. IND 170/4

OUT! The partnership's broken as soon as it touches the century mark! Iyer chips the ball towards short midwicket, where de Grandhomme lunges forward to complete a fine catch off Neesham's bowling! IND 162/4

100 of the partnership up between Iyer and Rahul for the fourth wicket, a much-needed revival for the visitors after losing their third wicket courtesy's Shaw's run out with just 62 on board. Rahul brings up the milestone with a single. IND 162/3

FOUR! Back-to-back boundaries for Iyer off Jamieson, this one off a top-edge off an attempted pull that guides the ball over the keeper's gloves and away to the long stop fence, as the India No 4 brings up his eighth ODI half-century off 52 deliveries. IND 137/3

Fifty of the partnership up between Iyer and Rahul for the fourth wicket, a steady stand between the two middle-order batsmen with 59 deliveries being consumed along the way. A much-needed partnership for the Indians after losing three early wickets, including that of the skipper and a well-set Shaw. IND 112/3

OUT! Just when a partnership was starting to build between Shaw and Iyer, the former departs after failing to make it to the striker's end safely while coming back for a second run. He falls 10 short of his fifty as a result. Sharp throw by CdG from fine leg and equally sharp work behind the stumps by Latham. IND 62/3

OUT! Kohli's gone, and India lose two wickets inside the first powerplay! Kohli slashes hard at a back-of-length delivery outside off, and ends up getting caught at third man. IND 32/2

BOWLED! Another disappointment for Mayank Agarwal, as Kyle Jamieson draws first blood with a beauty of a delivery that moves away from the batsman after pitching along middle and hits the top of off. IND 8/1

Preview: New Zealand will hope to avenge their 0-5 hiding at the hands of India in the T20I series by completing a 3-0 sweep in the one-dayers when they take on the Men in Blue in the third and final game in Mount Maunganui on Tuesday.

New Zealand staved off a late resistance from the Indians at Auckland to register a 22-run win in the second ODI and clinch the series 2-0. The Black Caps had earlier chased down 348 in the first game of the series at Hamilton with four wickets and nearly two overs to spare.

Ross Taylor played a key role in both Kiwi victories, remaining unbeaten on 109 and 73 at Hamilton and Auckland respectively and is currently the leading run-scorer in the series by a fair distance. The 'Player of the Match' award in the second game, however, went to debutant Kyle Jamieson for his all-round performance of 25 not out and 2/42.

Shreyas Iyer (52) and Ravindra Jadeja (55) revived the Indian innings after the visitors lost wickets early in their innings, including that of captain and prolific run-getter Virat Kohli, but failed to get their team home.

India needed 23 to win from 10 balls when Jadeja holed out to Colin de Grandhomme at long off off James Neesham's bowling to be the last man dismissed as New Zealand broke into celebrations, having collected their first series win against India in six years.

The Black Caps will be bolstered by return of regular captain Kane Williamson, who missed out on the fourth and fifth T20Is as well as the first two one-dayers and is confirmed to make his return at Tauranga. Wicket-keeper-batsman Tom Latham led the Black Caps successfully in his absence.

Williamson had smashed 95 in his last appearance for the Kiwis to nearly lead them to victory in the third T20I at Hamilton, and will hope to start off from where he had left should he be match-fit on Tuesday morning.

India, on the other hand, will hope to end their limited-overs leg of the tour of New Zealand on a happy note with a consolation win. Prithvi Shaw and Mayank Agarwal, opening in place of Rohit Sharma and Shikhar Dhawan, have got starts in the first two one-dayers, but haven't quite got the big partnership the team management would've expected from them.

Virat Kohli himself is due for a big score, and KL Rahul — the leading run-getter in the T20I series — will hope to return to form after a blip at Auckland.