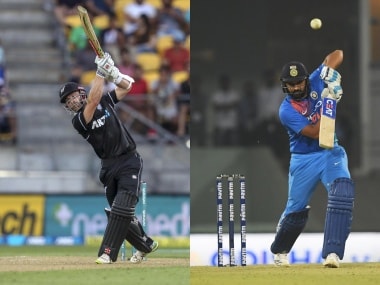 A better performance from India and they would be happy that it was not just a better performance. They came into this game to win and that's what they ended the game with. The series is 1-1 tied and this makes the Hamilton clash a mouth-watering one. Who's complaining? Nobody really.

Rohit Sharma: Very pleased to see my team's bowling and we were quite clinical with the bat as well. We executed our plans better today after learning from our mistakes. It's important to understand the mistakes that we made, it's been a long tour for everyone. Third match is going to be an interesting tie.

Williamson, NZ captain: We missed some tricks with the bat. It was not a 180-plus wicket. It was slightly trickier at times. We did not help ourselves by not having partnerships. There are lot of positives when you play India. As a side, we are aware what is to be done. We want to play with freedom. Fantastic crowd. 1-1. Exciting opportunity for us in Hamilton.

Krunal Pandya: It felt really nice to contribute for the team. It's always special when you contribute to a win. The dimensions are quite different from Wellington, the straight boundaries were short and I had to adjust my length to it. Looking forward to the decider in two days time.

Krunal Pandya is Man of the Match.

This is India's first win in New Zealand in T20Is. They lost all the three T20Is which they played before. U.S.A. is the only country where they have not won a T20I yet among countries in which they have played T20I matches.

Spanking shot and Pant has finished this. Number three is a good move for him and gives ample game time to make an impression for the World Cup. India have levelled the series and the tour goes into a live game on Sunday. Better than dead rubbers of ODIs. 1-1!

Pant finishes the game in style with Dhoni watching from the other end. Fullish delivery and Pant smashes it past the bowler for boundary.

Easy for India. Dhoni and Pant doing the former's favourite thing to pass time in the middle- collecting singles and doubles. No panic. India just 3 away from series-levelling victory.

Pant finishes the game in style with Dhoni watching from the other end. Fullish delivery and Pant smashes it past the bowler for boundary.

DROPPED! Top-spinner from Sodhi leads to top edge off Pant but not the top effort from Taylor who dropped a catch while running back to the fine leg

OUT! Shankar hit one boundary and then a six and then got carried away. Hit one straight to the fielder at deep mid-wicket. Shankar c Southee b Daryl Mitchell 14(8)

OUT! Ferguson special. Perfect bouncer that almost hit Dhawan on the helmet. He was evading the ball more than playing it, in the process the ball touched the gloves, went up in the air and de Grandhomme caught it at point. Dhawan c de Grandhomme b Ferguson 30(31)

OUT! Rohit gone and that's the wicket NZ were eyeing for. Not the best delivery in the game, Rohit tries to clear the deep mid-wicket boundary but has been held on over there. Southee takes a comfortable catch. Rohit c Southee b Ish Sodhi 50(29)

Fifty for India at the end of powerplay. Rohit Sharma would be happy with this effort and this stand has already sent a positive message to dressing room. India's game till now in the chase.

Khaleel dismisses Southee on the last ball of innings. New Zealand finish their innings with 158 on the board. India need 159 to level the series.

OUT! BOWLED! Wide yorker and Santner chops it on to his stumps trying to drive it through off

OUT! RUN OUT! Excellent throw from the deep from Shankar helps India get rid of Taylor

OUT! Big Wicket as de Grandhomme falls! It was in the slot but the batsman placed it straight in the hands of Rohit at cover.

OUT! Krunal gets the big wicket of Williamson! It was short and Williamson went back to pull it to mid-wicket but Krunal threw it in qucik as the ball skidded off the pitch to hit the thigh pads.

OUT! Most weird dismissal of all. Mitchell given out lbw, he reviews it as he feels there was an inside edge. Hotspot confirms the same but there's no spike on snickometer and he's given out. Williamson was quite surprised but Mitchell has to walk back

The game has come to a halt! Confusion all around. Mitchell was given out lbw but he reviewed as he felt there was an inside edge. DRS confirmed the same but he still has been given out.

OUT! Krunal loops it and Munro couldn't resist the temptation. Went back to drive it over cover but ended up giving a catch to Rohit

OUT! Edge and gone! Good delivery and good comeback. A bit short of length and it holds it outside off line as Seifert tries a wild swing, edging the ball to keeper.

India vs New Zealand (IND vs NZ), 2nd T20I Live Score: A better performance from India and they would be happy that it was not just a better performance. They came into this game to win and that's what they ended the game with. The series is 1-1 tied and this makes the Hamilton clash a mouth-watering one. Who's complaining. Nobody really. We will be back with the coverage of the 3rd T20I on Sunday that is 10 February, 2019. Hope to catch you again. Bye-bye for now. The second India vs New Zealand T20I is being telecast on Star Sports Network. The New Zealand-India live streaming will take place on hotstar.com. Click here to know when and where to watch the second T20I between New Zealand and India.

2nd T20I preview: A strong comeback will be expected from India after the hammering from New Zealand in the series-opener when the two teams square-up in the second T20 International at Eden Park here on Friday.

After suffering their biggest loss in T20 Internationals in terms of runs on Wednesday night, India don't have a lot of time to introspect with just 24 hours separating the two games.

It was the kind of day when nothing went right for India who let New Zealand amass 219 before surrendering meekly in the steep chase.

Opener Tim Seifert took the Indian bowlers to cleaners with a 43-ball 84 and visitors must have a plan to contain him on Friday.

Not even the seasoned Bhuvneshwar Kumar was spared as he, alongside Hardik Pandya and Khaleel Ahmed, leaked 12 runs an over.

The team could replace Ahmed with either Siddharth Kaul or Mohammad Siraj, who warmed the bench on Wednesday.

The spinners, Krunal Pandya and Yuzvendra Chahal, did alright but the team management will also consider including chinaman Kuldeep Yadav.

The lack of fight in the run chase was a big disappointment, as mentioned by captain Rohit Sharma in Wellington. Despite having eight batsmen in the eleven, India lost by 80 runs.

"As a team, we have been good at chasing down targets which is why we play with eight batsmen. We believe that whatever the target is in front of us we can chase it down, but we just couldn't do it tonight," said a disappointed Rohit after the game.

He himself would like to lead from the front after scoring 1 on Wednesday and a significant contribution will also be expected from Rishabh Pant, who is in the running for a World Cup berth.

He could not do much in Wellington, getting four off 9 balls before spinner Mitchell Santner bowled him with a fast yorker.

All-rounder Vijay Shankar was promoted to number three and did alright with a 18-ball 27. It remains to be seen if he gets another shot at the same position or the team brings in Shubman Gill, who would be desperate to perform after the two failures in ODIs.

While it is a must-win game for India, another victory will seal the series for the hosts who were outplayed 1-4 in the preceding ODIs.

Captain Kane Williamson could not be more happy with the showing in the first T20 but wants his team to fully focus on the job at hand.

"It was a complete performance that doesn't happen everyday and hope we can keep the momentum through the series having set the tone," he said.

The dangerous opening duo of Colin Munro and Seifert put the Indian pacers under tremendous pressure early on in the innings and dismissing them cheaply will be crucial for the visitors' chances.

Coming back into the side after playing just one ODI against India, veteran Tim Southee proved his immense value with tidy figures of 17 runs in four over including three wickets.

The spinners, Ish Sodhi and Santner, too were on top of the Indian batsmen, sharing two wickets apiece.