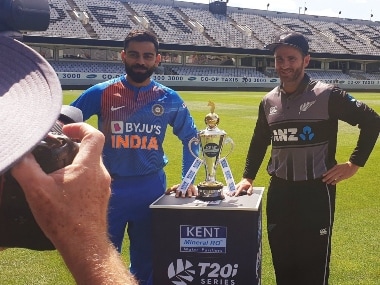 India vs New Zealand 1st T20I Live Updates: Iyer completes the job, finishing unbeaten on 58 and positions himself as a middle-order mainstay for the Men in Blue in the limited-overs formats with two sixes and a four, including the winning hit over deep midwicket off the last ball of the over that completes an emphatic six-wicket win with an over to spare for the visitors to go 1-0 up in the five T20I series.

Just the start that the Indians wanted to their tour of New Zealand, collecting a six-wicket victory to grab the 1-0 lead in the T20I series — courtesy a positive spell from Jasprit Bumrah and fifties by KL Rahul and Shreyas Iyer. The partnership between Iyer and Manish Pandey, worth 62 off just 34 deliveries at the time of India successfully chasing down the target with an over to spare, will perhaps be the key takeaway for the Men in Blue from this win given how iffy their middle order has looked in recent times. That India were able to keep their calm in a shaky position and complete the chase without the presence of a set Kohli bodes well for them.

That's it from us today. See you all in a couple of days' time, with the Men in Blue and the Black Caps facing off at the same venue on the Indian Republic Today!

"We just landed two days ago, and playing a game like this sets it up nicely for the whole tour. We had 80 percent of India fans here. We never spoke of the jet lag in the team We're just going to back our skills. If we focus on things that are not important then you're taking attention away. We were just looking forward to going out to the park, and that's the reason why we got the results today. You cannot be harsh on anyone on this pitch, New Zealand batted really well today. Our bowlers did well to restrict them to less than 210 today," says the victorious India skipper Virat Kohli.

Kane Williamson: A lot of positives out there. It is hard to defend here at Eden Park. India showed their class. It was a high scoring game. With the ball in hand, taking a few wickets early on would have built some pressure, chasing is their strength and they showed that today. Taking the pace off seem to be working okay. They kept putting us under pressure. We need to find ways to pick up wickets. It was nice to build some partnerships. Guys came in and played their roles pretty well which is good to see.

"It's really coming overseas after a home tour. Yeah we had lost two wickets in succession, and it was important to build a partnership. Knew the ground was short, and we could cover up on the run rate. Amazing experience. My first time playing at the Eden Park, and looking forward to the same support from the same crowd next game," says Shreyas Iyer, who has been adjudged the Player of the Match.

‪This is the first T20I match in which five fifty-plus scores were registered.‬

Highest targets successfully chased down against New Zealand in T20Is:

Shreyas Iyer. Remember the name. He has grown by leaps and bounds in the last six months and this should be a crowning moment in his short career thus far. This knock shows having a proper number four and giving him experience in the middle helps in such situations. Some finish this by the Mumbai youngster and India go 1-0 up with an over to spare.

Iyer completes the job, finishing unbeaten on 58 and positions himself as a middle-order mainstay for the Men in Blue in the limited-overs formats with two sixes and a four, including the winning hit over deep midwicket off the last ball of the over that completes an emphatic six-wicket win with an over to spare for the visitors to go 1-0 up in the five T20I series.

SIX! Shreyas Iyer finishes off in style, the ball almost disappearing in the night sky before landing in the stands beyond deep midwicket, as India complete a six-wicket win with an over to spare! IND 204/4

SIX! Shreyas Iyer finishes off in style, the ball almost disappearing in the night sky before landing in the stands beyond deep midwicket, as India complete a six-wicket win with an over to spare! IND 204/4

FOUR! Iyer works the ball in the direction opposite to the one that fetched him a six off the previous delivery, and completes his 2nd T20I half-century in style, a fifty that looks set to be a match-winning one! IND 196/4; need 8 to win from 10 balls

SIX! Iyer makes room and lofts the ball over long off for a maximum to bring the equation down to almost run-a-ball! Brings up the fifty stand off just 29 deliveries with this shot! IND 192/4; need 12 off 11

OUT! Now Dube's gone after a promising start, holing out to Southee at long on as India lose their fourth wicket with less than 150 on board. IND 142/4

OUT! Brilliant catch by Marty Guptill at deep midwicket to dismiss the set India captain, and the Black Caps have suddenly turned things around with two quick wickets! IND 121/3

OUT! New Zealand finally break the second-wicket stand between Rahul and Kohli, the former getting caught by Southee at long off after a miscued slog off Sodhi that brings his terrific innings to an end. IND 115/2

OUT! Rohit gets a thick leading edge, offers Taylor the simplest of catches at backward point as India lose their first wicket with less than 20 on board. IND 16/1

New Zealand finish with a strong total on the board. 203/5 it is. India need 204 to win the first of the five T20Is. Small ground, yes, but it will still be a task to chase this down. Bumrah was outstanding. He finishes with figures of 1/31. There was an injury concern and but he got up and completed the over. Hopefully, there is nothing too serious. See you when the chase begins.

FIFTY! Taylor complete his half century off just 25 balls. What a knock this has been from the veteran. This is first T20I in six years. Celebrate it, Ross!

OUT! Seifert falls cheaply, slower from Bumrah deceived him completely, he wanted to over the long on ropes, and was not able to read the trick ball, went with the shot, paid the price for it, Iyer took a good catch near the ropes. Seifert c Shreyas Iyer b Bumrah 1(2)

OUT! A wicket on the last ball of the over for Chahal, he bowled wide and slow, KW reached out for it and ended up playing it early, top edge flew up in the air and Kohli came under it to take a safe catch. Chahal has the last laugh! Williamson c Kohli b Chahal 51(26)

OUT! Jadeja comes into the attack and picks up a wicket on just the first second of the spell today. He fired it on to his de Grandhomme's leg stumps and he flicked it directly to Dube at short fine leg. Two quick wickets for India and they are right back into this game. de Grandhomme c Shivam Dube b Jadeja 0(2)

OUT! Huge relief for Thakur who has been under the pump for a while, short and slow in pace, Munro pulls, but it goes straight into the hands of Chahal was places at just the right position at backward square leg. Munro c Chahal b SN Thakur 59(42)

FOUR! Fifty for Munro, edge off his bat off Chahal and ball runs down for four runs behind the stumps. That shot brings up Munro's fifty as well. Good knock from him.

OUT! Guptill is gone and it is Rohit Sharma who has brought his fall with a very good catch at long leg. Dube pitched it short and Guptill pulled, it went high but did not have the legs to go over the ropes. Rohit set himself up at the ropes and took the catch, before realising he may end up touching the ropes, lobbed the ball inside and then caught the ball. Guptill c Rohit b Shivam Dube 30(19)

India vs New Zealand 1st T20I Live Updates: Iyer completes the job, finishing unbeaten on 58 and positions himself as a middle-order mainstay for the Men in Blue in the limited-overs formats with two sixes and a four, including the winning hit over deep midwicket off the last ball of the over that completes an emphatic six-wicket win with an over to spare for the visitors to go 1-0 up in the five T20I series.

Preview: After an impressive comeback ODI series win over Australia, India face the challenge of a long New Zealand tour which kicks off with the T20I series in Auckland.

It's the first time India will play a five-match T20I series and it will be a different challenge. However, their first aim will be to improve their record against the Kiwis. They have won just three and lost eight of the 11 T20Is they have played. The last time they toured New Zealand, at the start of 2019, they won the ODI series 4-1 but lost the T20I series 1-2.

Kohli has spoken of having intensity right from the word go and that's what they would be looking to do, get a positive start with a win in Auckland. The Indian top-order which has been in breathtaking form will be the key and they would look to take advantage of a relatively weakened Kiwi bowling attack that is without Trent Boult, Lockie Ferguson and Matt Henry who are all out injured.

It will be a challenge for the Indian bowlers as well, adapting to the small grounds in the country. However, they will be buoyed by the performance of the pacers in home T20s where they outperformed the spinners. It will be another challenge for the likes of Navdeep Saini, Shardul Thakur, and Shivam Dube but an opportunity as well to take one step forward in locking their places in their side. Bumrah, who looked rusty against Australia, will be looking to get into the groove as soon as possible while Mohammed Shami will look to carry forward the momentum from the Australia series.

Kohli has confirmed that KL Rahul will keep wickets and this heats up the competition between Manish Pandey, Rishabh Pant and Sanju Samson for the middle-order spot.

The Kiwis, on the other hand, would be looking to bounce back after a 0-3 hammering at the hands of Australia in Tests.

India start off as slight favourites as they look to continue their winning juggernaut.