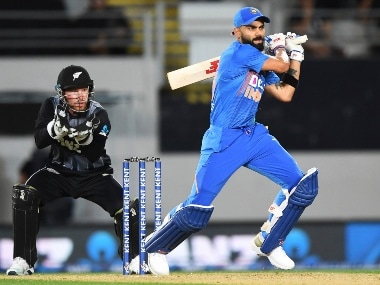 India vs New Zealand 2nd T20I Live Updates: SIX! Dube smashes Southee over long on to finish the match. India win by seven wickets. They go 2-0 up in the series. The template seems to be changing for India with Iyer and Rahul performing, taking the side over the victory line. Happened in this match as well, with Iyer scoring 44 and Rahul scoring unbeaten 57. Back to back fifties for Rahul, a walk in Eden Park for him.

India take 2-0 lead in the five-match series. And as said earlier, India seem to have adopted a new way to win matches and that is when Rohit and Kohli fail with the bat. Rahul and Iyer, the young guns, are in red hot form and they are making sure, they take the side to the winning mark as well. Hosts have been less than ordinary in the match. They will need some luck for sure in Hamilton but more importantely a better effort with bat and ball and sharp planning as well. So, we will see you on the 29 January. Good bye for now.

Virat Kohli, India captain: We backed it up with another good performance today. Bowlers stood out. Line and lengths were good. It was a very good feature for us as a team. That helped us restrict to 132 for 5 on a very good wicket. I think the pitch was enough for 160. We understood the angle of the field better in this match. Ball gripped for the spinners. Chahal was also good. All pacers made good contributions. When you display a complete peformance like that, you end up winning so convincingly. The dimensions of Hamiltion ground are better than Auckland and we are ready for the challenge.

Rahul: Obviously different circumstances. I knew what I had to do, and knew I couldn't do it the same way as two days ago. We had lost seniors Rohit and Kohli early, and I had to stay in and finish the game. How I read the situation and read the game, that has gotten better. More often than not, I have come up with the right shots.

Kane Williamson, New Zealand captain: It was a tough day. The wicket was quite different, and as a batting unit, we needed another 15 or 20. Credit to the way the Indians bowled. They are a class side. Even though we had 130-on the board on a small ground, we had to get early wickets. Once again they showed their experience. there were glimpses that were 15-20 short than where we would've wanted to finish. (On moving to Hamilton next) It's important we have a look at the conditions and do what's best suited and keep moving forward, and that's ultimately what we look forward to.

Who else thinks both New Zealand and England would have been crying had Shreyas Iyer played the World Cup?#NZvsIND

Fine knocks by Rahul and Iyer, but my MOM today @imjadeja for choking the New Zealand batting, giving away very few runs and picking up wickets too. Agree?

What a run KL Rahul and Shreyas Iyer are having!

Clinical from India. 2-0 and now we can seriously start thinking of a series win. This was a top effort.@klrahul11 is easily one of the best T20 players in the world on current form. Excellent from @ShreyasIyer15 yet again.

— This is the first time that India have beaten New Zealand in two consecutive T20Is.

Slow pitch but never mind, India's top AND middle order up to the task. That too without significant contributions from Rohit and Kohli. This is a line that the team management would have liked to hear for so, so long. Finally the pieces are falling into place and the puzzle is getting solved. All-round performance from India, New Zealand completely out played. 2-0 to the Men in Blue without getting into fifth gear.

New Zealand players with 50-plus wickets in T20Is:

Rahul: Obviously different circumstances. I knew what I had to do, and knew I couldn't do it the same way as two days ago. We had lost seniors Rohit and Kohli early, and I had to stay in and finish the game. How I read the situation and read the game, that has gotten better. More often than not, I have come up with the right shots.

SIX! Dube smashes Southee over long on to finish the match. India win by seven wickets. They go 2-0 up in the series. The template seems to be changing for India with Iyer and Rahul performing, taking the side over the victory line. Happened in this match as well, with Iyer scoring 44 and Rahul scoring unbeaten 57. Back to back fifties for Rahul, a walk in Eden Park for him.

OUT! Iyer departs! He wanted to clear the ropes again, smashed it unlike the last time, could not connect it properly, ball ballooned into the air before landing in Southee's hands who took a good diving catch near long off. Shreyas Iyer c Southee b Ish Sodhi 44(33)

Rahul's red hot form continues and like every batsman who wants some luck on his side, he has some for himself as well as the top edge flew for six over third man. The next ball though was hit to deep extra cover in style by Rahul to bring up his fifty, second in the series. In the last two overs, hosts have fielded badly and that has helped the India cause a lot. India need 30 runs in 30 balls. This should be easy.

FOUR! Lovely shot, length ball and Rahul lofts it over the extra cover fielder for four runs to bring up his fifty, another half-century for the man in form.

OUT! Kohli is gone, big wicket for New Zealand and not the best of deliveries to get rid of the batsman of his class, but Southee won't mind, bowled down the leg stump line, Kohli wanted to flick it, but the ball touched the outside edge of the bat and flew to keeper who took a great diving catch to his left. Kohli c Seifert b Southee 11(12)

OUT! Lovely outswinger from Southee and Rohit flashes the blade hard, ball takes the outside edge and flies to slips where Taylor takes a safe catch and Kiwis have their first wicket. Rohit c Ross Taylor b Southee 8(6)

OUT! Ross Taylor doesn't quite make the most of the reprieve earlier in the game as he holes out to Rohit Sharma standing at deep square leg while attempting a slog, hardly getting the connection needed to clear the boundary rope. NZ 125/5

OUT! Swept hard by Kane Williamson, but unfortunately straight to Chahal at deep backward square leg! The New Zealand captain was looking to break the shackles, but instead ended up putting his team under further pressure by throwing his wicket away at this stage without making much of an impact with the bat today. NZ 81/4

OUT! New Zealand are three down now, with Ravindra Jadeja striking off his third delivery of the day! Jadeja fires this a tad quicker, and the ball seems to hold up a bit. CDG chips it back to the bowler, resulting in one of the simplest catches for one of the best fielders in the Indian side. NZ 74/3

OUT! Virat Kohli makes the difference on the field again, this time diving forward to complete a fine catch and dismiss Munro after a miscued shot by the left-handed Durban-born opener towards mid off. NZ 68/2

OUT! Guptill's gone after a fiery start, and India will be mighty happy to get rid of the batsman who was looking extremely threatening at the moment. Scrambled seam from Thakur, taking pace off the bowl and placing it wide outside off. Guptill hits this from the toe end, and ends up skieing it towards long on for a simple catch to the Indian captain. NZ 48/1

India vs New Zealand 1st T20I Live Updates: SIX! Dube smashes Southee over long on to finish the match. India win by seven wickets. They go 2-0 up in the series. The template seems to be changing for India with Iyer and Rahul performing, taking the side over the victory line. Happened in this match as well, with Iyer scoring 44 and Rahul scoring unbeaten 57. Back to back fifties for Rahul, a walk in Eden Park for him.

Report, 1st T20I: Shreyas Iyer's blazing fifty took India to their maiden victory in the five-match series against New Zealand at Auckland. His 29-ball 58 was crucial, in the end, as India required 60 odd runs in the last five overs or so, with two wickets of KL Rahul and Virat Kohli falling in quick succession. Thanks to the win, India have taken a 1-0 lead in the series, with the second match to be played at the same ground on 26 January.

"It's really amazing coming from overseas after a little home tour," Iyer said. "It's a great feeling to win the game and be not out, especially.

"We had lost two quick wickets in succession and it was really important for us to build a partnership at that point of the game because we knew the boundaries are a little bit short and we could cover the run-rate any time. That's what we had communicated in the team and fortunately it worked out."

Colin Munro (59), Kane Williamson (51) and Ross Taylor (54 not out) made half-centuries as New Zealand scored at a consistently high rate throughout their innings to surpass 200.

Munro and Martin Guptill (30) put on 80 for the first wicket in only 7.5 overs. New Zealand lost two quick wickets but Williamson restored momentum in a mid-innings stand of 71 with Taylor, then the veteran Taylor finished off a strong batting performance with his first T20 half-century in six years.

"We always know coming to Eden Park, it's not easy to defend," Williamson said. "They certainly showed their class in chasing down that total.

"We knew batting first we were going to have to get a good score on the board and we were able to do that, but with the ball in hand we need a few wickets early to get ahead of the game."

Black Caps will be aiming to work on their shortfalls and make it 1-1 in the series in the second T20I.