The last time India and New Zealand locked horns was during the World Cup semi-final, when knocks from Kane Williamson and Ross Taylor along with an all-round bowling show from Kiwis guided them to an 18-run win to knock Virat Kohli and Co out.

It may be just a couple of days since Virat Kohli-led India completed a rare 5-0 series sweep over hosts New Zealand in the T20Is, but there is no time to rest on their laurels as the teams travel back to Hamilton for the first of the three ODIs starting on Wednesday.

Jasprit Bumrah produced a brilliant spell of 3-12 in the final T20I on Sunday as the hosts fell short of their target of 164 by just seven runs. Earlier, Rohit Sharma had scored 60 before retiring hurt and KL Rahul’s knock of 45 had guided India to 163-3 in 20 overs. 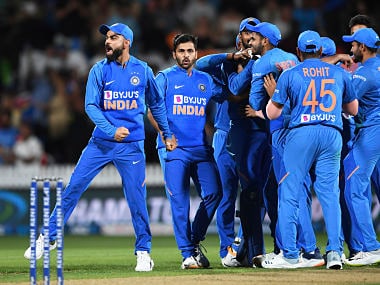 India are upbeat after having clinched the T20 series. AP

Eventually, Rohit was confirmed to have been ruled out of the remainder of the tour after sustaining a calf injury. The Black Caps, too, have been dealt with a big blow after their skipper Kane Williamson was forced to sit out of the first two ODIs due to a shoulder problem, with Mark Chapman being named as the replacement.

Tom Latham will captain the Black Caps in Williamson’s absence.

In terms of India’s latest team news, captain Virat Kohli has confirmed that Prithvi Shaw will make his ODI debut which means that in all probability he will open with Mayank Agarwal, who is Rohit Sharma’s replacement with KL Rahul continuing as a middle-order batsman.

While Hamish Bennett returns to the Kiwis ODI squad for the first time in almost three years, uncapped pacer Kyle Jamieson has received his maiden call-up following a memorable season with Auckland and New Zealand A recently.

This will be New Zealand's first ODI since their World Cup final heartbreak, where they went down to champions England via most boundaries scored after the scores in Super Over were tied.

The last time these two sides locked horns in an ODI was during the World Cup semi-final, when the fifties from Kane Williamson and Ross Taylor along with an all-round bowling display guided them to an 18-run win to knock Virat Kohli and Co out.

The match is scheduled to start at 3pm local time (7.30 am IST) and according to Accuweather the skies will mostly be sunny during the day and clear in the night. So, fans can expect a full-fledged contest in the series opener.