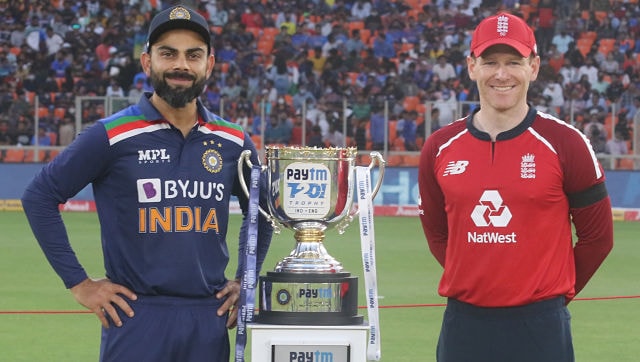 The five-match T20I series between the two top-ranked sides in the world just got a whole lot more interesting! After getting outplayed in the previous game, India bounced back in style with Virat Kohli rediscovering his touch with an unbeaten 73. What’s more, India have found an opener for the future in Ishan Kishan, who announced himself on international debut with a scintillating 56, and has pretty much relegated Shikhar Dhawan to the bench for the remainder of the series. Full credit to the Indian bowlers too for keeping it tight in the slog overs.

The series still is wide open, and it remains to be seen how Eoin Morgan and company respond to the defeat in two days’ time. For now, we bid you all good night. Thank you for following our live coverage of the 2nd T20I!

Ishan Kishan, Player of the Match

Kishan: Credit goes to my seniors who gave me confidence to go there and express myself. It is not easy to come and play against a top team. Mumbai Indians have taught me a lot in that regard. That shot did not go my way today. Today I got a good start and I wanted to finish the game and I was upset I could not. When T Curran bowled one and I smashed him for a six, that was the moment I felt I could hit more. I was feeling very happy that finally I am here and finally all the hard-work has paid off. This knock is a tribute to my coach's dad who passed away a few days ago.

Virat Kohli, India captain: Quite a good game for us. We ticked all the boxes we wanted to, especially with the ball in the first innings. Very smart bowling by all our bowlers. Special mention to Washi. Bhuvi smart operator. Shardul bowled well. It did come on to the bat better, precisely why we chose to bat second on this surface, the dew helped make it better. Special mention to Ishan Kishan. He totally took the game away. Special innings on debut. When you play in the IPL with such dominance like he has against such quality bowlers… he is a fearless character and should continue to back his instincts. He was calculated, wasn’t reckless. Today that counterattacking innings of his and the partnership was what the team needed. (His innings) I had to shift the focus back to the basics for the game. I’ve always taken pride in doing the job for the team. When you have your family with you, then your management’s so good. (On Pandya bowling) I have to give credit to him for bowling at least three overs now. He is going to be a vital part of this team moving forward. It’s about managing his workload now. (On the opposition) You have to play at your best to beat them.

Eoin Morgan, England captain: We were in and around par at half-way stage. India bowled well. Less pace in the first innings. Full credit to India for restricting us to this total. Biggest thing for us tonight is to play on the slow wickets. We want to play on such tracks as much as we can and learn and I am glad we played on this wicket but disappointed with the way we played. I think it is advantage in chasing, particularly with dew around. There was no dew today so credit to India. They (Buttler and Roy) are two aggressive guys. You cannot tell a lot to guy like Jos who plays like that. The next game is on a red soil, which looks like a rock and will turn.

Kohli redirects a full toss from Jordan towards fine leg, which would’ve been a boundary had it not been for Morgan placing protection in that area. A dot and a single off the next two deliveries, before Virat finishes it off in style with a four and a six off consecutive deliveries.

India bounce back in style after getting outplayed in the previous game, winning by seven wickets this time with 13 balls to spare! Virat Kohli produces a captain’s knock, remaining unbeaten on 73, with Ishan Kishan (56) having set the foundation earlier in his company.

SIX! Virat Kohli finishes off in style as India win by seven wickets to level the series 1-1! Short from Jordan, the skipper pulls this over the long leg fence to end the game with more than two overs to spare! IND 166/3

FOUR! Full from Jordan, and Virat flicks this nonchalantly through square for his fifth boundary! IND 160/3

Archer back for his final over. Single off each of the first two deliveries, with Virat collecting his fourth boundary with an inside out loft two balls later. Misses while attempting to pull a short delivery off the fifth, and keeps the strike with a quick single off the last ball. Archer finishes wicketless, having conceded 24 runs from his quota of four overs along the way. India need 11 off 18.

FOUR! India cross the 150-mark in the 17th over as Kohli goes for an inside out  loft towards wide long off off Archer, the ball landing safely beyond Jordan's each and running away to the fence. IND 153/3

SIX! Virat Kohli finishes off in style as India win by seven wickets to level the series 1-1! Short from Jordan, the skipper pulls this over the long leg fence to end the game with more than two overs to spare! IND 166/3

SIX! Glorious way for Virat Kohli to bring up his 26th T20I fifty, taking a couple of steps down the track to Tom Curran and lofting the ball over long off with a straight bat, the ball nearly hitting the cameraman just beyond the boundary! IND 141/3

OUT! Pant's cameo comes to an end as he ends up flicking the ball off the toe end of his bat while looking for another big hit, offering Bairstow a simple catch at deep midwicket. He departs after entertaining 26 with a strike rate of 200! IND 130/3

OUT! Rashid finally ends the partnership that was just one hit away from the century mark, as he traps Kishan leg-before just as the southpaw was looking for a reverse slap, missing the ball completely. Kishan tries to review it after a quick chat with Kohli, and the ball is shown to be clipping the off stump. IND 94/2

FOUR! Kishan brings up the fifty partnership with Kohli off the last delivery of the powerplay! Short ball from Tom going down leg, Kishan pulls this behind square with enough power for it to run all the way to the fence! IND 50/1

OUT! Five dot balls on the trot, and Rahul ends up nicking the ball to the keeper off the last delivery, as England are off to a dream start! IND 0/1

Stokes collected one at long on on the first ball. One bye off the second ball. The third ball is a slow off cutter, going across Stokes who wanted to smash it over deep mid-wicket, miscued it. He was frustrated and it reflected in that shot he played on the next ball, hit it flat to Hardik at long on. Sam Curran collects boundary off the last ball to take England's total to 164/6 at end of 20 overs.

OUT! In his arc, Stokes goes for it, smashed it but less pace on the ball from Thakur and Stokes could not time it as well as he would have liked and the ball travelled to Pandya at long on. Stokes c Hardik Pandya b Thakur 24(21)

OUT! Thakur gets his man, smart piece of bowling from the Mumbai boy, slower one, fuller, Morgan went for it and then checked the shot at the last moment, the ball went high up in the air and came down to Pant who took it safely. Morgan c Pant b Thakur 28(20)

OUT! Surya takes this one, although on second attempt. Bairstow attempted a similar shot, wanted to sweep Sundar for a six, did not connect properly, ball went into the skies and came down to SKY, who grabbed it in his second attempt. His first international catch. Bairstow c Suryakumar Yadav b Washington Sundar 20(15)

OUT! Brilliant catch from Bhuvneshwar Kumar at long leg to dismiss Roy, who has fallen short of fifty again in consecutive games. Sundar pitched it up, Roy swung his stick but did not connect well, the ball went high up in the air and Bhuvi completed a fine catch. Roy c Bhuvneshwar b Washington Sundar 46(35)

OUT! Buttler is gone, first ball-duck for the England keeper. Bhuvneshwar bowled an inswinger to him first up and it hit him on the front pad, looked like it was drifting down leg, but umpire Anil Chaudhary had no doubt in his mind whatsoever and raised his finger post the huge appeal by the hosts. Buttler asked Roy about his opinion on the review and he was given the red signal from the partner as well. He goes for 0. Buttler lbw b Bhuvneshwar 0(1)

TOSS NEWS: Virat Kohli has won the toss and India will bowl first.

India vs England Live Score, Live Cricket Score, 2nd T20I at Motera Live Updates: Kohli redirects a full toss from Jordan towards fine leg, which would’ve been a boundary had it not been for Morgan placing protection in that area. A dot and a single off the next two deliveries, before Virat finishes it off in style with a four and a six off consecutive deliveries.India bounce back in style after getting outplayed in the previous game, winning by seven wickets this time with 13 balls to spare! Virat Kohli produces a captain’s knock, remaining unbeaten on 73, with Ishan Kishan (56) having set the foundation earlier in his company.

Preview, 2nd T20I: India will look to bounce back from the eight-wicket drubbing in the first T20I by England and level series in the second game at Motera in Ahmedabad.

England displayed all-round show in the first match, using the conditions to the best use, bowling out India cheaply before their top-four smashed the runs in quick time to seal the victory.

Roy and Buttler raised 50 runs in the first six overs. Roy was out for 49, trapped leg before wicket by Washington Sundar, and Buttler made 28.

Jonny Bairstow was unbeaten on 26 and Dawid Malan on 24 after clubbing a winning six off Sundar.

Archer took a wicket off his second delivery when Lokesh Rahul played the fast bowler back onto his stumps. Hardik Pandya and Shardul Thakur fell in the paceman’s last over off successive deliveries.

Captain Virat Kohli, who struggled in the preceding 3-1 victory in the test series against England, fell for 0 to legspinner Adil Rashid as India fell to 3-20 in the first five overs and couldn’t recover.

Shreyas Iyer hit a fighting 67 off 48 balls in an otherwise below-par batting effort by India. Kohli asserted at the end of the game that India batsman played bad shots and that was something that needs to be corrected in the next game.

"We just weren't aware enough of what we had to do on that kind of pitch, I think lack of execution of the shots that we tried to play out there in the middle is something we have to address as batsmen that it wasn't an ideal day on the park," said Kohli.

It would be interesting to see where Rohit Sharma is being rested for the first two games, returns to the side or not as India look to find answers at the top order with Shikhar Dhawan and KL Rahul both failing in the first match.

Also, Kohli might interested to play Navdeep Saini considering how India missed a fast bowler who can bowl in 140s.