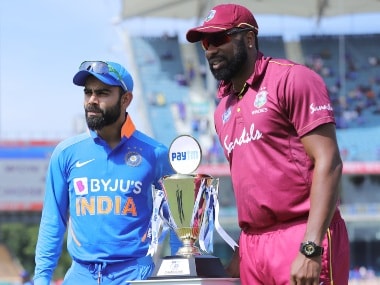 India vs West Indies, LIVE Score, 3rd ODI at Cuttack: The first ball from Cottrell is slower one but down the leg-side so it's a wide. Jadeja plays and misses the next ball. The third ball results in a single. Cottrell goes for the bouncer but it's over the head and umpire calls it wide. The next one goes for a six and then Shardul smashes a boundary. Two singles to end the over. 15 runs from the over. India need 7 from 12 balls.

That's all we have for tonight. Hope you've enjoyed our coverage. Indian cricket team caps off an excellent year with a superb series victory over the West Indies. Apart from losing the World Cup semi-final against New Zealand, the year was a happy one for Virat Kohli's team.

We will be back again with the cricketing action on 5 January when India will take Sri Lanka in a T20I series.

Hope you have a great new year and keep loving the amazing game of cricket.

Most Man of the Match awards in international cricket:

Virat Kohli: Having done it so many time you have a bit more calmness. With dew becoming a factor and the pitch was a good to bat on and all you need is a short partnership. From there the opposition usually crumbles. Jaddu (Jadeja) took a lot pressure off me and even Shardul taking pressure off me. It was outstanding to see others finishing the game. I did have a nervous stay out there when I was walking out but when I saw Jaddu being so confident. They just changed the game in three overs. Watching from outside is way more difficult than being in the middle of a run chase. It [2019] has been one of the best years in Indian cricket that has ever been apart from that half an hour that we play in the World Cup. But apart from that, the way we've played has been satisfying. We will keep chasing that ICC trophy, our vision it to win it, but to be a part of this time is beautiful thing. Having a bunch of fast bowlers who can bowl out any opposition anywhere - them taking the attention away from the spinners in India is a huge achievement.  When we travel now we think we have it in us to win every series not just a match.We are in the process of trying out people, see how they react under pressure. In a few years we will have to go through the transistion again and keep the Indian cricket as strong as they had it if not stronger and we will keep striving for it.

Rohit Sharma: We wanted to win this game. It was a good batting track, carry on the partnerships. The way KL and Virat batted, not to forgot Jadeja's contribution. I also enjoyed Shardul's pull shot. Extremely grateful for the year I've had. A World Cup victory would have been nice but as a team whether red ball or white ball cricket, the team came together really well.

India chased down a total both the times successfully.

Rohit Sharma is the Player of the Series

Virat Kohli is the Player of the Match

West Indies skipper Kieron Pollard: I don't think there's much to be disappointed about. Very proud of the guys. They showed their mettle. There's a lot to look forward in the future and I'm very excited.

This is India’s 10th consecutive bilateral ODI series win (2+ ODIs) against West Indies - the most for them against an opponent, going past nine series wins against Sri Lanka, beginning from 2005.

India clinch the third ODI by four wickets and eight balls to spare. They have also won the series 2-1.

Jadeja goes for a quick single and the near fielder comes up with a direct hit. The call goes to third umpire but it's a no-ball so India win the match anyway because they needed only one run.

Short from Cottrell and Shardul pulls the ball over fine-leg fielder for a maximum! This is a big hit!

Keemo Paul is the man! Kohli goes for the push outside off-stump but drags the ball to the stumps. Big, big wicket. Kohli b Paul 85.

Kedar Jadhav walks back to the pavilion. The ball from Cottrell nips back in and it shatters the stumps through the gates. Jadhav is in shock. Kedar Jadhav b Cottrell 9(10).

Pant plays away from the body but the ball hits his bat and crashes on to the stumps. Keemo Paul strikes! Pant b Keemo Paul 7(6).

Another wicket for the Windies. Short ball from Keemo Paul. Iyer goes for the pull but finds the fielder at deep square leg. Good low catch by Joseph. Shreyas Iyer c Alzarri Joseph b Keemo Paul 7(7).

Short from Joseph and Rahul goes for the half-pull-half-flick shot. The ball takes the edge and falls into keeper's gloves. Big breakthrough for the Windies. Rahul c Shai Hope b Alzarri Joseph 77(89).

Rohit departs after making 63. Goes for the cover-drive but edges the ball to the keeper. Holder gets the breakthrough. Rohit c Shai Hope b Holder 63(63).

FIFTY! Crashed! Pollard clobbers this wide of long-off for four and there is was nothing really the fielder could do. This has been a terrific half-century by Pollard

OUT! Thakur gets his man! Slower short ball from round the stumps that was digged in short and Pooran skipping down the track is only able to slice it to Jadeja runs in from  at deep point to snaffle it. End of a breathtaking innings from Pooran.

OUT! GONE! Navdeep Saini with a terrific yorker to clean up Roston Chase. Genuine pace from Saini. Straight and full, right at the base of the off stump and Chase was late to bring his bat down in time. This wicket will do a world of good to his confidence. He leaps in joy and celebrates with his teammates.

OUT! Hetmyer's gone and India can breathe a sigh of relief! Saini has his first ODI wicket. Pacy short ball by Saini and Hetmyer who was riding his luck in last couple of overs runs out if it as he pulls a ball high in the air to fine leg fielder.

What a comeback for Mohammed Shami! He returns to the bowling crease and gets the big scalp of Shai Hope! Excellent length by Shami, pitched on off stump and just seemed to have seamed a little into the right-hander and through the defences of the in form Shai Hope.

Chance goes down as Rishabh Pant drops a catch behind the stumps. Kuldeep bowled a tossed up delivery from round the stumps, inviting the drive from Chase. He got a thin outside edge and Pant fluffs it the ball ricochetes off Pant's pads onto the stumps and there is an inquiry for stumping but Chase had his foot grounded when the the lights in the stumps went up.

OUT! Ravindra Jadeja strikes in his first over. He breaks the opening stand with the wicket of Evin Lewis. The southpaw couldn't resist the temptation of taking on the left-arm spinner as he goes for a big slog sweep. Flighted on middle and Lewis bends on his knee to smash it through mid wicket but gets the lower half of the bat and the ball goes high and straight down long-on's throat. Saini did well to keep his eyes on the ball and gobble the catch.

Drinks called on the field.

DROPPED! Lewis absolutely crashes a wide delivery from Saini to point where Ravindra Jadeja dives to his left and is parallel to the ground, he does get two hands to the ball but isn't able to cling on. Very tough chance for Jaddu, especially because the ball was traveling extremely quickly. Lewis earns a life on 14.

TOSS: India win the toss in the series-deciding third one-dayer at Cuttack, and skipper Virat Kohli opts to field.

India vs West Indies, LIVE Score, 3rd ODI at Cuttack: The first ball from Cottrell is slower one but down the leg-side so it's a wide. Jadeja plays and misses the next ball. The third ball results in a single. Cottrell goes for the bouncer but it's over the head and umpire calls it wide. The next one goes for a six and then Shardul smashes a boundary. Two singles to end the over. 15 runs from the over. India need 7 from 12 balls.

3rd ODI preview: India will have winning momentum on their side as they head into the third and final ODI against the West Indies in Cuttack on Sunday.

The West Indies took the home side by surprise in the opening ODI in Chennai to go one-up in the three-match series. But India, riding an all-round display, came back strongly to restore parity in the second match at Visakhapatnam.

Barring a rare duck from skipper Virat Kohli, the Indian top-order fired in unison at Visakhapatnam, before hat-trick hero Kuldeep Yadav sliced through the West Indies line-up for a comprehensive 107-run victory.

Rohi Sharma struck a blistering 159 while his opening partner KL Rahul also slammed a century. Then the duo of Shreyas Iyer and Rishabh Pant chipped in with quick-fire knocks, and they would like to end the year on a positive note.

The pitch at the Barabati Stadium is going to be similar to the one in Visakhapatnam, offering plenty of runs. India's fielding has not been up to the mark and they would certainly like to change that in the series-deciding ODI.

As far as the Indian squad is concerned, Delhi pacer Navdeep Saini is in line to make his ODI debut in the absence of the injured Deepak Chahar, who was ruled out of the match with a lower back problem.

Windies captain Kieron Pollard didn't hesitate in chasing after winning the toss in the first two ODIs but come Sunday, the teams will be thinking twice before bowling second keeping the dew factor in mind.

The West Indies, at the same time, will be keen to end a 13-year long wait to win against India in a bilateral ODI series. While the hosts, who lost to Australia 2-3 in their last bilateral series in March, will have their reputation at stake.