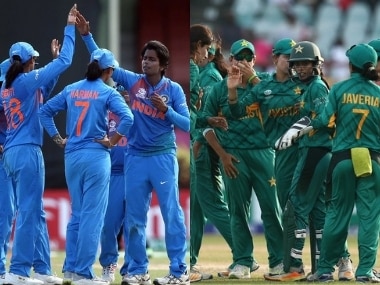 That's it for tonight from us as India beat their arch-rivals Pakistan by seven wickets. Pakistan scored a solid 134 but Mithali Raj's classy 56 has taken India a step closer to the semi-final spot . We will see you again on Thursday as India take on Ireland. For now, goodnight!

Harmanpreet Kaur: In shorter format, it's very important how you bowl and bat in first six overs and I think our bowlers did very well in first six overs. As Mithali is best against spinners we asked her to open the innings. We also wanted Veda Krishnamurthy to spend sometime in the middle. We are on the right track and we need to continue doing the good work.

Javeria Khan, Pakistan captain: We've been wokring really hard, the coach has been working hard to empower the players, giving us confidence and we're really glad they're here with us. We were told to play fearless cricket and despite losing wickets, we could still go for our shots and that's how they (Nida and Bismah) played. I'm sure both those girls will inspire the rest of the team to build more partnerships and hopefully get some results. I did have a chat (regarding the penalities). They told me that after warning the players three times, they gave the penalties. It's unprofessionalism on our part because it's not happened the first time that this has happened. It's happened in the Sri Lanka series as well, so we really need to look into it. The way our bowlers bowled, maybe they could have been better. After being penalised by 10 runs, we made them reach the 19th over and if we could have executed our plans better, we could have contained them better. Really happy with the girls and the coaches have said it's not the result that matters its the way we play that's how we inspire young girls. As long as the graph keeps going upwards I am happy, the results will eventually come and that's how we would get them to come forward and play cricket and keep us strong. I would want more girls particpating in sports be it cricket or any other.

Mithali Raj, Player of the Match: I enjoy opening the batting. I also like batting in the middle. At the end of the day, I enjoy batting. Chasing puts a little pressure, to keep up the run-rate, but that's is what I enjoy. There's no doubt that we will get to play the semis. But going forward we will need to be at our best as we will play the best teams.

Veda Kirshnamurthy finishes off the chase in the 19th over with a four to lead India to a seven-wicket win over their arch-rivals Pakistan.

Aliya Riaz back into attack.

Seven runs from the over and a wicket as India lose Mithali, who made 56. India need eight runs in last two overs.

Veda Krishnamurthy comes out to bat.

Harmanpreet Kaur: In shorter format, it's very important how you bowl and bat in first six overs and I think our bowlers did very well in first six overs. As Mithali is best against spinners we asked her to open the innings. We also wanted Veda Krishnamurthy to spend sometime in the middle. We are on the right track and we need to continue doing the good work.

Mithali Raj, Player of the Match: I enjoy opening the batting. I also like batting in the middle. At the end of the day, I enjoy batting. Chasing puts a little pressure, to keep up the run-rate, but that's is what I enjoy. There's no doubt that we will get to play the semis. But going forward we will need to be at our best as we will play the best teams.

Veda Kirshnamurthy finishes off the chase in the 19th over with a four to lead India to a seven-wicket win over their arch-rivals Pakistan.

OUT! Big wicket for Pakistan as they get rid of Mithali. The veteran wanted to lift over mid-wicket but didn't get the power as Nida Dar took a good catch in the deep.

FIFTY! Mithali comes down the track to score a boundary through mid-wicket and bring up her 16th T20I fifty

OUT! Nida Dar takes a sharp catch off her own bowling to get rid of Jemimah.

OUT! Mandhana falls to Maroof trying to pull her as Omaimah Sohail takes a good running catch at deep square leg.

OUT! Sana Mir doesn't disturb the scorers. Another stumping, Mir was way down the pitch, missed the leg-break. Couple of bounces before Bhatia could collect. There was no way Mir was coming back from there

OUT! Poonam tosses it wide of off and Riaz, who came down the track, waits and tries to cut it past point, the ball slips in under the bat and Bhatia dislodges the bails quickly.

OUT! Straight after the half-century. Dar is one her way. Tame shot to depart. Dar fetched it from outside the off side and flat bat to cover. Harmanpreet doesn't drop this.

FIFTY! Dar skips down the track and slog sweeps Hemalatha for a six. Sweet connection there. Mandhana took the catch in the deep, but couldn't balance herself in the field of play.  Comes in contact with the ropes before releasing the ball.

OUT! Veda takes the catch this time around. Maroof came down the track to a well flighted delivery and was looking to power it over mid-wicket, didn't get it from the middle, giving the fielder a regulation catch. End of an important innings.

After multiple warnings to the batters in the middle for running on the danger area of the pitch. The umpires have penalised Pakistan with 5 runs. It won't be taken off Pakistan's total but India will start at 5/0

FIFTY! Mahroof brings up a valuable half-century. Her first in T20I cricket and a memorable one. Dropped on the offside and runs a quick single.

OUT!  Another mix up. Another run out. Khan this time is on her way. She was more than halfway down the pitch after Mahroof had softly dabbed it to point. Radha Yadav throws the ball and Poonam Yadav whips the bails.

OUT! Bull's eye and Sohail is on her way! Omaima Sohail is definately short of her crease here. Pakistan lose their second wicket courtesy fablous pick up and throw from Jemimah Rodrigues. Just tapped on the offside and set off for a run.

DROPPED! Smriti Mandhana has fluffed an easy opportunity to send Javeria Khan back to the pavilion. The Pakistan captain didn't time the shot with the ball dipping on the mid on fielder. Mandhana gets low, gets two hands to the ball but isn't able to cling on.

OUT! India have an early breakthrough. Fine over from Reddy first up and she has been rewarded. Ayesha was under pressure to get off the mark, pushes for the delivery which was pretty much outside off stump and edges it to first slip.

Latest Update:Veda Kirshnamurthy finishes off the chase in the 19th over with a four to lead India to a seven-wicket win over their arch-rivals Pakistan.

Preview: After a near perfect beginning, the Indian women's team will be overwhelming favourites against arch-rivals Pakistan in its second Group B encounter of the ICC World T20 on Sunday.

Not considered among the top T20 teams in the world, India produced a power-packed performance, winning the opener against a formidable New Zealand side by 34 runs after skipper Harmanpreet Kaur's 51-ball 103. With momentum firmly on India's side, the 'Women In Blue' would like to set the record straight after losing to their arch-rivals in the 2016 edition at home.

However, since that loss in Delhi, India have played Pakistan thrice across two editions of Asia Cup, winning all the battles.

That Pakistan lost by a comprehensive 52-run margin to Australia in their lung opener will also give India an upperhand during Sunday's encounter.

The best aspect about India's performance against 'White Ferns' was young Jemimah Rodrigues's matured effort. With her skipper going for the jugular, 18-year-old Rodrigues just tapped for singles giving the senior player bulk of the strike. Yet, she managed to hit seven boundaries at a strike rate of 130 plus.

So much so that veteran Mithali Raj's services wasn't required during the Indian innings.

The Providence Stadium track proved to be helpful for the slow bowlers with India using as many as four of them in off-spinners Deepti Sharma and Dayalan Hemlatha, leg-spinner Poonam Yadav and left-arm orthodox Radha Yadav.

The spinners accounted for eight of the nine New Zealand wickets with lone seamer Arundhati Reddy picking the other scalp.

Against Pakistan, India might be tempted to use a second seamer in either Mansi Joshi or Pooja Vastrakar.

Not a single batter could cross the individual score of 30 with Bismah's 26 being the top scorer. The bowlers were also off the mark during the first eight overs when Beth Mooney and Alyssa Healey took them to the cleaners with a 72-run stand.

Sana's off-day (0/32 in 4 overs) was one of the factors for Pakistan not being able to contain Australia during the initial overs.

Come Sunday, they will have an onerous task at hand against the high on confidence Indian outfit.

Phew! What a chase! AB de Villiers arrived at the crease with 76 needed off 42 balls and he hit 55 of them from 22 balls with one four and six sixes. All through the innings the RCB batsmen were finding it difficult to get going. Paddikal struggled in the middle, Kohli could manage just one for and two sixes but then AB de Villiers batted on an altogether different wicket and pulled off a stunning win for RCB. That Unadkat 19th over which went for 25 runs was the turning point. May be Smith should have handed the penultimate over to Archer.

Jadeja, and not Dwayne Bravo’s bowling the final over, and he starts off with a wide. Dhawan then collects two off the first legal delivery as he guides the ball towards the leg side. Axar Patel, however, reminds every just how useful he is with the bat in hand as he smashes Jadeja out of the park, collecting three sixes off four deliveries — to finish the game by himself as Delhi Capitals collect their seventh win of the campaign with five wickets and a delivery to spare! For Chennai, they’re condemned to their sixth defeat in nine games, and by now the prospect of making it to the playoffs looks very difficult indeed for MS Dhoni and Co!

Delhi Capitals go on topWell, this has been a death bowling masterclass from both teams, but it is the Delhi Capitals who have won this. It was closer than the 13-run margin that the scorecard suggests. DC, by virtue of their sixth win in eight games, are at the top of the points table. DC will be mighty impressed with the extreme pace of Nortje who clocked 155 kmph quite easily and regularly. With Rabada, Ashwin and Axar rounding off their bowling, they look a really difficult team to beat. Shikhar Dhawan's 33-ball 57 was immensely vital as well as it set the platform for Shreyas Iyer, who scored a half century himself. There was no death-over flourish from either team this time though as bowlers came to the party. That's it from us tonight, but do join us for the coverage of RCB vs KXIP tomorrow. Till then, it's a wrap on Firstpost. Stay safe, good night.