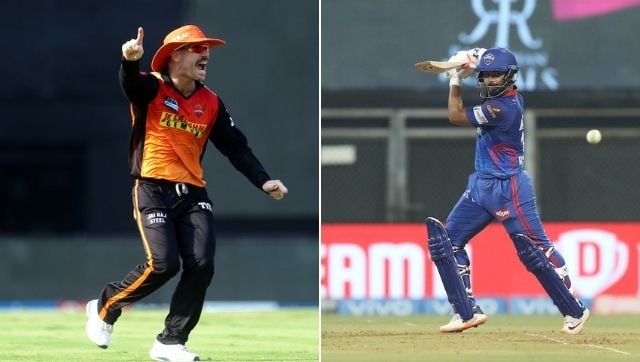 That's all we have for today. Hope you have enjoyed our coverage. We'll be back again tomorrow for the Punjab Kings vs Kolkata Knight Riders match. Take care and please be safe.

Prithvi Shaw is the Man of the Match:

David Warner: "It has been a tough one. The way our bowlers came back after the powerplay was fantastic. We knew on this surface if you got off to a flier it is always going to be tough in the middle, the bowlers executed well. Obviously Jonny at the top of the order and Kane taking it deep, we couldn't bat well in the middle overs. It depends on the selectors, it was a harsh call as per my opinion (On leaving out Manish Pandey). But at the end of the day it is a decision that they took."

If not for the one short from Warner, maybe the match would've gone to another Super Over. Rishabh Pant and Shikhar Dhawan kept their calm under pressure and ensured Delhi Capitals leave Chennai with two more points.

It's a tough loss to take for Sunrisers Hyderabad. Kane Williamson played a terrific knock and J Suchith's quickfire knock gave hope to their team. But their middle-order failed again on a challenging wicket and their bowlers gave 10-15 more runs on this track.

6th ball Dhawan misses his sweep but they take a single. There's a direct hit and third umpire is called again. Not SRH's day as Pant is safe. DELHI CAPITALS CLINCH VICTORY!

5th ball Pant misses his slog and they take a single. There's a big appeal for LBW. Umpire says no and SRH take the review. No bat involved. Ball tracking says wickets missing.

2nd ball A leg bye. But also one run for Delhi.

1st ball Pant gets the connection but it straight to the fielder at deep square leg. Just one.

6th ball Dhawan misses his sweep but they take a single. There's a direct hit and third umpire is called again. Not SRH's day as Pant is safe. DELHI CAPITALS CLINCH VICTORY!

Vijay Shankar plays on. The slower ball from Avesh Khan does the trick. Shankar b Avesh Khan 8(7)

Rashid with the reverse sweep but misses it. There's no question about this one. Umpire raises his finger. Axar on a hattrick. Rashid Khan lbw b Axar 0(1)

LBW appeal against Abhishek and the umpire says yes. The batsman takes the review. Ball tracking shows all three reds so Abhishek walks back to the dugout. Abhishek Sharma lbw b Axar 5(6)

Kedar Jadhav comes down the track but the ball spins and Rishabh has his stumping. Kedar Jadhav st Pant b Mishra 9(9)

Virat Singh's misery comes to an end. Short ball, the batsman goes for the pull but hits it straight to the fielder at mid-wicket. Virat Singh c Stoinis b Avesh Khan 4(14)

What have you done, Jonny?

Tries to beat the mid-on fielder but fails. Avesh Khan gets his revenge. Bairstow c Dhawan b Avesh Khan 38(18)

Blow for SRH. Bairstow and Warner are so good between the wickets but this time Warner fails to reach the line on time. Good throw from Rabada. Warner run out (Rabada/Pant) 6(8)

Brilliant over from Kaul. Hetmyer with the slog but fails to get the distance. Good catch from Kane Williamson. Hetmyer c Williamson b S Kaul 1(2)

Slower ball but it's short. Pant pulls hard but doesn't get the power behind it. A simple catch to fielder at deep square leg. Pant c J Suchith b S Kaul 37(27)

A missed stumping from Bairstow but Khaleel throws the ball towards the bowler's end and Shaw is way behind the line. Horrible for Delhi.  Prithvi Shaw run out (Khaleel Ahmed/J Suchith)

Who else but Rashid! Dhawan comes down the track but Rashid gives him no room. A slider from the leg-spinner as Dhawan is beaten and the stumps are disturbed. Dhawan b Rashid Khan 28(26)

IPL 2021, Live Cricket Score, Sunrisers Hyderabad (SRH) vs Delhi Capitals (DC): In the first Super Over of the season, Delhi Capitals chased down the 8 run target with Shikhar Dhawan and Rishabh Pant taking them over the line. Earlier, the two teams couldn't be separated with 159 runs from both.

Preview: SRH suffered three consecutive defeats before breaking their streak with a comfortable victory over Punjab Kings. In the four matches they played so far, Delhi have lost only once. In their previous game, impressive Delhi defeated the defending champions Mumbai Indians by six wickets.

This will be the last IPL match of the season in Chennai and the focus will again be on the nature of the track. The Chepauk wickets have lived up to their reputation of being sluggish and the chasing teams have an advantage. In the three previous matches, teams batting first failed to put on a 140 plus scores.

Warner's team has a few injury concerns in their camp. Pacer T Natarajan has been ruled out of the tournament due to a knee injury and Bhuvneshwar Kumar's thigh might rule him out for the game against Delhi. Warner and the team management will hope that they can buld on their winning momentum and overcome a tough side.

For Delhi, Shikhar Dhawan is showing great form. Leg-spinner Amit Mishra came into the side in their last game against Mumbai and picked four wickets for just 24 runs. Pant and head coach Ricky Ponting will once again bank on Mishra to deliver crucial blows on a slow and turning wicket. Ravichandran Ashwin will also hope to improve him form in helpful conditions.

"My style is to bowl the bowl in the air and get it to dip. I've been doing that for 14 years and I don't want to change much. I always go for the wickets," Mishra said after his player of the match performance against Mumbai.