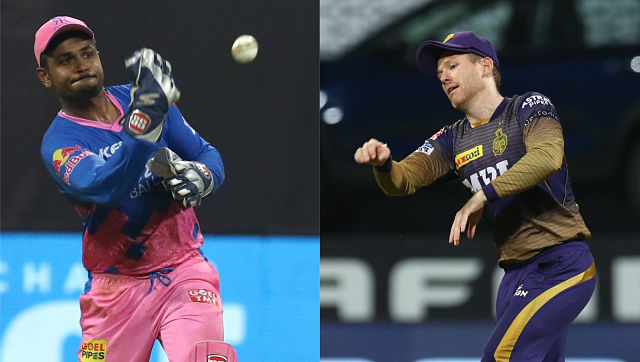 That's it from us tonight. RR have finally broken their losing streak. Quite clearly, they looked the hungrier side among the two. With ball, they were disciplined and with the bat, they were very calm and composed. What stood out was captain Samson stepping up. He wanted to bat deep and take the side home, anchored the innings beautifully. KKR, on the other hand, have a lot of talking and thinking to do. They played poor cricket throughout and lacked intent clearly.

Tomorrow we have a double-header. CSK play RCB in the 3.30 pm game followed by DC taking on SRH.

Chris Morris is Player of the Match

Morris: Just a clear mind. The mind gets cluttered when you get hit. Today was not the easy wicket to bat on. The plan is to keep nice and simple. Those guys are massibe losses, not just in the field but outside the field as well, But we have the right personell. We have to find the ways to lift ourselves. There is a lot of suffering going on, we have to keep people happy with our cricket. Conditions always change and it always gets difficult. We do a lot of analysing and experience of playing against Russell has helped.

Sanju Samson: The bowlers have been doing well in the last four-five matches, I enjoy captaining them. I don't come to bat with a mindset. I love to keep enjoying my batting, but nowadays I play according to a situation and try to win games for my team. He's (Sakariya) a very different kind of a person and chilled-out person. We will take one day off and sit down and plan for the next game.

Return of the prodigal!

KKR never in with a chance defending poor score unless they picked up 3-4 wickets in Powerplay. Wasn’t to be. Fine win for RR. Bowled & fielded brilliantly, chased target sensibly, sans fancy stuff. Super knock from Samson to anchor innings till the end. Return of the prodigal!

Well-deserved praise for Samson and Morris!

Such a matured and responsible innings from @IamSanjuSamson . Hope, captaincy is making him a better batter. But, Chris Morris 'FOUR' was the winning four. #KKRvsRR #RRvKKR

#KKR need one of their big players to control the innings from early on; I fear there is too much bottom loading.

Eoin Morgan, KKR captain: We lakced intent and impetus. We were under a lot of pressure from the word go, did not adapt to the wickets. The wicket today was not as good as it has been in the previous games. The clear in the mind the easier it is, that we have the ability in the side to play smart cricket. It was not there unfortunately.

Rajasthan Royals beat KKR by six wickets. Samson flicks Cummins for a single on leg side to hit the winning run. They collect two more important points and end their losing streak.

Krishna continues. Miller collects a fine boundary on the third ball of the over. A couple of singles and a double in the over as well. Eight off the over. RR now a maximum away from their second win in IPL 2021. They have 12 balls remaining.

FOUR! Lovely flick off the pads from Miller off Krishna, collects a boundary at deep mid-wicket

OUT! Poor shot from Tewatia, short ball and he is tempted to pull, ball hit the top edge and flies to Nagarkoti at long leg who completes a safe catch. Fourth wicket falls for RR. Rahul Tewatia c (sub)K Nagarkoti b Prasidh 5(8)

OUT! Third wicket for KKR finally, Chakravarthy produces the wicket, Dube goes after him, not really the length to play the pull, and he ended up hitting it high up in the air. Krishna completes a easy catch. Shivam Dube c Prasidh b Chakravarthy 22(18)

OUT! And Mavi strikes, removes Jaiswal, who once again was looking to clear the front leg and clear the ropes at sweeper cover but could not connect the ball properly and has bee held by Nagarkoti placed there. Jaiswal c (sub)K Nagarkoti b Shivam Mavi 22(17)

OUT! Chakravarthy straightaway avenges the boundary hit on the first ball of his spell, a quicker googly, Buttler completely misread the line and played it without moving his feet, caught right in front of stumps, umpire raised his finger with a doubt in mind. RR lose first wicket in chase. Buttler lbw b Chakravarthy 5(7)

Mavi was hoping to get a boundary with a scoop shot but helped the ball onto his own stumps. For wickets for Morris.

Hip-height short ball from Morris. Cummins pulls it to midwicket with a lot of power but it's flat and Parag takes another good catch in the deep.

Fuller delivery from Morris. DK plays a cracking cover drive, but uppishly and Sakariya times his jump brilliantly to take the catch at the edge of the circle.

No pyrotechnics from Russell today. Morris gets the big wicket. The delivery was pitched in the slot but Russell couldn't find the distance on his shot as Miller took the catch at long-on.

Mustafizur smartly bowls the slower offcutter. Tripathi attempts a wild slog and skies it to backward square leg where Parag takes a very good catch. It went very high and he had a lot of time to judge it.

Bizarre dismissal. Tripathi plays a straight drive which hits Morgan's bat and gets deflected to Morris. Tripathi calls for a single, Morgan responds, gets into a mix-up, and loses his wicket.

Jaiswal redeems himself with an excellent catch. It was a slower bouncer from Unadkat which Narine top-edged trying to play a pull shot. It went very high and Jaiswal had to cover quite a distance behind backward square leg but he was excellent in the execution of the catch.

Rana's slow stay at the crease comes to an end. RR pick up a wicket immediately after the break. Rana gets out caught behind. He was attempting a square cut but got beaten by the bounce.

Breakthrough for RR. Gill gets run out trying to take a tight single. Gill drops the ball at covers and sets off but Buttler is quicker than him and manages to make a direct hit. Gill was well short of the crease.

Preview: Rajasthan Royals (RR) and Kolkata Knight Riders (KKR) take on each other in Match 18 of IPL 2021.

A tough start of sorts for RR to the current season of sees the team level on 2 points with three other teams after four matches played, one of them being their opponents on Saturday, in KKR. However, Royals' Director of Cricket Kumar Sangakkara believes the team has the potential to bounce back and just needs to stitch a string of consistent performances.

Speaking ahead of Saturday's encounter at the Wankhede Stadium, the former Sri Lankan captain said, "We know we've had a tough start to the competition, but we could be in a completely different position had we won the opening encounter. The last two defeats have been a little hard to take, but we take the positives and keep the faith in ourselves. It's a long tournament and we certainly have the ability and the chance to turn this around tomorrow."

"What is more important for us is to make sure we've learned our lessons, and can focus on the basics. In my opinion, we just need to start the games well, whether it is with the ball or the bat, we need to make sure we're stamping our authority in the middle," Sangakkara added. Like the Royals, their opponents on Saturday also enter the match having lost their last two encounters, against CSK and RCB, and Sangakkara believes his team will have to play out of their skin to get back to winning ways. "We know KKR is a strong team, and they've got a good balance. Just like us, I am sure they are also eager to bounce back, so it will be a tough challenge, and we will need to make sure we are executing all three facets of our game well in order to win," expressed Sangakkara.

Last season in the UAE, the team from Kolkata managed to register two wins against the Royals, defending their totals on both the occasions, which should serve as added motivation for the inaugural winners of the IPL. "We have had the chance to sit together and make plans for the match tomorrow. We know KKR handed us two losses last season, and I believe these are the kind of matches we need to win if we want to make it to the playoffs," Sangakkara signed off.

KKR won their their first game against Sunrisers Hyderabad (SRH) and from then they have lost three consecutive matches, the last one against CSK being the closest they got to the victory mark. Eoin Morgan and Co can take confidence from the fight that the middle-order showed in the chase against Super Kings and would be hoping that they turn things around for themselves against RR.

With inputs from Rajasthan Royals media

Independence Day LIVE: We need to be proud of diversity in our country, says PM Modi