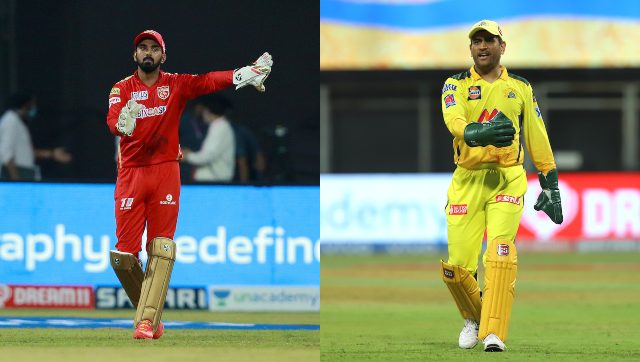 That's it from us here. Hope you enjoyed the coverage of CSK vs PBKS. Do join us for MI vs SRH tomorrow evening, until then, good night and good bye

MS Dhoni: Makes me feel very old (On his 200th appearance for CSK). It has been a very interesting journey. It started in 2008  when we played in South Africa, Dubai, and back home. Never thought Mumbai would be our home. 2011 was the last time we were very happy with the Chennai wicket. Before that, there was spin, but it also helped fast bowlers. After the wicket was relaid, we found it slightly difficult to adjust to the wicket there. This is a good wicket, there was not a lot of dew so the ball kept swinging. It wasn't a lot of swing but the ball kept doing off the seam after the first 6-7 deliveries. If you are looking to attack and there is help in the wicket I would prefer him to bowl the first four overs straight up and finish his quota. Bravo can bowl at the death. We felt if Moeen bats slightly up the order we are making good use of our resources. It's important to use the resources to the fullest.

Deepak Chahar: I enjoyed Mayank's wicket the most, a dream ball for a bowler to swing and hit top of off stump. Hopefully, I can deliver in more matches. As a bowler, my plan is to bowl dots if I don't take wickets. Then the bowlers from the other end will also be able to take wickets.

Deepak Chahar is the Player of the Match for his excellent bowling figures of 4/13.

KL Rahul: Not much to say. If any team loses five wickets in the first seven or eight overs, it's always going to be catch up. They bowled well, we played some bad shots. It (pitch) was a lot more sticky than what it looked like. Credit to the CSK bowlers. It's good learning for us. We have pace in our attack, we want to use that. The first game didn't go too well for those two (Richardson and  Meredith), it was their first game and I am sure they were a bit nervous. It can be tough and cruel. Their plans were clear, they did execute it pretty well. It was good to see that they came back stronger this game. We would like to review ourselves.

CSK off the mark on the points table

A brilliant win for CSK. It was a tricky pitch and CSK's bowlers set the match up by restricting PBKS to 106/8. Deepak Chahar set the tone with four wickets through brilliant seam and swing bowling. And then the rest of the bowlers chipped in with wickets to maintain the pressure.

CSK struggled early on in the chase but Moeen and du Plessis released the pressure with some fabulous stroke play. They did lose a couple of wickets at the end but the job was done by then.

FOUR! That's it! CSK win by 6 wickets! Curran finishes it off in style. It's short down the leg side from Meredith, Curran swivels and pulls it over square leg for four.

That short ball strategy worked in that over from Shami. He darted the first one short and Raina miscued his pull in no man's land. Shami had his man off the next ball though with another short one. He then made it 2 in 2 with the wicket of Rayudu, who for some unfathomable reasons, went for a wild shot off the first ball. The hat-trick ball was full on off, Du Plessis calmly drove it to long on for a single. Another two singles off the last two balls made it 5 runs and two wickets off it. CSK need just 5 off 30 balls now.

Deepak Chahar is the Player of the Match for his excellent bowling figures of 4/13.

FOUR! That's it! CSK win by 6 wickets! Curran finishes it off in style. It's short down the leg side from Meredith, Curran swivels and pulls it over square leg for four.

OUT! 2 in 2! What's happening? Rayudu charges down the track first ball, Shami darts it in short, Rayudu looks to slash but ends up miscuing it high in the air, Pooran settles under it and takes the catch.

OUT! Moeen departs, but he's done his job. It's another googly outside off, Moeen gets down for another swipe but ends up hitting it straight into the hands of the deep mid-wicket fielder. A very good innings under pressure.

OUT! Ruturaj's struggle ends. Short outside off, Ruturaj Stays back and looks to pull but it gets big on him and he ends up mistiming it straight to Deepak Hooda at deep mid-wicket.

OUT! A very good innings from Shahrukh ends. Good stuff from Curran!

It's a slower bouncer outside off, Shahrukh looks to pull it powerfully but gets but ends up mistiming it to deep mid-wicket where Jadeja charges forward and takes a good catch.

OUT! Bravo Strikes! M Ashwin departs. Another one bites the dust.

Shardul still struggling to get his lines and lengths right. He bowls one wide to start off and Shahrukh slaps it over cover for a couple. And then pulls the next one over mid-wicket for a four. Shardul still concentrated on bowling it short. This time though to good effect and pushing them a little slower to concede just two runs off the next four deliveries. 8 runs off the over.

What a poor shot. It's a back of a length delivery outside off, spins back in. Richardson stays in his crease and looks to pull. But is done in by the spin and may be the pace of the ball which was a bit quicker. He missed it and the ball disturbed the furniture.

OUT! PBKS are 26/5. Deepak Chahar gets his fourth!

It's a touch full and outside off, it seams away. Hooda goes for a drive but ends up hitting it uppishly and straight to mid off. It seemed like the ball stopped on him and he checked his shot at the last moment. Nevertheless, what a decision by Dhoni to give him the fourth over on the trot.

Jhye Richardson is the new batsman.

OUT! Chahar gets 2nd in the over. His third overall. Pooran departs for a duck

It's a short one outside off, Pooran goes for a pull. It's a half-hearted one as he takes his eyes off the ball. He was expecting it to rise a bit higher but he ends up hitting it straight to Shardul Thakur at fine leg. What a start this is for CSK.

OUT! It's that man Jadeja again. A brilliant catch this time, to dismiss Chris Gayle.

Chahar has his second wicket. And it's another big one. He sets off in celebrations. He completely outfoxed Gayle there. It's a slower one outside off, the knuckle ballGayle isn't expecting a slower one. He is early into his shot and ends up chipping it to point, where Jadeja dives low to his right and pouches it inches above the ground.

OUT! Sir Ravindra Jadeja has struck. What a brilliant piece of fielding to run KL Rahul out!

This is a HUGE wicket! Jadeja wields his magic wand. It's swings in late from Chahar, Gayle misses his flick and the ball trickles to the off side off his pads. They decide to run through for a risky single. Jadeja hares in from point and whips in the throw to knock down the stumps with one stump to aim at. Replays show Rahul is just short. That power in the throw did the trick. What a fielding effort.

It's wide outside off, Gayle smashes it powerfully straight to point where Ruturaj Gaikwad puts it down. What a let off. Could have been two wickets in the first over.

OUT! What a brilliant delivery from Chahar! Castles Mayank Agarway!

Wow! What a ball. It's that outswinger on middle and leg, swings away late and seams off the surface. Mayank stays rooted to the crease and looks to play it to the leg side. He's actually squared up by the movement and late into his shot. The ball whizzes past the outside edge and hits the timber. Mayank departs for a two-ball duck.

Toss: MS Dhoni has won the toss and elected to bowl.

CSK will bowl first against PBKS. MS Dhoni informs that they have gone unchanged.

Dhoni reckons that the pitch looks a bit tacky, and there is a bit of grass as well. In the second innings , the first 3-4 overs will be crucial as the ball will do a bit.

Rahul says that they would look to follow the template from the last game and also informs that they too have gone unchanged.

IPL 2021, Live Cricket Score, Punjab Kings (PBKS) vs Chennai Super Kings (CSK): Good contest that between Moeen and Shami. Shami bowls a bouncer first up and it whizzes past Moeen's gloves. Shami drops it short again the next ball but this time, Moeen gets in position early and pulls it over mid-wicket. After a defence, Moeen flicks a full delivery through mid-wicket for a couple. Shami then comes up with a yorker on middle and Moeen digs it out safely. Shami overpitches the last one and Moeen drives it through extra cover. 10 runs off the over.

Preview: Punjab Kings provided plenty of entertainment in IPL 2020, and there was no dearth of thrill in their 2021 season opener.

Opening the campaign against Rajasthan Royals, PBKS batted first and posted an imposing total of 221 with skipper KL Rahul playing a blistering knock of 91 off 50 and Deepak Hooda setting the stage on fire with a 28-ball 64 innings.

After some batting extraordinaire, PBKS were pretty ordinary with their fielding and bowling as Sanju Samson struck a brilliant century to take RR close to the victory only for Arshdeep Singh to deny him by successfully defending 13 runs in the last over.

Against Chennai Super Kings, Rahul and Co will hope for a lesser entertaining and more commanding performance. The Wankhede Stadium had been a batting paradise but things were made difficult for PBKS by their overseas pacers — Jhye Richardson and Riley Meredith  — who were guilty of bowling too many loose deliveries. PBKS need to improve their bowling and fielding to compliment a batting line-up that is good enough to beat any team.

On the other hand, Chennai Super Kings lost their first match against Delhi Capitals by seven wickets. CSK did well batting first as they posted a total of 188 with the comeback man Suresh Raina scoring a breezy fifty. But their bowling lacked the punch as DC easily chased down the target inside 19 overs.

CSK looked short of bowlers who could impose themselves on the opposition and their openers also failed to fire against DC. Some valuable runs from top-order could have helped CSK reached 200 on a batting-friendly Wankhede strip.

On Friday, both teams will enter the field with different motivations. PBKS, who have never won the IPL, will want to stretch the winning run against CSK, one of the most successful sides in the history of the tournament and we are guaranteed great entertainment.