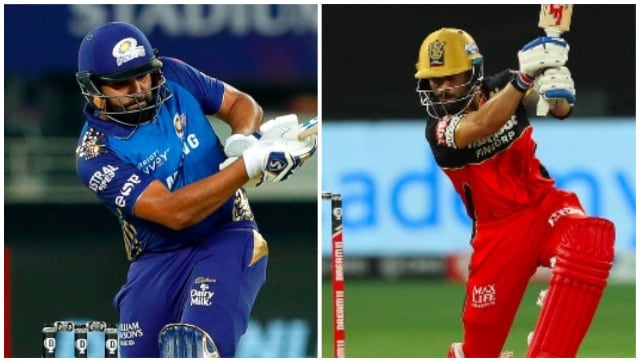 That's all for tonight. Hope you have enjoyed our coverage. We'll be back again tomorrow for the second match of the season – Chennai Super Kings vs Delhi Capitals.

Harshal Patel: When they traded me, they told me I was going to be an important part of the team, and my role would be to bowl in the death. Absolutely happy to be here, and the kind of the faith they have showed in me. I was just focussed on my execution, and the most important thing was to make the most of the momentum. First five-wicket haul in 98 T20 games, and coming against a team like Mumbai Indians, it is definitely special. I’ve just been working on my yorker, and I feel confident bowling at different stages of the game. Want to be a bowler who takes more responsibility.

Harshal Patel is the Man of the Match for his 5/27!

Virat Kohli: "It was important to play against the strongest side in the competition and test our side. Everyone was involved in this game. To be honest, the pitch was decent in the first half. You have to be smart with picking the gaps and running hard. Playing in Chennai you have to be respectful of that. We used the conditions well. Harshal is relishing the role. He is going to be our designated death bowler. Very confident about what he wants to bring to the table and as a captain you want someone with that clarity."

RCB winning on the last ball while chasing in IPL:

Rohit Sharma, Mumbai Indians captain: Winning the championship is important. I thought it was a great fight towards the end. Score was something we were not happy with to begin with. The kind of start we got in the first half of our innings. First game we made some mistakes, and we need to move on quickly from those mistakes. (On Jansen) He’s definitely a talent and can bowl at whatever situation. (Death overs plan) They had AB de Villiers and Christian, and we wanted to get them out, which is why we went with Bumrah and Boult. I thought we played really well, given the situation. De Villiers played really well towards the backend, got them home. Few new faces in the squad, and lot of the guys are coming from playing international cricket, so we haven’t had much time to prepare as a group. Given how the IPL is played over the years, that’s how it is. You’ve just got to get into the game as quickly as possible. First game, we’ve got some work to do. It can be difficult, specially for the teams who have a great home record. But that’s the challenge of the sport. It is something that is missing. We’re fortunate enough on the park to play cricket, that is what is more important. It’s important we give them something to look forward to.

No doubt AB de Villiers and Harshal Patel were the standout players. The likes of Virat Kohli and Glenn Maxwell also played their parts. It's just the opening match and Mumbai have won titles after losing the first match so they won't worry much. A little bit more effort form batsmen could've been very useful for Mumbai today. But they will learn from their mistakes.

The jinx goes on!

Mumbai Indians have now lost each of their last nine season-openers in IPL.

One run needed from one ball and Harshal Patel does well to play the yorker from Jansen to short fine-leg and take the single. Mumbai Indians lose yet another opening game. ABD's knock proved to the difference!

Oh ABD is walking back to the pavilion!

Good throw by Krunal Pandya from the deep and ABD, despite the dive, is short. RCB need two from two balls. AB de Villiers run out (Krunal Pandya/Ishan Kishan) 48(27)

Harshal Patel is the Man of the Match for his 5/27!

The jinx goes on!

Mumbai Indians have now lost each of their last nine season-openers in IPL.

One run needed from one ball and Harshal Patel does well to play the yorker from Jansen to short fine-leg and take the single. Mumbai Indians lose yet another opening game. ABD's knock proved to the difference!

Oh ABD is walking back to the pavilion!

Good throw by Krunal Pandya from the deep and ABD, despite the dive, is short. RCB need two from two balls. AB de Villiers run out (Krunal Pandya/Ishan Kishan) 48(27)

Bumrah stops the ball with his leg and Jamieson is well short of his crease. Jamieson run out (Bumrah) 4(4).

Another one bits the dust! Shahbaz goes for the slog against a back of a length ball from Jansen. He can't beat the deep square fielder. Shahbaz Ahmed c Krunal Pandya b Marco Jansen 1(2)

Another wicket for Mumbai!

Maxwell walks back to the pavilion and it's Jansen who gets rid of the danger man. Maxwell c Chris Lynn b Marco Jansen 39(28)

Bumrah's back and he breaks the partnership. It's the big wicket of Virat Kohli. Kohli lbw b Bumrah 33(29)

The knuckle ball does the trick for Boult. Patidar goes for the cut but drags it on to the stumps. Rajat Patidar b Boult 8(8)

Krunal Pandya strikes! A bad shot from Sundar as he gets a top edge straight to Lynn at short third man. Washington Sundar c Chris Lynn b Krunal Pandya 10(16)

OUT! A run out off the last ball of the Mumbai innings, with four wickets falling in the over, as Rahul Chahar is run out while pushing for a second run with Bumrah firmly standing at the non-striker's end.

OUT! Five-for for Harshal Patel, and what a final over this is turning out to be for the seamer! Marco Jansen misses the yorker, and sees his off stump get uprooted. MI 158/8

OUT! What a spell this is turning out to be from Harshal, as he gets rid of the dangerous Pollard with some clever change of pace, the batsman holing out to Sundar at deep square leg! What's more, he's on a hat-trick! MI 158/7

OUT! Dan Christian brings the series of drops to an end as he holds on to the relatively easy chance to get rid of Krunal for 7, and give Harshal his third wicket of the evening. Krunal tries awkwardly whipping the back-of-length delivery, and doesn't get the connection to clear the fence .MI 158/6

OUT! Patel decides to take matters into his own hands and not rely on his teammates for the dismissal, trapping Kishan LBW with a well-directed yorker that pitches just in line and hits him on his left foot, HawkEye later showing the ball to be hitting the off stump in its path. Umpire Menon had originally ruled it not out, and for once has to overturn his decision. MI 145/5

OUT! Harshal gets some respite after getting tonked for a few boundaries as he traps the dangerous Hardik Pandya LBW before he cause any further damage in the death overs. Traps him LBW with a full toss to which umpire Nitin Menon raises his fingers right away. Hardik reviews, and gets three reds in return. The umpire signals for the second timeout after the dismissal. MI 135/4

OUT! Outstanding catch by Washi off his own bowling to deny Lynn a fifty on debut! The Aussie tries to heave the ball towards the leg side, but ends up getting a thick leading edge, which still needed a superlative effort from the bowler as he had to dash all the way to mid on in quick time. MI 105/3

OUT! Jamieson breaks the partnership that was starting to look real dangerous! SKY's looking to cut a short ball from Jamieson, but ends up getting an audible nick that results in a simple catch for keeper ABD. MI 94/2

FOUR! Surya opens the face of his bat for a late cut towards third man, deftly picking the gap and bringing up the fifty partnership — which has taken a total of just 28 deliveries — with Lynn! MI 75/1

OUT! Royal Challengers Bangalore get the early breakthrough that they were looking for, and it's Rohit Sharma who has to walk back after getting off to a good start. Ran almost halfway down the pitch from the non-striker's, only to get sent back last min by Lynn. MI 24/1

Preview: Cricket chiefs have stepped up surveillance of star players ahead of Friday's launch of the Indian Premier League amid a rapid surge in coronavirus cases.

All eight teams are in strict bio-bubbles and testing has been increased as case numbers have skyrocketed to more than 130,000 a day since players arrived to prepare for the eight-week spectacle.

The Board of Control for Cricket in India (BCCI) has appointed bubble integrity managers to police each team.

The games are to be held in six cities and all players are also being monitored through tracking devices, team officials said. Others have withdrawn because of pandemic fears.

Josh Hazlewood pulled out of the tournament this month after spending 10 months in a bubble, becoming the third Australian player after Mitchell Marsh and Josh Philippe to withdraw.

Mumbai Indians talent scout and former India wicketkeeper Kiran More is one of the 36 people associated with the IPL including players, support staff, ground staff and broadcast crew to test Covid positive ahead of the current season.

Bangalore batsman Devdutt Padikkal and Kolkata Knight Riders' Nitish Rana have joined their teams after recovering from Covid but Patel and Sams are still in isolation.

Sourav Ganguly, president of the BCCI, has said he expected the disruption to ease once the tournament starts.

But the BCCI has stopped independent media from covering the games though it has said the decision will be reviewed after a few days.

The 14th edition of the cash-rich event is being seen as a dry run for India as hosts of the T20 World Cup in October and November.

Ganguly expressed confidence in India hosting "the best-ever ICC T20 World Cup" in a letter to state associations, adding that he hoped "normalcy" will return soon.

The decision to retire one more squadron of MiG-21 Bison aircraft by September end comes a day after a MiG-21 Type 69 aircraft crashed in Rajasthan's Barmer, killing both pilots