Mumbai Indians defeat Kolkata Knight Riders by 13 runs and continue to survive in the tournament. Karthik collects a single off the final ball. Only nine come in the final over.

So that's it from us in our coverage of the first game of the Sunday double-header, with Mumbai Indians pulling off a thrilling 13-run win over Kolkata Knight Riders to notch up their fourth win of the season, and keep their campaign alive in style. The defending champions should draw confidence from this victory as the plot their course ahead in what is still a very challenging path to the playoffs.

We're unable to provide you with the Man of the Match as well as the quotes from the post-match presentation, which has been skipped entirely by the broadcasters as they cut to the second game of the evening — in which Kings XI Punjab take on Rajasthan Royals at Indore, the live updates of which you can follow here.

Most consecutive wins against a team in IPL:

That was some turnaround by Mumbai Indians. At one stage, when Robin Uthappa was batting, it looked game over for Mumbai but their bowlers kept them in the game. Hardik Pandya bowled a brilliant spell. Jasprit Bumrah too stood out when his team needed him to bowl those last few over. A confidence-boosting victory for Rohit Sharma's men.

Krunal Pandya certainly kept his calm in the last over of the KKR innings, going against a proven match-winner in Dinesh Karthik, and prevailed 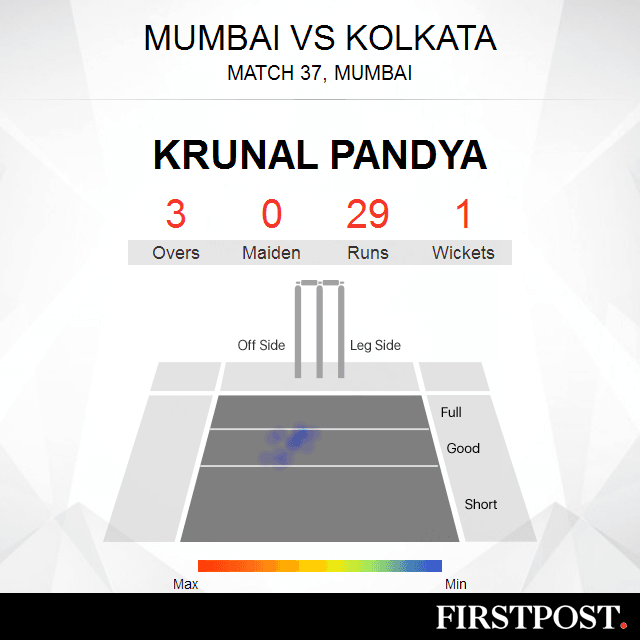 STAT ATTACK: This is KKR's fifth consecutive loss at Wankhede against Mumbai Indians in IPL.

Too much for KKR in the end. Dinesh Karthik this time could not cross the hurdle for his team. Too many dot balls in the middle overs after the departure of Robin Uthappa, and one must admit that very disciplined bowling from Mumbai Indians as well.. KKR are not yet out of the tournament but things are a little difficult for them now. Let's see if they can avenge this in the return game. 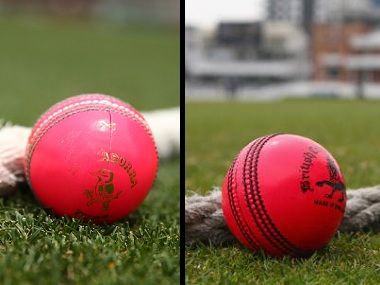 Mumbai Indians defeat Kolkata Knight Riders by 13 runs and continue to survive in the tournament.  Karthik collects a single off the final ball. Only nine come in the final over.

Ball five: Karthik hits this towards the leg side but refuses a single. 15 off 1.

Ball 4: A low full toss and Dinesh Karthik slices it over the point fielder for a boundary. 15 off 2.

Ball 3: Krunal Pandya tosses it around middle and leg, Dinesh Karthik kneels and tries to sweep. Misses and gets rapped on the pads. Mumbai appeal but it was going down the leg side. 19 off 3.

Mumbai Indians defeat Kolkata Knight Riders by 13 runs and continue to survive in the tournament.  Karthik collects a single off the final ball. Only nine come in the final over.

OUT! HUGE wicket. Jasprit Bumrah bangs it short and Andre Russell tries to pull it. But was early into the shot and top edges it. And Krunal Pandya takes a superb running catch.

OUT! Hardik Pandya strikes once again. He bowls a bumper and Nitish Rana top edges it. Bumrah gets underneath it at deep midwicket and pouches it.

OUT! Mayank Markande gets his man albeit 50 runs later. Mumbai Indians finally get rid of Robin Uthappa, who holes out to Ben Cutting at long off.

OUT! Hardik Pandya strikes on his first ball. Starts with a slower delivery and Gill tries to power it long off but skies it. The senior Pandya gets underneath it at mid off and gobbles it up. KKR have lost both their openers.

OUT! A similar delivery but Narine gets the desired result as Krunal Pandya holes out to Shubman Gill at long on.

OUT! Andre Russell collects his second wicket. Suryakumar Yadav, who was struggling due to the hat, edges one to Karthik. He departs for 59.

OUT! Huge wicket. Sunil Narine loops it up, Rohit's eyes lit up and he tries to slog it over midwicket. Gets the elevation but not the distance and holes out to Rinku Singh, who was stationed at that position.

FIFTY! Mr Consistent! Yet another fifty for Suryakumar Yadav. Gets to the milestone with a single through midwicket.

OUT! Andre Russell provides the breakthrough. Bowls the slower ball and Lewis mistimes a slog. Gets caught by Chris Lynn at short fine leg.

The 50-run stand is up between Suryakumar and Lewis. Chawla slips out a googly and Lewis sends it over cover for a boundary.

Kolkata Knight Riders have won the toss and Dinesh Karthik opts to bowl.

Preview: Looking, at last, like a team wanting to defend its title, Mumbai Indians' road to redemption in the Indian Premier League faces another tricky test, as they host a formidable Kolkata Knight Riders on Sunday.

The defending champions seemed resurgent after a tense win over Kings XI Punjab, though their play-off hopes were still hanging by a thread, thanks to a spate of reverses over the past few weeks. The 21-ball 56-run blitzkrieg between Krunal Pandya and Rohit Sharma in Indore is history and MI will next need to tame KKR, who have a reputation of being fierce opponents, at the Wankhade Stadium.

MI's under-performing batsmen finally clicked against Kings XI and will look to replicate their performance against another top of the table outfit.

Mumbai jumped to the fifth spot having won three of their nine games while KKR are sitting comfortable in the third position. The hosts have to win all their remaining five games to make it to the play-offs.

For Mumbai Indians, Suryakumar Yadav (340 runs) has been in great form and has scored runs consistently.

But his opening partner, Evin Lewis, has been a disappointment and the home team will need to relook at its opening pair, especially after the West Indian's flop show at the Holkar International Stadium.

The hosts, however, will be pleased that skipper Rohit is back among the runs and will be looking up to him to lead them from the front.

Wicketkeeper Ishan Kishan, J P Duminy, Hardik Pandya and his brother Krunal, who played a splendid cameo against Kings XI, along with yesterday's Man of the Match Yadav and Sharma, make up a formidable batting line-up.

Out-of-form West Indian Kieron Pollard is expected to be benched again in favour of Ben Cutting.

An area where MI need to improve is their bowling in the death overs. While New Zealander Mitchell McLenaghan was hammered for three sixes in the final over by the Royal Challengers Bangalore batsmen, Hardik leaked over 20 runs in the final over against KXIP.

Jasprit Bumrah, Cutting and young leggie Mayank Markande (12 wickets) need to play their part to perfection if KKR's strong batting line-up is to be restricted. Krunal, too, needs to chip in with the ball along with Hardik.

Significantly, MI have won only one of their four home games, against RCB, this season.

It is a different story for KKR with skipper Dinesh Karthik leading the charge in style. Following an emphatic six-wicket win over Chennai Super Kings, KKR have jumped to the third spot and a third win on the trot will boost their qualifying hopes considerably.

Karthik has amassed 280 runs in nine matches but is still outside the top-10 list of leading run-getters and he's followed by Chris Lynn and Andre Russell, with 260 and 207 runs respectively, to their credit so far this season.

The firepower of Sunil Narine at the top and the emergence of youngster Shubhman Gill down the order provide KKR with one of the most devastating batting orders. Only vice captain Robin Uthappa has not played to potential.

KKR also boast of three quality spinners — Narine (10 wickets), Piyush Chawla (8 wickets) and Chinaman bowler Kuldeep Yadav (8 wickets). And if Nitish Rana, who was suffering from a back spasm, is back, it will add more variety to their attack.