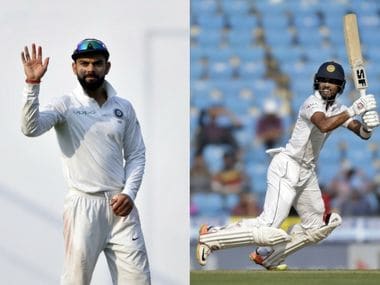 If you are an Indian fan it is an extremely happy picture to see India finish 100 runs ahead with a rampaging Kohli and sedate Pujara walk off the field. But, if you are Sri Lanka fan then the horrors of the Test series in Lanka might have resurfaced.

Day 2 completely belonged to India with the home team taking a comfortable 107-run lead with eight wickets in the bank.

Have a fun Saturday night and hope to see you tomorrow for a lazy Sunday. Thank you for joining us, we will be here for Day 3, tune into our coverage at 8 AM onwards. Ciao.

One has batted the whole day. The other for only 1 hour or so. But both have impacted the innings. Pujara did frustrate the Lankan bowlers but India would’ve been slightly disappointed had the lead been under 100 runs. Kohli ensured that that doesn’t happen with a brisk half century. It was a day of cricket Sri Lanka would like to forget as soon as possible. It was Indian domination throughout the 90 overs. 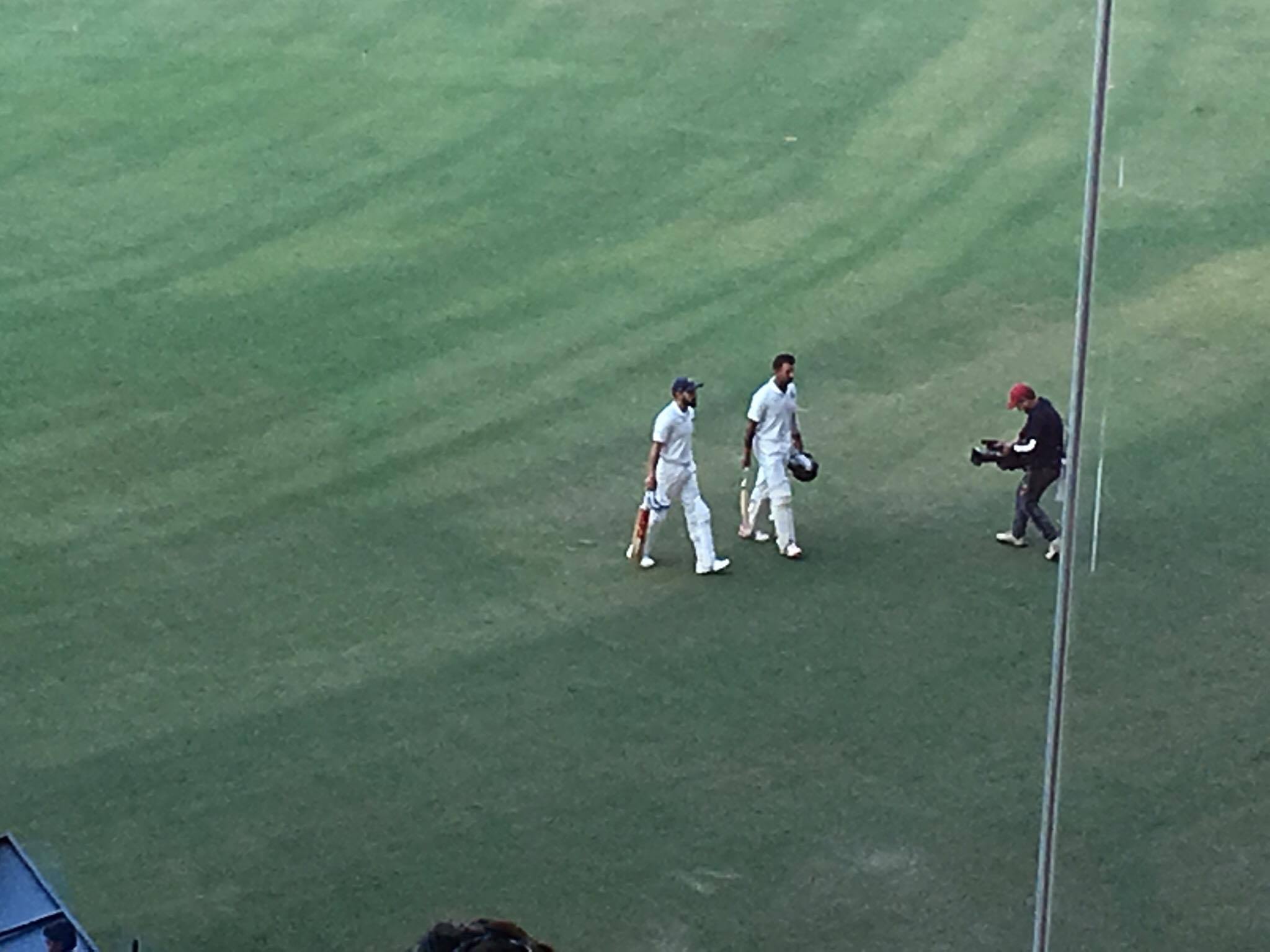 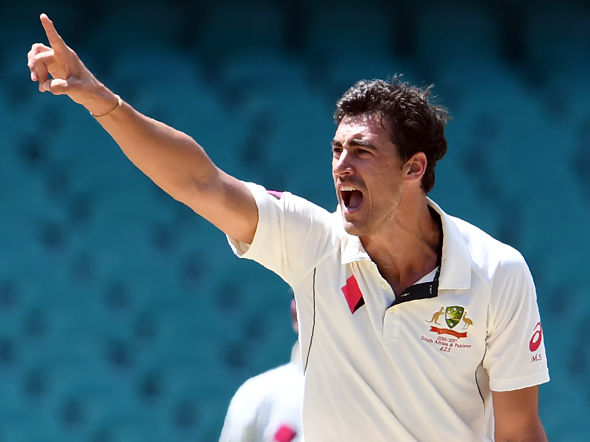 India made sure that they will not bat again most probably in this Test. Sri Lankan bowlers lacked planning particularly Dilruwan Perera while Vijay made a century on his return and augmented Indian skipper's quandaries, Pujara played like Pujara and scored another ton. And Virat Kohli is also looking good for another ton here.

Pujara collects a single off the second delivery of the final over of Day 2, guiding it towards the off side. Kohli rolls his wrists off the fifth delivery, placing it wide of short midwicket to collect his sixth boundary. Blocks the last ball, as India finish the day on a score of 312/2, with a lead of 107.

FOUR! Flicked away wide of short midwicket by the Indian captain, finding an easy boundary in the process! India 312/2

Dilruwan Perera to bowl the final over of the second day.

Raised his bat half heartedly, more so because he wanted to acknowledge the crowd. He is hungry for more. He wants more. Kohli’s 15th Test fifty! 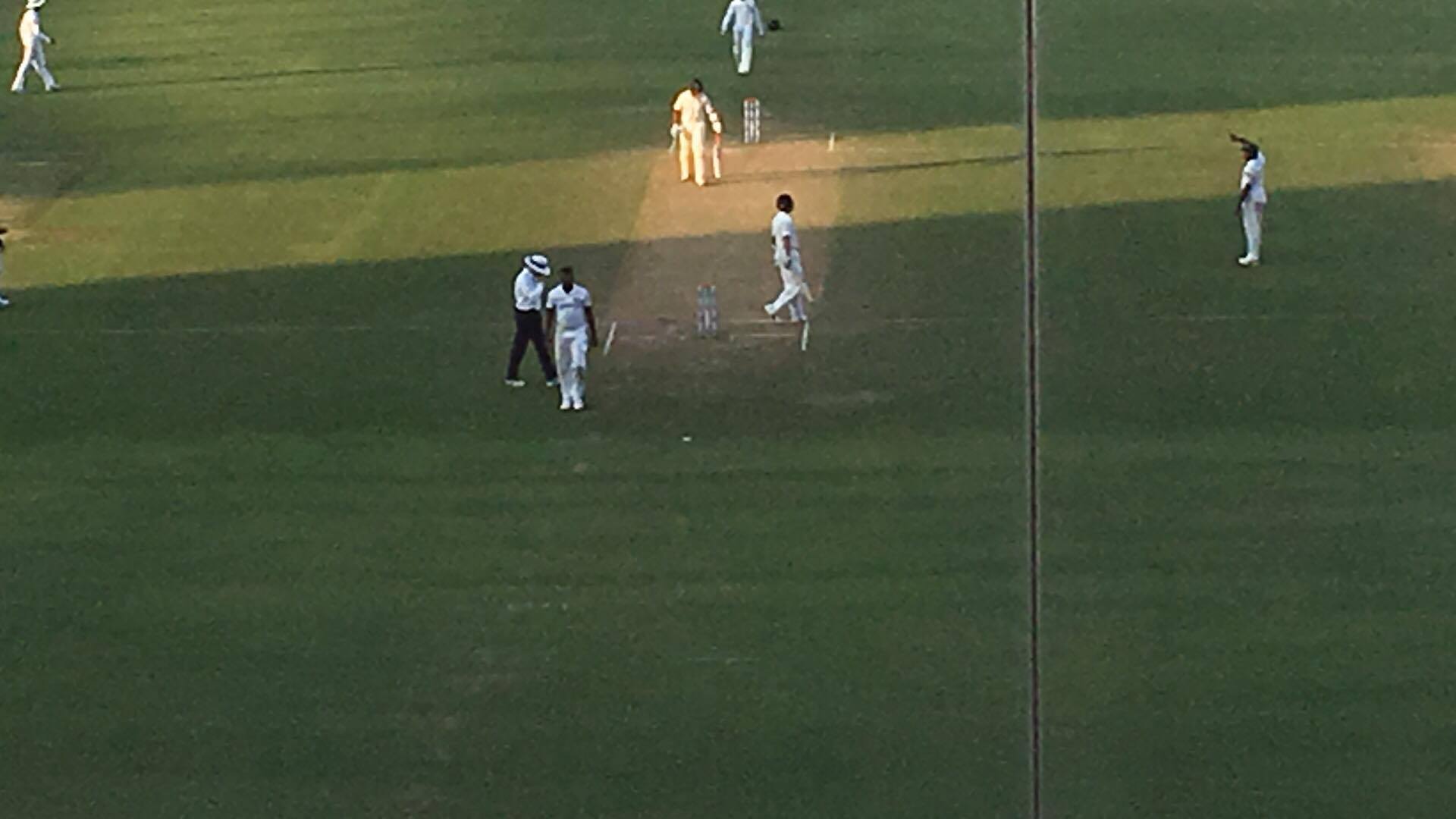 Kohli collects a single off the second delivery of the 97th over, bringing up a fine half-century in the process. Has been scoring at a decent pace so far (75 in the 97th over), collecting five boundaries off 66 deliveries to get to the milestone for the 15th time in his Test career (with 18 tons). India's lead is also over the 100-run mark now.

FIFTY for Virat Kohli — his 15th in Test cricket! Collects a single off the second ball of the 97th over, taking 66 deliveries get to the mark! Like Pujara, he too extends his fluent run in the series! India 306/2

50-partnership up between Pujara and Kohli for the third wicket, with the former responding to his skipper's call for a bye after getting beaten by a slower ball from Lakmal. India 266/2

Century number 14 it is for Cheteshwar Pujara! What a series he is having so far! Gets to the magical three-figure mark with a double, consuming 246 deliveries to reach there. Has been a composed innings from the Saurashtra batsman, having batted for several hours so far in the innings! He exchanges a hug with his skipper after bringing up the milestone.

OUT! And the Sri Lankans finally get a wicket on the second day! Herath fires a full toss outside leg, and Vijay sweeps it straight into the hands of short fine leg, departing after an outstanding comeback knock. India 216/2

FOUR! Vijay whips one away towards the midwicket fence off Herath to bring up the 200-stand with Pujara for the second wicket! The pair have taken 417 deliveries to bring up the milestone! India 210/1

CENTURY NUMBER 10 for Murali Vijay! Gets there with a quick single in the 61st over. A brilliant knock for the 33-year-old by any standard, and a timely one for him as well as he looks to seal the opener's slot for himself ahead of the important overseas tours! Takes 187 balls to get to the milestone, with nine boundaries and a six! India 170/1

150-partnership up between Vijay and Pujara, with the former guiding the ball towards midwicket and coming back for a second to bring up the milestone. The pair have taken 321 deliveries so far in the stand. India 157/1

100-partnership up between Vijay and Pujara off 260 deliveries, with Vijay cutting the ball towards backward point, and coming back for a third after the fielder giving the ball a chase pulls it back inside the playing area. The old partners-in-crime are back at it again! India 107/1

FOUR! And that's a half-century for Murali Vijay — his 16th in Tests! Takes 112 deliveries to reach the milestone, bringing it up with a boundary off a straight drive! India 86/1

FOUR! And that's a half-century for Murali Vijay — his 16th in Tests! Takes 112 deliveries to reach the milestone, bringing it up with a boundary off a straight drive! India 86/1

Fifty partnership up between Vijay and Pujara for the second wicket! Vijay collects a single off the fourth delivery of the over to bring up the milestone. India 57/1

India vs Sri Lanka, 2nd Test Day 2: Pujara collects a single off the second delivery of the final over of Day 2, guiding it towards the off side. Kohli rolls his wrists off the fifth delivery, placing it wide of short midwicket to collect his sixth boundary. Blocks the last ball, as India finish the day on a score of 312/2, with a lead of 107.

Day 1 report: India lost opener KL Rahul to end the opening day of the second cricket Test at 11/1 after bowling out Sri Lanka for 205 in the final session at the Vidarbha Cricket Association (VCA) Stadium here on Friday.

Opener Murali Vijay (2 not out) and No.3 Cheteshwar Pujara (2 not out) were at the crease when the umpires dislodged the bails for the day.

For the visitors, paceman Lahiru Gamage picked up the solitary wicket of Rahul, who got an inside edge back onto his stumps after trying to flirt with a delivery outside the off-stump. Rahul started the Indian response on a positive note, getting off the mark with a boundary through mid-off before going into a shell, which saw him consume 13 deliveries for his brief knock.

Ashwin, who went wicketless in the first two sessions, broke the backbone of the Lankan innings by removing skipper Dinesh Chandimal, who top-scored with a patient 122-ball 57 before adding three more wickets to return with figures of 4/67.

Resuming the final session at 151/4, the tourists found the going tough and lost wickets at regular intervals with their last six wickets falling for just 54 runs.

Besides Chandimal, opener Dimukh Karunaratne (51 from 147; 6x4) and stumper Niroshan Dickwella (24 from 30; 4x4) were the only other batsmen who managed to provide some resistance to the Indian spin duo.

The series is currently squared at 0-0 after the drawn opening Test at the Eden Gardens in Kolkata.