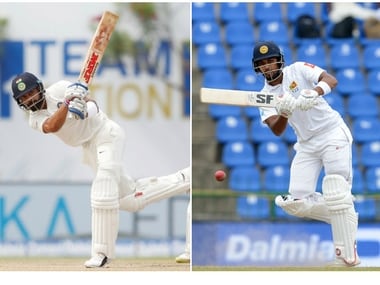 That is it from us today. We are set for an exciting finish with Dhawan stating they would look for a result. Sri Lanka still have the upper hand in the game and a few early wickets will give them more control. Join us tomorrow at 915 am. Till then, ta ta.

Players to have batted on each day of a Test:

Cheteshwar Pujara is set to become the ninth batsman to have batted on each day of a Test match.

The play has been called off and as India's No 4 and No 5 practice, the Lankan team cools down while the ground staff sweep the pitch. End of a fascinating day of cricket. Sri Lanka would be happy that they could stretch the lead in excess of 120, while Dhawan and Rahul's stand 166 would make the Indian camp feel good. 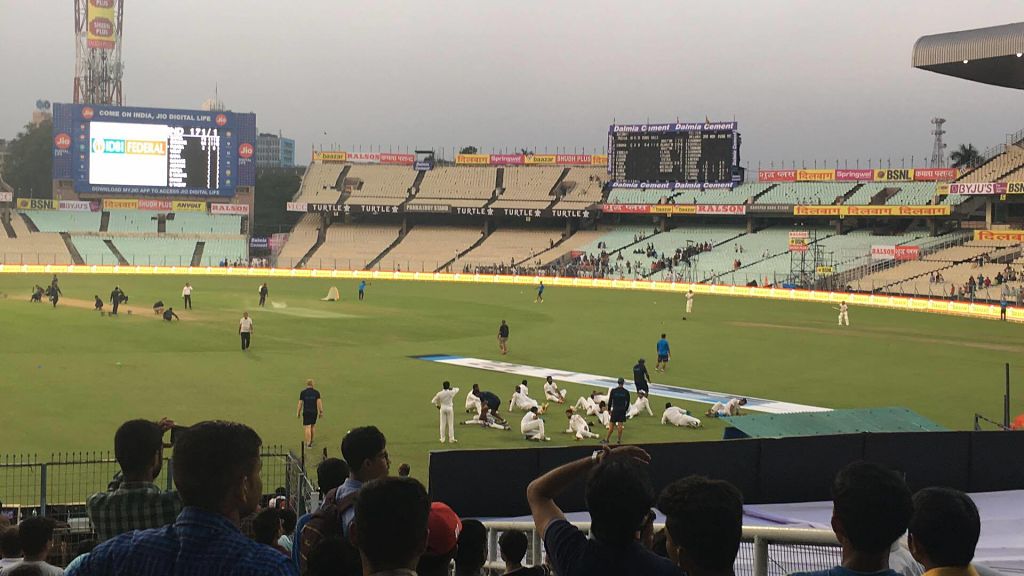 The crowd is applauding and cheering every shot that has come off Virat's bat. Ashwin joins Bangar and R Sridhar to roll his arm.

Oh no! The umpires have decided to leave the field and as soon as the batsmen started walking, the crowd started leaving. The few who were in the line behind, stop and see the Indian captain and vice-captain come out to bat.... but only for some practice. 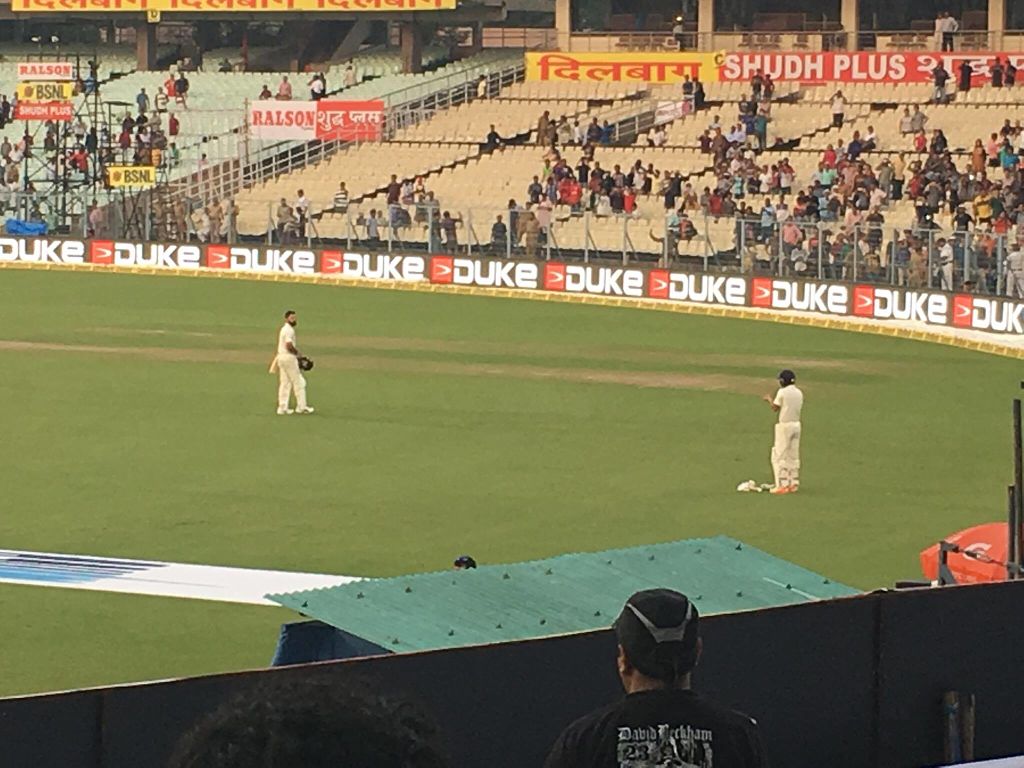 India have dominated a couple of sessions today after being behind the game upto that point. Sri Lanka's bowling has looked thin as the track as eased

The umpires are constantly checking light. They think its okay to continue for another over. So Shanaka steams in and bounces Pujara, who allows Dickwella to do his job. Then he flicks the second ball to backward square leg for a single. Then Rahul picks up a couple. And... the umpires are back and having a discussion. Play stopped due to bad light. It is stumps on Day 4 and India lead by 49 runs.

Brief chat between the two umpires. They haven't checked the light yet as we carry on with the game. It's not very dark or gloomy just yet. Perhaps we can get a few overs in. 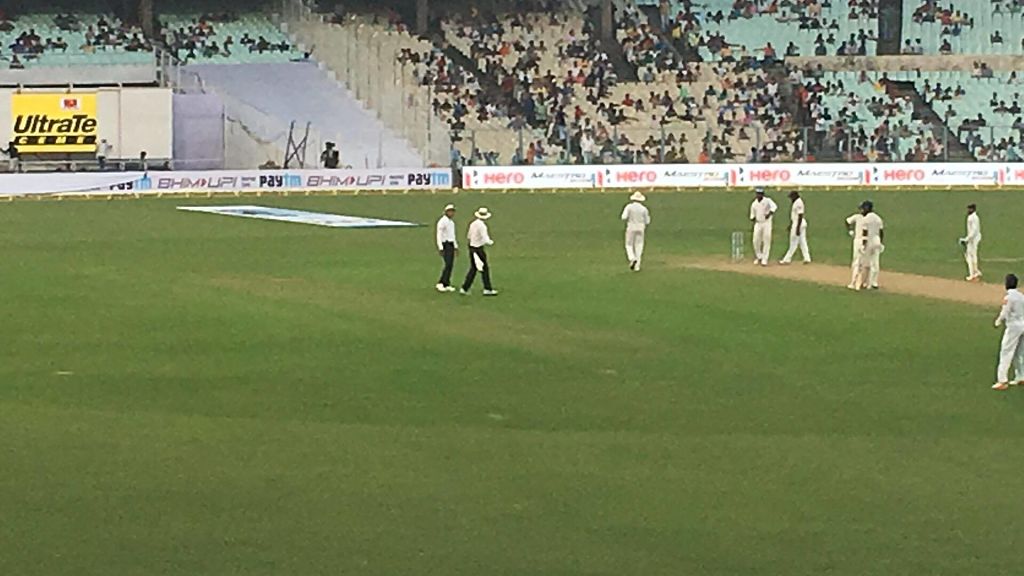 Rahul squeezes a single to gully. Pujara then flicks a short of length delivery to bacward square leg ot bring Rahul back on strike. Lakmal ends the over with short balls. Rahul gets out of its way.

OUT! Think I jinxed him. Dhawan misses his ton. The southpaw looked to drive but inside edged to Dickwella. Dhawan reviewd it immediately but replays indicate there was a small nick. Dhawan departs for 94.

FIFTY for Shikhar Dhawan! His fourth in Tests (with six centuries) and he gets to the milestone in 74 deliveries! Gets there with a single after guiding the ball towards the leg side off Perera, with seven fours coming off his bat so far!

100-stand up between Dhawan and Rahul for the opening wicket! Has been a fine comeback by the two so far in the innings, with both falling cheaply in the first essay! Dhawan brings up the milestone with a single off the last ball of the 24th over.

FIFTY for KL Rahul — his ninth such score in the last 11 innings! Gets to the milestone with a single after nudging the ball towards the leg side. He may have faltered off the very first ball of the match, but boy has he bounced back in this innings! Let's see if he can convert this one or not.

OUT! Sri Lanka bowled out for 294. Lakmal drags a Shami delivery onto his stump. They lead by 122 runs, which is quite substantial.

FIFTY! Umesh keeps it full and Herath caresses it through covers for a boundary. Completes his third fifty in the process.

OUT! What a beauty! Perera nicks it to Saha. Shami lands it on a length and the ball jags away to find the soft edge of Perera's willow. He walks back for 5 but survived 34 deliveries. Sri Lanka lead by 72 runs.

OUT! The Sri Lankan captain has been dismissed. Shami is on fire! Steams in and tempts Chandimal to drive. The Lankan captain does but only manages a thin edge to Saha.

OUT! Another one bites the dust. Shanaka fails to pick Bhuvi's inswinger, offers no shot and gets rapped on the pads. Umpire raises the finger but he reviews straightaway. The decision however stays. Shanaka bags a duck.

OUT! Shami hits the deck hard, moves it away and Dickwella edges it to Kohli at second slip. India have got an opening after the Sri Lankan domination early on. Dickwella walks back for 35.

India vs Sri Lanka, 1st Test Day 4 at Eden Gardens: The umpires are constantly checking light. They think its okay to continue for another over. So Shanaka steams in and bounces Pujara, who allows Dickwella to do his job. Then he flicks the second ball to backward square leg for a single. Then Rahul picks up a couple. And... the umpires are back and having a discussion. Play stopped due to bad light. It is stumps on Day 4 and India lead by 49 runs.

Day 3 report: Angelo Mathews (52) and Lahiru Thirimanne (51) helped Sri Lanka post 165/4 and trail India by only seven runs at stumps on the third day of the first cricket Test at the Eden Gardens on Saturday. India pacer Umesh Yadav took two wickets to get rid of the pair who stitched together a 99-run stand for the third wicket. At the close of play, skipper and birthday boy Dinesh Chandimal (12) and wicketkeeper-batsman Niroshan Dickwella (14) were at the crease.

The play had to be called off 41 minutes before scheduled time due to bad light.

In the morning session, Sri Lankan off-spinner Dilruwan Perera and pacer Lahiru Gamage shared two wickets each as India were skittled out for 172 in their first innings.

Saurashtra Test specialist Pujara completed his 16th half century while Saha then stitched together a 48-run partnership with Ravindra Jadeja before the all-rounder was fell lbw off Dilruwan Perera (2-19).

Pujara fell to a peach of a delivery from Lahiru Gamage. The right-arm pacer, who failed to get wickets in the first two days, beat Pujara all ends up with an in-cutter that jagged back off the surface and went between the Saurashtra man's bat and pad to rattle the off-stump. It was a big blow for India.

Saha got a reprieve when wicketkeeper Niroshan Dickwella missed an easy stumping off Perera when he was batting on 25.

With him was Jadeja, who upped the ante hitting two fours and the first six of the innings before being lbw, a decision which the tourists reviewed after umpire Joel Wilson – standing in place of indisposed Richard Kettleborough – did not rule in favour of Dinesh Chandimal and Co.

In the very same over, Saha gave an easy catch to Angelo Mathews trying to paddle sweep Perera. The local boy asked for the review after consulting with Bhuvneshwar Kumar at the other end but to no avail.

Bhuvneshwar scored 13 before got out off Lakmal's bowling while Mohammed Shami's quickfire 22-ball 24 helped India get past 150-run mark with Umesh Yadav (6 not out) at the non-striker's end.

Karunaratne left an inswinging Bhuvneshwar delivery which outwitted him and struck the knee-roll. The in-form 29-year-old asked for a review which turned out to be unsuccessful.

Thrimanne benefitted after being dropped on 27 by Shikhar Dhawan at first slip off Umesh's bowling, while Sri Lanka were 70/2.

With the conditions slightly improved for batting, the pair overcame the Indian bowling and played some good shots. Both scored eight fours each.

Both, however, fell prey to Umesh who bowled brilliantly in his second spell which read 7-1-25-2.

Thirimanne, who brought up his fifth fifty, edged to skipper Virat Kohli at second slip while Mathews, playing after missing out the Pakistan series due to a calf injury, was caught at short cover by Lokesh Rahul.