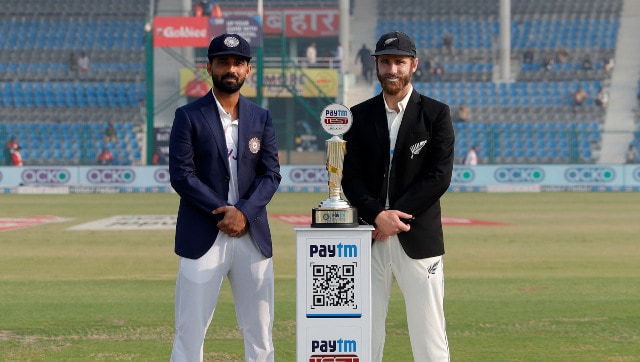 That brings us to the end of our coverage of the first Test between India and New Zealand in Kanpur. The caravan moves to the western part of the country, with Mumbai’s Wankhede Stadium hosting the second and final Test starting four days from now. It was a Test befitting the two finalists of the inaugural World Test Championship as the two sides fought tooth-and-nail till the very last ball on the final day, and ultimately ended up sharing the spoils for this game.

We hope you enjoyed our live coverage of the game. For now, this is Amit Banerjee signing off.

Shreyas Iyer is the Player of the Match

Iyer: It’s a great feeling, but if we won the game it could have been the icing on the cake. The wicket was still intact. My mindset was just to play the sessions. People say I’m very flamboyant and don’t control my instincts, but this time I decided to play for the team. It really helped the way Ashwin, Jadeja and Saha contributed. I am really proud of the way we turned things around. I’m really happy with the overall performance of the team. Pressure is always there. They got off to a great start, played two sessions very positively. Once we got a sniff, we saw that as a moment to attack, and we made the best use of the situation.

Ajinkya Rahane, India captain: Not really. I tried my best. They played really well throughout the game. But I thought the way we came back was great. We wanted to get that partnership going, we lost four-five wickets quickly. We were looking to bowl five-six overs in the end. I don’t think we’d have done anything different. It was about the light. As the fielding you want to bowl more overs. As a batting team, you don’t. It was all about rotating the bowlers, and they bowled really well. First of all, Im really happy for Shreyas. The way he worked on his game, his record in First-Class cricket is really good. Virat obviously is coming in the next game, and we have to wait and see. I won’t make any comments.

Kane Williamson, New Zealand captain: As we’ve seen throughout this Test, it’s been touch and go with the light. The Indian side are a formidable one, and they were on top for the most part. We just hung in there till the end. Given their quality bowling attack, we knew it was a lot of hard work. Lots of fantastic experiences today. Really good experiences today. We saw the emotions of a really good Test match. Was a great game overall. The two fast bowlers that we played were outstanding for us. Kept us in the game for long periods for time. Also the way the guys adjusted with the bat as well. But know we get to Mumbai on a different surface, and will prepare accordingly.

"We were keeping things under control and bowling in good areas. Light was always going to come in the last session, and we did expect it. We thought we could get the job done, and came together well. (On surpassing Bhajji) I know these are milestones that are constantly kept on tab. It’s wonderful. It’s the memories that matter, and I want to have some special memories going forward in the next three-four overs. The pitch has played its part going into the last three or four overs. Just tells you a story. Anybody can defend these days. Getting these tailenders not as easy anymore," says Ravichandran Ashwin in a chat after the close of play.

The man of the hour!

Tailenders and their fighting spirit!

Light or no light. Bowlers love batting. Here for the battle. Test cricket 🙌🏾

For New Zealand, the light at the end of the tunnel is the light meter.

Couldn't be more proud of his teammates

Incredibly gutsy performance. Proud of all you lads! @BLACKCAPS #INDvNZ

And that's that! The umpires say no further play is possible due to the light, and the first Test between India and New Zealand in Kanpur ends in a nail-biting draw, the two-match series currently level at 0-0.

Special credit to debutant Rachin Ravindra for sticking through to the very end to ensure New Zealand earn a hard-fought draw on foreign cycle that will no doubt come in very handy for them in the World Test Championship cycle.

And that's that! The umpires say no further play is possible due to the light, and the first Test between India and New Zealand in Kanpur ends in a nail-biting draw, the two-match series currently level at 0-0.

Special credit to debutant Rachin Ravindra for sticking through to the very end to ensure New Zealand earn a hard-fought draw on foreign cycle that will no doubt come in very handy for them in the World Test Championship cycle.

OUT! There's that celebrappeal from Jadeja again as he traps Southee leg-before, the ball staying low and hitting him bang in front of middle. Southee reviews, but there's nothing here to save him. NZ 155/9; India need one wicket to win

OUT! The move to take the second new ball works, as Jadeja traps Jamieson plumb leg-before in front of off and middle as the ball grips and turns. Surprisingly, Jamieson doesn't consider reviewing it. NZ 147/8

BOWLED! Blundell ends up playing onto his stumps while attempting to defend a delivery angled down leg, as Ashwin grabs his third wicket. NZ 138/7; India need three wickets to win

OUT! Jadeja's on a roll at the moment! Gets rid of the man who was standing between India and a victory, trapping the Black Caps leader plumb in front of the off stump. From 118/2, NZ lose their next four wickets for just 10 runs. NZ 128/6

OUT! NZ lose the review as Axar traps Nicholls LBW. A touch full on off, goes straight on. Nicholls stays in his crease and looks to defend but misses. The umpire lifts the finger on the appeal. Nicholls reviews but replays show it's plumb in front, all three REDS.

OUT! Jadeja strikes at the stroke of tea, trapping Taylor LBW with the veteran batter defending down the wrong line. The left-arm spinner went into a celebrappeal after the ball hit him bang in the middle of off and middle and angling into the batter. It's Tea on the final day, with New Zealand heading into the interval on 125/4

BOWLED! Latham chops the ball onto his stumps to depart after bringing up his half-century, as Ashwin delivers the key wicket for the Indians! With that, Ashwin also goes past Harbhajan Singh's Test tally of 417 wickets to become the third most successful Indian bowler in the format after Anil Kumble (619) and Kapil Dev (434). NZ 118/3

Fifty up for Tom Latham — his second in this match as 22nd overall in Test cricket! Brings up his milestone in 138 deliveries! NZ 111/2

OUT! Umesh Yadav strikes first ball after lunch, as Will Somerville goes for a hook towards the fine leg region off a short delivery. Shubman Gill pulls off a fine low catch in the deep, and Indai have their breakthrough! NZ 79/2

Fifty of the partnership up between Latham and Somerville for the 2nd wicket, the latter bringing up the milestone with a single off Jadeja in the 21st over. NZ 53/1

India vs New Zealand, Day 4 report: Shreyas Iyer and Wriddhiman Saha struck half-centuries on Sunday before India declared its second innings on 234-7 on day four of the first test against New Zealand to set the tourists a target of 284 in Kanpur.

Iyer scored 65 runs, while Saha was unbeaten on 61 runs as they resurrected the Indian innings from a precarious 51-5.

At stumps, New Zealand was on 4-1 with Tom Latham on 2 and William Sommerville on nought after losing Will Young (2) shortly before the close of play.

Earlier, India had reached 84-5 at lunch after Kyle Jamieson (3-40) and Tim Southee (3-75) ran through the Indian top-order in the morning.

Cheteshwar Pujara (22) nicked off his gloves down leg side off Jamieson. Southee had Mayank Agarwal (17) caught at slip and then trapped Ravindra Jadeja lbw for nought.

Then, Iyer put on 52 runs for the sixth wicket with Ravichandran Ashwin (32) on either side of lunch and rescued the Indian innings.

Following his debut hundred in the first innings, Iyer's half-century in the second innings came off 125 deliveries and included eight fours and a six.

Sunil Gavaskar was the last Indian batsman to score 50-plus in both innings of his debut test, a feat he managed against the West Indies in 1971 .

“I had been in this situation before as well in domestic cricket. My mind set was to play the session and play as many balls as possible. I wasn’t thinking too far ahead,” Iyer said.

He also became the first Indian batsman to score a hundred and a half-century on his test debut. “It feels good (to have that record) but the most important thing is to win the match... We felt that 250 including the first innings lead would have been a good score, so we’re very happy with where we are now,” Iyer added.

Jamieson bowled Ashwin after India crossed 100. Iyer then added 64 runs with Saha as they helped India reach a defendable total.

Southee dismissed Iyer before tea as India reached 167-7 at the break.

Saha scored his sixth test half-century and put on 67 runs with Axar Patel (28 not out) for the eighth wicket.

India declared with little time left in the day but Ashwin managed to remove Young before stumps. The ball seemed to be missing leg but the batsman ran out of time to use a DRS review.

New Zealand will need 280 runs on the final day for victory.

India scored 345 in the first innings thanks to Iyer’s 105 and New Zealand was bowled out for 296 in reply as Axar Patel took 5-62 on day three.

For the latest match Cricket Live Score, follow the Live Score and updates of the match here

India vs South Africa, Live Cricket Score, 2nd Test at Johannesburg, Day 4, Latest Scorecard and Updates: DONE AND DUSTED! Elgar finishes it in impeccable fashion, smashing a boundary over deep midwicket to register their first-ever win over India in a Test at the Bull Ring. Ashwin bowled the over, Elgar and Bavuma scored a single each before the skipper finished things off. The Test series is level at 1-1 heading to final Test in Cape Town that starts on 11 January.