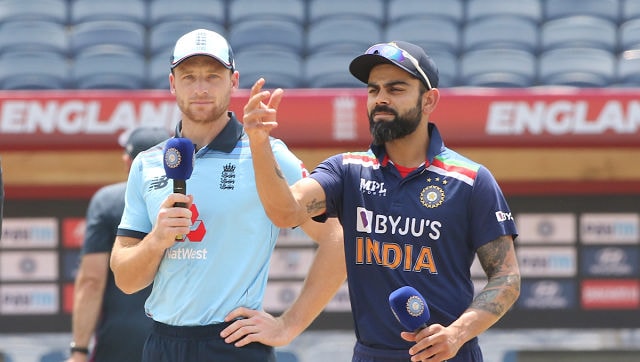 England will look to sign off the India tour on a high after levelling the ODI series 1-1.

And that brings curtains down to an exciting edition of England's tour of India 2021, whuch started back in February first week. The hosts were dominant across all three format, but it was not without fighting efforts from the opposition in crunch situations and matches. India comfortably sealed the Tests 3-1, but the T20Is and ODIs went down to the wire with Virat Kohli and Co emerging victorious. We hope you enjoyed our coverage as much as we did. Next up, it's the 14th edition of the Indian Premier League (IPL), which starts on 9 April. Until then, it's goodbye and good night!

Virat Kohli, India skipper: When the top two teans battle, you gewt very exciting games. It was a tough game. Sam played a really good innings to keep them in the hunt. The mindset shifted in the last two overs. I think Hardik and Nattu brilliantly finished it off. Our body languague was outstanding tonight. It's most disapponting for the guy who drops the catch, but as much as you get disappointed, catches get put down and sometimes they cost you. There's no lack of intent, and our body language was outstanding. I'm surprised Shardul wasn't the man of the match, and Bhuvi wasn't the man of the series. A lot of credit to them for bowling so well in adverse conditions. Prasidh and Krunal were impressive but death overs batting was extremely good.

Jonny Bairstow, Man of the series: I've been pleased with my striking, but we'd like to be on the winning side. Today, it just wasn't meant to be. I didn't score a lot in the Tests, but it was pleasing to come back and do well in the white-ball leg and I'll be taking the confidence into the IPL. We know Bhuvi's skills, and I think getting outside off is the way to counter it. We had a conversation about it and we played him in the Sunrisers' camp, so we'll have practice against him, don't worry about that. Curran was special wasn't he? He's played out of his skin, and we know the quality and talent he has, and the belief he had to take us over the line, but congratulations to Nattu and how he executed the yorkers at the death. There's not many people I would trust more than Sam to clear the short boundaries and he was absolutely fantastic today.

Sam Curran, Man of the Match: "We didn't win the game, but happy with the way I played. I love winning, but it was a great experience. I haven't done that for England for a long time, but in the end we lost. I wanted to take the majority o the balls and take it deep. It was hard to defend, but Natarajan bowled really well in the end and shows why he's a really good bowler."

England captain Jos Buttler: A fantastic game,both sides made some mistakes but played some brilliant cricket. We witnessed an incredible knock from Curran to nearly get us over the line, but congratulations to India on winning. We've learnt a lot as a side and seen many guys stand up and take the lead. The white-ball leg was incredibly competitive. These are the conditions we will face in the near future in the World Cup. It's a great experience for the young guys to play a top-class side like India and they will be better cricketers for it. We didn't bowl that well at the top, gave away easy boundaries, but dragged it back only to be pegged back by Pant and Pandya, but we restricted them well enough. We didn't have those big partnerships to take us over the line. We've played excellent cricket for a number of years, the talent pool in white-ball cricket is growing and creates competition in the squad and drives us to do better. We bat deep as a side, it's one of our strengths, but Sam Curran did well to take responsibility, and take a lot of the strike and it took great character to play the way he did, and he has those amazing qualities in abundance. I know he will be disappointed he didn't get us over the line, but we are all very proud of him and his performance.

Highest scores for England batting at No.8 or below in an ODI:

DONE AND DUSTED! India hold their nerve to clinch the series with a nervy seven-run win in the third ODI! England needed 14 to win, but Natarajan stepped in and completed the job, conceding just six runs off it. It was not a perfect win in this match, amid a few drop catches and run-out opportunities, but the hosts did manage to finish the cross line in the end. You've got to feel for Sam Curran (95*), whose resilience at least took the game down to the wire.

OUT! A huge, huge relief for India as Hardik Pandya quickly throws the ball to Pant, who runs out Mark Wood. Clever work from Pandya. Mark Wood run out (Hardik Pandya/Pant) 14(21)

Hardik is in. Bhuvneshwar and Shardul have completed their quota of 10 overs. Drop catches, drop catches and more drop catches! Shardul's the latest to fumble a glorious opportunity to see off Wood, that is followed by Nastarajan dropping, allowing Curran to collect two runs. Disastrous over this for India. 14 needed off 6 balls!

Bhuvi comes up for his final over. Curran takes strike and straightaway picks a single. No boundaries in the over but two costly wides. Wood is originally given out on-field but England decide to review. Wood is beaten on the inside edge, but there's nothing on UltraEdge, and hawkeye shows the wickets are missing. This match is going down to the wire. Four runs off it. England need 19 runs off 12 balls.

DONE AND DUSTED! India hold their nerve to clinch the series with a nervy seven-run win in the third ODI! England needed 14 to win, but Natarajan stepped in and completed the job, conceding just six runs off it. It was not a perfect win in this match, amid a few drop catches and run-out opportunities, but the hosts did manage to finish the cross line in the end. You've got to feel for Sam Curran (95*), whose resilience at least took the game down to the wire.

OUT! A huge, huge relief for India as Hardik Pandya quickly throws the ball to Pant, who runs out Mark Wood. Clever work from Pandya. Mark Wood run out (Hardik Pandya/Pant) 14(21)

OUT! Stunning catch from Kohli at the covers to remove Adil Rashid! Adil Rashid c Kohli b Thakur 19(22)

OUT! Is that it? Is that possibly the game for England? Malan falls to the hands of Rohit Sharma at short midwicket courtesy a short ball outside off delivery from Shardul. Malan c Rohit b Thakur 50(50)

FIFTY! Dawid Malan gets to his maiden ODI fifty with a four towards deep midwicket. Well played under pressure!

OUT! Caught and bowled by Shardul Thakur as Livingstone departs. Partnership finally broken! Livingstone c and b Thakur 36(31)

Big, big wicket! England skipper Jos Buttler is out lbw by Shardul Thakur! It's initially goven not out, UltraEdge confirmed there was no bat involved and there wasn't inside edge.

OUT! Bairstow's given lbw, and England review straightaway! In the review, the ball is pitching outside off, impact is in line and it's umpire's call. Wicket No 2 for Bhuvi. Bairstow lbw b Bhuvneshwar 1(4)

OUT! Bhuvneshwar Kumar sees off the dangerous Jason Roy, thanks to a back of a length inswinger ball. The stumps are rattled Roy b Bhuvneshwar 14(6)

OUT! Hardik walks across the crease, tries to tickle the ball towards fine leg but he misses the shot, getting his leg stump rattled in the process. Hardik Pandya b Stokes 64(44)

50! Seventh half century for Hardik. Four fours and three sixes thus far from him. But he’ll feel that the work’s only half done.

50! Pant doing Pant things! He gets to the milestone with a massive six over deep mid-wicket. India will be delighted. Back to back half-centuries from him.

OUT! BOWLED! The Indian captain departs. Another big wicket. Kohli misses the ball and it rattles the stumps. Ali with the breakthrough.Classic dismissal for an off spinner. Kohli b Moeen Ali 7(10)

OUT! Soft dismissal. Dhawan looks to whip it towards the on side. Instead, chips it back to Rashid. Second wicket for the leggie. Another googly there. Big wicket this. Dhawan c and b Adil Rashid 67(56)

OUT! CLEAN BOWLED! The googly from Rashid does the trick. There was a gap between Rohit’s pad and bat and the ball went through that. Any leg spinner will be delighted with that dismissal. Rashid draws first blood. Rohit b Adil Rashid 37(37)

50! Shikhar Dhawan gets to the milestone with a boundary. 32nd ODI half century from the left hander. He has looked comfortable at the crease today. Some fine striking.

Toss update: England have won the toss and opted to bowl first.

Virat Kohli and Jos Buttler at the toss. Sportzpics

India vs England Live Score, Live Cricket Score, 3rd ODI at Pune Live Updates: DONE AND DUSTED! India hold their nerve to clinch the series with a nervy seven-run win in the third ODI! England needed 14 to win, but Natarajan stepped in and completed the job, conceding just six runs off it. It was not a perfect win in this match, amid a few drop catches and run-out opportunities, but the hosts did manage to finish the cross line in the end. You've got to feel for Sam Curran (95*), whose resilience at least took the game down to the wire.

Preview: With the series on the line once again, visitors England will look to sign off their India tour on a high when they take on Virat Kohli and Co in the third and final ODI at the Maharashtra Cricket Association (MCA) Stadium in Pune on Sunday.

England lost the Test series 3-1 before conceding the T20Is 2-1, and an ODI series should surely bring smiles on the visiting camp.

Matters turned from bad to worse for the world champions when skipper Eoin Morgan was ruled out of the last two one-dayers after sustaining a split webbing between his index finger and thumb in his right hand. As a result, Jos Buttler took over the captaincy duties for the remaining games. Meanwhile, speedster Jofra Archer, too, was ruled out of the ODIs after sustaining a hand injury and the ECB in a statement said that Archer would undergo a surgery on Monday. Archer has already returned to the UK.

Meanwhile, India’s focus will be on their bowler department after their batsmen fared pretty well in the second ODI.

This may prompt the hosts to swap the duo with Yuzvendra Chahal and Washtington Sundar.

England allowed India’s last three wickets to add 93 runs, particularly galling given their first five only managed 98, a lot might have changed for Ben Stokes’ side but some things just stay the same.