India Under-19 Vs Bangladesh Under-19 LIVE SCORE (odi)

India Under-19 Vs Bangladesh Under-19 At Queenstown Events Centre, Queenstown, 26 January, 2018 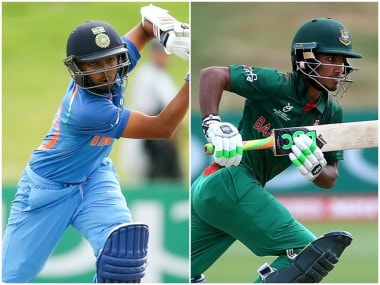 This Indian team has looked way superior to their opponents so far. Bangladesh pulled things back with the ball to bowl India out, but 265 was a good total in itself. Bangladesh did stitch couple of good partnerships at the top, but they lost wickets at regular intervals with spinners tightening the noose. Required rate kept climbing and the young boys wilted under pressure, leading to rather reckless run outs. Credit must be given to agile Indian fielders for that too. After the middle-order collapse, the game was heading only India's way.

India is the only team to remain unbeaten in the tournament. With four massive victories under their belt, Prithvi Shaw's side looks set for the challenge Pakistan will present, as the two teams will collide on 30 January, Tuesday. The match will begin at 3 am IST and we will be here, do give us company. Until then, its goodbye from us.

Congratulations to the India under-19 boys on yet another comprehensive win and booking a place in the #U19CWC semi-finals against Pakistan.#INDvBAN

Surely, its going to be massive contest between the two sides. With both teams having quality pace attack it will be very different from the contests that we have seen in the past.

So, it’s the mouthwatering #IndvPak in the #U19CWC Semifinal 😊🙌🏏 well played, India. One step closer to the 🏆

This is how the last four have been lined up

India have beaten Bangladesh by 131 runs to clinch the fourth and final spot in the #U19CWC semi-finals!

Prithvi Shaw, India captain: All the credit to our boys. They did well, they were pumped up. We do discuss during training session and fast bowlers and spinners executed the plans well. We have someone bowling in the 140s and it helps when they pick up wickets in the powerplay. Abhishek is a great all-rounder, fields really well, bowls well, and can hit some big sixes, I really enjoy batting with him.

Hasan Mahmud, Bangladesh captain: We started the bowling well, but we couldn't keep going. They had a partnership but our spinners did well to restrict them. We could have been more positive with the bat. Plan was to not lose wickets in the firs ten overs.

ALL OUT! India win by a 131 runs. Another thumping performance to stamp their authority. They march into the semi-finals and set up a tie against Pakistan. Nagarkoti hits the base of the off stump to clean up the innings. Perfect yorker sends Nayeem's stump for a walk. Too hot for him to handle, the bat misses the line of the ball completely and that completes the formalities that were remaining.

ALL OUT! India win by a 131 runs. Another thumping performance to stamp their authority. They march into the semi-finals and set up a tie against Pakistan. Nagarkoti hits the base of the off stump to clean up the innings. Perfect yorker sends Nayeem's stump for a walk. Too hot for him to handle, the bat misses the line of the ball completely and that completes the formalities that were remaining.

OUT! Edged and gone! Mahmud becomes the latest batsman to be dismissed for a duck. Playing away from the body the edge flew to first slip.

OUT! Wise, this is extremely smart bowling by Abhishek. Such a thinking bowlers. Lures Hossain into a big shot. He doesn't have too many options goes for the bait and ends up hitting it down Riyan Parag throat.

OUT! Falling apart rather quickly for Bangladesh. Qazi Onik is out for a golden duck. Plays inside the line with the ball going past the outside edge and into the off stump.

OUT! Mavi gets his second wicket. Dragged on by Mahidul, has his furniture disturbed. Undercuts the ball onto his stumps. Bangladesh losing their way.

OUT! Another bit of confusion. Another brilliant piece of fielding. Another run out! Hossain nudges it to square leg and isn't keen on a single. Aminul Islam think he can make it and runs towards the danger end. Nagarkoti displays another outstanding piece of fielding pouncing on the little opportunity. Runs, jumps and dives to his right and throws it at a comfortable height for keeper Desai to effect the run out.

OUT! The Indians have been hitting the stumps a few times in this innings, a wicket was just one direct-hit  away.Towhid Hridoy is gone! Spectacular piece of fielding. Hridoy is sent back after nudging it to point and running off for s ingle. Mavi runs in and hurls it to keeper's end, hitting the stumps.

OUT! Ghosh's chance to try and slog it out of the ground, he only manages a top edge with square leg fielder, Ishan Porel, completing the catch but not before some confusion with wicket-keeper Harvik Desai.
Pinak Ghosh c Ishan Porel b Anukul Roy 43(75)

OUT! There it is! Hassan goes for the drive ends up edging it to first slip. Good catch by Abhishek, who remained composed and moved slightly to his left to catch the ball that was traveling rapidly

OUT! Pressure of dots was clearly getting the better of the Bangladesh's batsmen, one of the two had to go for the shots, Naim preferred to go straight over bowler's head. His intention was right, but execution wasn't. Easy catch for mid on fielder. Mavi persistence pays off India gets the first wicket.

ALL OUT! India are bowled-out for 265. Skipper Saif Hassan finishes India's innings by bowling Shiva Singh, who had gone too far across. He fails to connect, but Hassan does.

OUT! Abhishek Sharma has feathered this through to keeper, but what an innings!

OUT! Mavi has holed out to deep midwicket.

OUT! That's Onik again! A bit of an off-cutter, and Nagarkoti has edged this to the keeper.

OUT! Riyan Parag is gone. Pulls Onik to midwicket, where skipper Hassan dives forward to complete a good catch.

OUT! Shubman Gill is gone. he under-edges Nayeem and a fine innings come to an end.

OUT! Desai is bowled here by Nayeem. Tries to create some room again, does Desai but misses. Handy innings.

FIFTY! That's a sublime fifty from Gill, off 48 balls. He has scored a 50 each time he has batted in this World Cup. What a talent. He came in early today, but has looked in no trouble. He hits this length ball from Robiul Hoque to mid-on to get to the milestone.

OUT! Shaw is gone! That's an off-cutter from Onik, takes some bat too, and takes down Shaw's off-stump. Great bowling.

OUT! Manjot goes hard at the ball again. No timing, and a good catch by Towhid Hridoy at short-point. That's the first blow to India.

It's toss time, and Prithvi Shaw has won the toss and has decided to bat first.

Live, ICC Under-19 quarter finals, India v Bangladesh, latest update: India win by a 131 runs. Another thumping performance to stamp their authority. They march into the semi-finals and set up a tie against Pakistan. Nagarkoti hits the base of the off stump to clean up the innings. Perfect yorker sends Nayeem's stump for a walk.

Preview: An unbeaten India will start overwhelming favourites but will have to guard against complacency against a tricky Bangladesh in the quarter-finals of the ICC U-19 World Cup in Queenstown on Friday.

Three-time champions India were hardly tested in the league stage where they thumped Australia, Papua New Guinea and Zimbabwe to top Group B.

They meet Bangladesh who finished second in Group C after the loss against England in their previous game. Both teams would be fresh going into the knockout fixture. Bangladesh faced England last Thursday while India completed a 10-wicket rout of Zimbabwe on Friday.

When they take the field, India would also have in mind the loss they endured against Bangladesh that knocked them out of the Asia Cup in Kuala Lumpur last November.

However, key players like captain Prithvi Shaw did not take part in that tournament.

While Bangladesh played against England at the Queenstown Events Centre, India were based in Mount Maunganui through the league stage.

It is worth mentioning that the last match here, the quarterfinal between England and Australia, was a low-scoring affair with Australia able to defend a meagre 127.

England were shot out for 96 with leg-spinner Lloyd Pope picking up eight wickets.

Both India and Bangladesh boast of players with first- class experience.

While six of India's squad have played in Ranji Trophy, five Bangladesh players, who took the field against England, have featured in the National Cricket League back home.

Left-arm spinner Anukul Roy has been the leading wicket- taker for India with 10 scalps while skipper Shaw and Shubman Gill have been among the runs.

The batting, however, has not been tested fully so far as India's two wins in the league stage came with a 10-wicket margin.

Injured pacer Ishan Porel might be able to return for the key game though India have enough fast-bowling firepower courtesy Shivam Mavi and Kamlesh Nagarkoti.

The highly-rated Indian batsmen will need to be wary of Bangladesh medium pacer Hasan Mahud and off-spinner Afif Hossain, who both have five wickets to their name in three appearances.

All-rounder Hossain has also made a significant contribution with the bat, scoring 124 runs at 41.33.

Their leading run-getter has been number four Towhid Hridoy (134 runs), who smashed a match-winning 122 against Canada.