Why was a Russian organisation awarded the Peace Nobel with a Belarusian activist and a Ukraine rights group?

The Nobel Peace Prize 2022 has been awarded to Ales Bialiatski, Memorial and Center for Civil Liberties. Image Courtesy: Twitter/@NobelPrize

They have “promoted the right to criticise power and protect the fundamental rights of citizens” for several years, the committee added.

“They have made an outstanding effort to document war crimes, human right abuses and the abuse of power. Together they demonstrate the significance of civil society for peace and democracy,” it said.

With all three awardees from Belarus, Ukraine, and Russia, the prize is seen by some as a message amid the ongoing war between Moscow and Kyiv.

On being asked if this year’s winners are “a timely birthday present” to Russian president Vladimir Putin on his 70th birthday today (7 October), Berit Reiss-Andersen, the head of the Nobel committee, said they give a “prize for something and to somebody and not against anyone.”

“This prize is not addressing President Putin, not for his birthday, or in any other sense – except that his government, as the government in Belarus, is representing an authoritarian government that is suppressing human rights activists,” Reiss-Andersen was quoted as saying by The Guardian.

They have made an outstanding effort to document war crimes, human right abuses and the abuse of power. Together they demonstrate the significance of civil society for peace and democracy.#NobelPrize #NobelPeacePrize

Who are the winners of the 2022 Nobel Prize for Peace? Let’s take a closer look.

ALSO READ: Explained: Why the Nobel Peace Prize is the most controversial award ever

Ales Bialiatski is a writer and human rights activist in Belarus, who has been in detention without trial since 2021.

One of the pioneers of the democracy movement that swept Belarus in the mid-1980s, Bialiatski has “devoted his life to promoting democracy and peaceful development in his home country,” the committee said as per CNN.

One of the leading non-governmental organisations in Belarus, Viasna documents human rights abuses and monitors elections, as per Right Livelihood.

“Since its inception, Viasna has been relentlessly persecuted by the Belarusian authorities, which has seen its members subjected to repeated arrests, detention, beatings, raids and fines,” notes Right Livelihood. Ales Bialiatski has been in jail since 2021. Image Courtesy: Twitter/@franakviacorka

The Belarusian authorities have denied registration to Viasna since 2003.

Earlier, Bialiatski was arrested in August 2011 on “trumped-up” charges of tax evasion and sentenced to four and a half years in prison.

International organisations had condemned his imprisonment, saying it was retaliation for his human rights work.

Bialiatski wrote a book titled ‘Enlightened by Belarus’ in 2013 when he was in jail.

It was temporarily banned by the European country which claimed that the book “damages the image the Republic of Belarus”, reports the Human Rights Foundation.

The human rights advocate was released 20 months ahead of schedule on 21 June 2014.

He was the maiden winner of the Václav Havel Human Rights Prize in 2013, which was awarded to him during his imprisonment.

Noting that Bialiatski has been behind bars for over a year now, the Nobel committee said, “Despite tremendous personal hardship, Bialiatski has not yielded an inch in his fight for human rights and democracy in Belarus.”

Belarus politician and Bialiatski’s close friend Franak Viacorka said the prize was a “recognition for the whole Belarusian people in standing up to president Alexander Lukashenko”.

Having received the Nobel Prize, Ales Bialiatski became one of Lukashenka’s main enemies. He won’t be released. Lukashenka will hold Ales hostage. Our task here, and the task of all democratic countries, is to fight for the release of Bialiatski and other political prisoners. pic.twitter.com/MzM9fJBCBu

He told Reuters that the activist was imprisoned in “inhumane” conditions and he hopes the Nobel prize would lead to Bialiatski’s release.

The Russian human rights group Memorial was established in 1987 during the regime of late Soviet leader Mikhail Gorbachev.

Andrei Sakharov, who won the Nobel Peace prize in 1954, and human rights advocate Svetlana Gannushkina were among the founders of Memorial.

The Nobel committee said the group was formed by “human rights activists in the former Soviet Union who wanted to ensure that the victims of the communist regime’s oppression would never be forgotten.” The group played a significant role in documenting “abuses and war crimes” committed by Russian and pro-Russian forces during the Chechen wars, reports CNN.

Natalia Estemirova, the head of the Memorial’s branch in Chechnya, was killed because of this work in 2009, the Nobel committee mentioned.

In 2014, Memorial was added to the list of ‘foreign agents’– a compilation of organisations and individuals that the Russian government alleges receive funding from abroad.

One of the reasons the court gave for the move was the organisation’s “failure” to tag some of its social media posts with a “foreign agent” disclaimer, reports BBC.

The group had responded to the ban, saying “nobody plans to give up”, as per Indian Express.

“The disappearance of Memorial in Russia will become a symbol of a deep moral fall and the definitive symbolic estrangement of the Russian man from the civilisation of the 21st century,” dozens of prominent Russian figures said in an open letter then.

“The wounds, which have not healed over the 30 post-Soviet years, are bleeding again,” AFP cited the letter as saying.

Memorial told Reuters today (7 October) that the Nobel Peace prize was a recognition of its human rights work and of colleagues who continue to suffer “unspeakable attacks and reprisals” in Russia.

Founded in 2007 in Kyiv, Center for Civil Liberties was established to advocate human rights and democracy in Ukraine.

“The center has taken a stand to strengthen Ukrainian civil society and pressure the authorities to make Ukraine a full-fledged democracy, to develop Ukraine into a state governed by rule of law,” Berit Reiss-Andersen was quoted as saying by The Guardian. 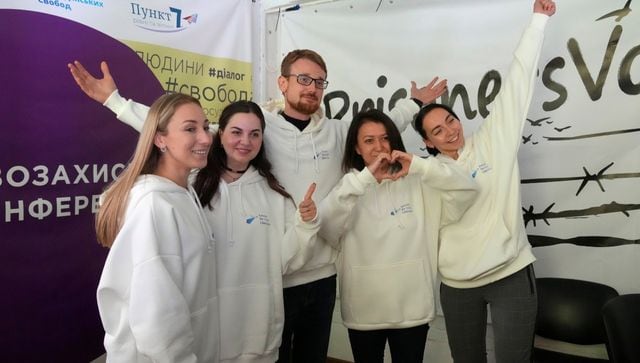 After Russia’s invasion of Ukraine in February this year, the organisation has been recording “Russian war crimes against Ukrainian civilians”, notes Associated Press (AP).

Reacting to the prize, the group wrote on Twitter it was proud.

A representative for the Center for Civil Liberties, Volodymyr Yavorskyi, told AP that the award was important as “for many years we worked in a country that was invisible”.

He said the award was “surprising” for them, adding that “human rights activity is the main weapon against the war”.

In an unprecedented move, the Chinese foreign ministry on Thursday removed questions related to Nobel Peace Prize winner Liu Xiaobo from the transcripts of its daily media briefings available on the official website.

Satyarthi will join leaders and experts on issues related to child slavery in conflict and commercial sexual exploitation.

Four Nobel Peace laureates who were in jail when they won

Furious over the Norwegian Nobel Committee's decision to award Carl von Ossietzky, Adolf Hitler banned all German citizens from accepting a Nobel in any category