Missed chance at CM's chair, but now Congress chief: The rise and rise of Mallikarjun Kharge

Born into a poor family in Karnataka’s Gulbarga district, Mallikarjun Kharge studied law and practised for a time before joining the Congress in 1969. The 80-year-old is an eight-time MLA, two-time Lok Sabha MP, and is currently a Rajya Sabha member

Mallikarjun Kharge made on Wednesday made history by defeating Shashi Tharoor in the race for Congress president, becoming the first non-Gandhi party chief in 24 years.

Kharge emerged victorious by an overwhelming majority, receiving 7,897 votes compared just to 1,000 for Tharoor, while 416 votes were deemed invalid.

Tharoor, his rival for the top Congress job, immediately issued a statement conceding defeat and congratulated the new Congress president-elect.

“I believe the revival of our party has truly begun today,” Tharoor said in his statement.

But who is Kharge? What do we know about him?

Who is Mallikarjun Kharge?

Kharge, a leader from the Dalit community, has stayed away from controversies and maintained a clean image throughout his decades-old political career.

Born on 21 July, 1942, in a poor family in Karnataka’s Gulbarga district, Kharge studied law and practised for a time before joining the Congress in 1969, as per Indian Express.

Kharge ventured into electoral politics in 1972 and four years later, he became a minister for the first time in the Devaraj Urs government. 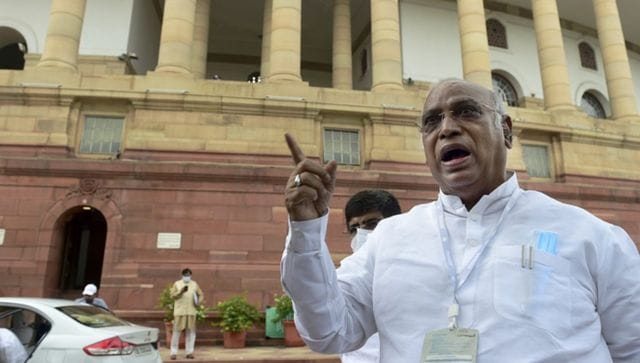 He won from his home constituency of Gulbarga nine consecutive times in the Karnataka Assembly elections between 1972 and 2008.

After that, he shifted to national politics and was victorious in two successive Lok Sabha polls (2009 and 2014) from the Gulbarga seat.

In 1994, Kharge was appointed the Leader of the Opposition in the Karnataka Assembly, a role he assumed again in 2008.

Kharge has served as a minister in six different governments in Karnataka but missed his chance at the chief minister post thrice– in 1999, 2004 and 2013.

In 1999, he lost the Karnataka chief minister chair to SM Krishna and had to settle for the home portfolio.

Dharam Narayan Singh was made the chief minister in 2004. As per News18, Kharge’s supporters had beseeched him to express his dissatisfaction with Sonia Gandhi and decline the ministerial berth. However, the seasoned leader had rejected their requests, saying he never went against the Gandhis and would not embarrass them.

In 2013, Congress came back with a thumping majority in Karnataka and Siddaramaiah was sworn oath as the chief minister.

Working as the president of the Karnataka Pradesh Congress Committee in 2005-08, Kharge had delivered Congress the largest number of seats against the then ruling alliance of BJP and JD(S), notes The Hindu.

Kharge, known as ‘solillada saradara’ (a leader without defeat), suffered the first loss in his electoral career in 2019 when he was trounced by the BJP’s Umesh Jadhav in the Gulbarga Lok Sabha constituency by a margin of 95,452 votes.

However, the Congress leadership brought him back to the Parliament through the Rajya Sabha route and he was elected unopposed to the Upper House in June 2020 from Karnataka. A follower of Buddhism, Kharge is the founder-chairman of Siddharth Vihar Trust which constructed the Buddha Vihar complex in Gulbarga, as per The Times of India.

Kharge played a significant role in granting the special status for six districts of the Kalyana Karnataka region under Article 371J of the Constitution during the second UPA government, reports The Hindu.

The veteran leader has  become the sixth from southern India to hold the top Congress post after Independence.

Kharge will become the second politician from Karnataka to helm the grand old party after Lingayat community leader S Nijalingappa, who held the Congress president post from 1968-69,.

After hearing the arguments of both sides to the dispute, the court had, on 27 October, reserved its order on the suit for 8 November

A video of Sanjay Nishad is going viral in which he while addressing his workers from the Nishad community in Ballia, advised them to learn from the dog and the donkey