Students chant 'we want justice' slogans as they protest at Chandigarh University in Mohali. PTI

Chandigarh University in Punjab’s Mohali saw massive protests over the weekend after news broke that a female student had leaked objectionable videos of her female colleagues. The protests, which ended at 2 am on Monday, led to Chief Minister Bhagwant Mann to also order a probe.

Punjab | Numbers of students protesting inside the #ChandigarhUniversity in Mohali swell, as they continue to protest over the alleged ‘leaked objectional videos’ row late into the night https://t.co/9cnEhjmimL pic.twitter.com/UWYVrQfvuV

The protests ended after the district and university administration assured students that a fair probe would be carried out.

But what exactly happened? What action has the police taken up till now? We explain it all.

On Saturday, irate students of Chandigarh University came out in large numbers protesting and chanting ‘we want justice’ slogans after it emerged that a female student had leaked videos of around 60 girls taking baths in the hostel.

The students of the institution raised questions over the university authorities claiming that the accused women did not film any other girl. They contended how the authorities could give a clean chit without the forensic report.

The protesting students confronted university and police officials, who were called in, questioning that “if nothing had happened on the campus” why had the university declared 19 September and 20 September as “non-teaching days”.

They demanded an apology from the police and district administration for calling the objectionable videos of some students as rumours. They claimed the accused woman had admitted she had made the videos.

Earlier, university officials had denied that a female student had leaked objectionable videos of other students with University Pro-Chancellor Dr RS Bawa being quoted as saying to NDTV, “The rumour which is circulating through media that 60 objectionable MMS have been found of students... is totally false and baseless.” 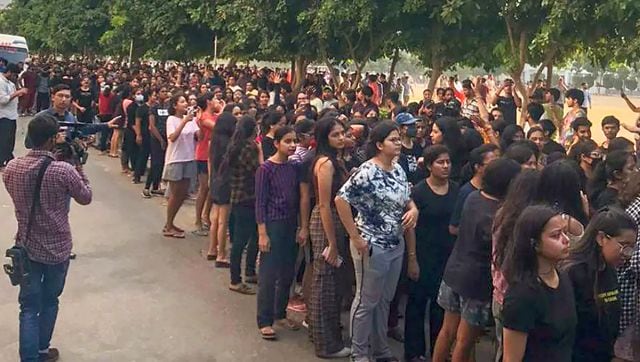 The protests at Chandigarh University prompted authorities to issue a two-day closure for the institution. PTI

Simultaneously, a 23-year-old Sunny Mehta, a resident of Shimla’s Rohru, was also arrested and handed over to the Punjab Police. The Himachal Police also detained another 31-year-old man in connection with the case.

Students at the university claimed that the female accused had recorded videos of the girls bathing and then passed it on to the 23-year-old male accused, who uploaded these videos on the internet.

Mohali Senior Superintendent of Police Vivek Sheel Soni said the arrested student’s mobile phone had been seized for forensic analysis. An FIR has been filed under IPC Section 354C (voyeurism) and the IT Act and a further probe was being carried out.

The police also refuted claims of students attempting suicide after the incident.

Punjab | No information about suicide has come out. It is a rumor that has been spread. We have not been brought forward any information that a suicide has taken place: Mohali DC Amit Talwar#chandigarhuniversity pic.twitter.com/J0CUd5Bthf

SSP Vivek Soni denied any incident of death, injury or attempt to suicide in the aftermath of the video leak and said that only one girl fainted who was hospitalised and is now stable.

Punjab Additional Director General of Police (ADGP) Gurpreet Deo also added, “Let us not sensationalise the issue. Many things are circulating on social media platforms like girls attempted suicide, which are not correct.”

Deo said even if any video was deleted from the accused’s phone, “there is a possibility to forensically recover them. But let us not base anything on presumptions and assumptions and go according to scientific evidence”.

The incident also led to many parents arriving on campus and taking their children home. A parent, speaking to The Quint, said that he had driven to Mohali from Delhi after he heard about the protests and his daughter called him in a state of panic.

Another parent, Kishan, who hails from Punjab’s Fazilka, had travelled for over five hours to take his daughter back home from the university’s Le Corbuiser hostel, where the protests had erupted, reported The Quint.

The row at the university prompted several reactions from politicians across the spectrum.
Aam Aadmi Party (AAP) chief Arvind Kejriwal on Sunday condemned the Chandigarh University video leak incident and assured the students that the culprits will be given the harshest punishment.

Others who expressed solidarity with the students were Shiv Sena MP Priyanka Chaturvedi and Congress leader Pawan Khera.

Shocked&saddened to hear of the #chandigarhuniversity case.I urge the government to take strictest action&come up with a strong framework to deter such crimes,it can play mental havoc in the lives of the young girls who were victims of this, hope they get all assistance possible.

All the eyes were fixed on a red LED light on the pavement, behind which people can be seen standing.