Amarinder Singh, 80, will begin a new chapter in his political life by officially joining the BJP today in the presence of president JP Nadda. Image Courtesy: @capt_Amarinder/Twitter

Never count out the Captain!

After a long stint with the Congress, Captain Amarinder Singh will begin a new political innings today at 4.30 pm, as he will join the Bharatiya Janata Party (BJP) in the presence of party president JP Nadda. The two-time former Punjab chief minister will also merge his newly-formed Punjab Lok Congress (PLC) with the saffron party.

As Singh begins a new chapter in his political journey, here’s a look at his journey so far — from an Army war veteran, to a Congress leader, then switching sides to the Shiromali Akali Dal, then re-joining the Grand Old Party to now with the BJP.

Captain Amarinder Singh was born in 1942 and hails from the Patiala royal family, one of the wealthiest and biggest landowners in Punjab.

Amarinder’s parents — Yadavindra Singh and Mohinder Kaur — had close ties to the Congress and were the first to enter politics from the royal family. Mohinder Kaur was first nominated to the Rajya Sabha in 1962 by then Prime Minister Jawaharlal Nehru.

She was and will always be my biggest inspiration and her teachings of kindness and compassion will always stay with me. pic.twitter.com/j07zgRxeNt

Amarinder’s father, Yadavindra Singh, fought the Punjab Assembly polls in 1967 from Dakala, a small town adjacent to Patiala that also housed their family house Moti Bagh. In the same year, his mother too was elected MP from the Patiala parliamentary constituency in the 1967 general elections.

However, Yadavindra didn’t take to politics and left for the Netherlands as an ambassador.

Amarinder, in the meantime, completed his education from Doon School and also completed his military training from the National Defence Academy (NDA) and the Indian Military Academy (IMA).

He joined the Indian Army in 1963 and was part of the Indo-Pakistan war of 1965, as part of the Sikh regiment. During the War, Amarinder Singh was the ADC to the then GOC-in-C Western Command, Lt Gen Harbaksh Singh.

In 1969, he left the ‘fauj’ — his father and grandfather were also in army and many times he said that “Army will always be my first love”.

It is said that Amarinder Singh is a standout literary mind — he has authored a few books on war and Sikh history such as A Ridge Too Far, Lest We Forget, The Last Sunset: Rise and Fall of Lahore Durbar, The Sikhs in Britain: 150 years of Photographs, Honour and Fidelity: India’s Military Contribution to the Great War 1914 to 1918 and The Monsoon War: Young Officers Reminisce – 1965 India-Pakistan War.

He is also known to for his ability to prepare mouth-watering delicacies; in 2021, he hosted a lavish dinner for Punjab’s Olympic medal winners and gold medallist Neeraj Chopra at his Siswan farmhouse. On the menu was nothing short of a royal feast —Mutton Khara Pishori, Long Ellachi Chicken, Aloo Korma, Dal Masri, Murg Korma, Dugani Biryani and Zarda Rice (Sweet Dish).

CM @capt_amarinder is giving the final touches to his finger-licking delicacies, of which Punjab’s #Olympic medallists & @Neeraj_chopra1 will get a taste in a short while from now. pic.twitter.com/YMtSFDd4T5

Captain Amarinder is also known to be an avid gardener.

From war veteran to politician

Fifteen years later, he joined the Congress under Rajiv Gandhi who was his friend from school and entered the Lok Sabha after having won the Patiala seat.

He, however, parted ways with the Congress over the turbulence sparked by the 1984 Operation Blue Star at the Sikhs’ holiest site, the Golden Temple. He joined the Shiromani Akali Dal (SAD) and was made a minister in Surjit Singh Barnala’s government in September 1985.

When the police raided Darbar Sahib on Barnala’s orders, he resigned from the ministry seven months later in protest. The Sikhs admired him because of this.

After some time, he formed his own party, the Shiromani Akali Dal (Panthic) and won three seats in the 1992 Assembly polls, including his own in Samana near Patiala that went uncontested as the Parkash Singh Badal-led SAD did not fight these elections.

Later, Amarinder merged his party with the Badals but he fell out with the Akali Dal and rejoined the Congress after Badal denied him a ticket in the 1997 Assembly elections.

In 1999, he was appointed as the chief of Punjab Congress. Amarinder Singh finally became the chief minister of Punjab in 2002 after he led the Congress party to victory in the Assembly elections.

The Wire reports that in his first term, Captain Amarinder made life miserable for the Badal family after opening several vigilance inquiries against them. He rose to prominence after he revoked the water-sharing agreement with neighbouring Haryana.

In 2014, he took on BJP veteran Arun Jaitley in the general elections and defeated him by a margin of more than 102,000 votes from the prestigious Amritsar parliamentary constituency. He also managed to take over the party state presidentship from Partap Singh Bajwa. 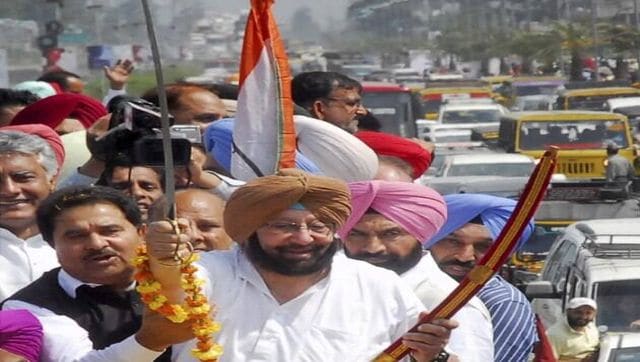 In 2014, Amarinder Singh took on BJP's Arun Jaitley in the general elections and won. PTI

In 2017, he steered the Congress to a stunning victory in Punjab and earned the position of chief minister once again. In his first year as chief minister during the second tenure, he was hailed for his implacable opposition to Khalistani elements in the state and abroad; he refused to meet Canadian defence minister Harjit Sajjan when he came to India, sending a strong message to Canada opposing its tacit support to Sikh extremists there.

He was also praised for being fairly successful in dealing with rampant drug addiction in Punjab.

However, during his second tenure as chief minister he came into conflict with a faction of the Congress headed by Navjot Singh Sidhu. He was also criticised for being inaccessible to Congress MLAs.

In September 2021, the Captain resigned from his post of chief minister after he felt “cornered and humiliated”.

He then quit the party in November and in his resignation letter to Congress chief Sonia Gandhi wrote, “A midnight conspiracy carried out against me at your and your children’s behest. Sidhu is a person of unstable mind and you will one day regret this decision and it would be too late by then.”

I have today sent my resignation to @INCIndia President Ms Sonia Gandhi ji, listing my reasons for the resignation.

‘Punjab Lok Congress’ is the name of the new party. The registration is pending approval with the @ECISVEEP. The party symbol will be approved later. pic.twitter.com/Ha7f5HKouq

The rise of Punjab Lok Congress

A month after quitting the Congress, Captain Amarinder launched his own party, Punjab Lok Congress in the run-up to the Punjab Assembly polls.

He also announced an alliance with the BJP. However, the party didn’t secure a single vote in the polls and Amarinder Singh too faced a humiliating defeat from Aam Aadmi Party’s greenhorn Ajit Pal Kohli with over 13,000 votes from his stronghold Patiala (Urban).

Now, after returning from London following spinal surgery, the Captain will merge his party with the BJP today and it has been reported and that eight leaders from the party — seven former MLAs and 1 MP — will also join the BJP.

It is left to be seen if the Captain’s merger with the BJP will be a success, but it goes to show that nothing is permanent in politics.