Why Brazilians are giving up on their famous yellow football jerseys

The ‘canarinho jersey’, a symbol of national pride in Brazil, has been worn by legends such as Pele, Ronaldo, Rivaldo, Neymar and Roberto Carlos. But with President Jair Bolsonaro’s right-wing supporters donning it, some fans have stopped wearing it altogether

Even those who do not follow football closely are familiar with the iconic yellow jerseys of Brazil’s national team.

Known as the “canarinho jersey”, it has been worn by legends such as Pele, Ronaldo, Rivaldo, Neymar and Roberto Carlos among many, many others and is a symbol of national pride for the countless football fanatics of the country.

But now, with the elections in Brazil fast-approaching, some are abandoning the “canarinho jersey” due to its association with the controversial President Jair Bolsonaro and his right-wing supporters.

It was designed in 1953,  three years after Brazil went down to Uruguay in the World Cup final in Rio de Janerio, as per WION.

Brazil’s white and blue jersey was derided as unlucky after their home defeat.

The Brazil football federation and newspaper Correio da Manha held a design contest to find Brazil’s new national kit. Aldyr Garcia Schlee, all of 19, emerged the victor out of 300 entries.

But it was only in 1970 in Mexico that fans, watching in colour, began to associate the yellow jersey with their team, as per The Spectator.

It was in 2018 that some fans first began abandoning the jersey after Bolsonaro supporters took to wearing it ahead of the polls. 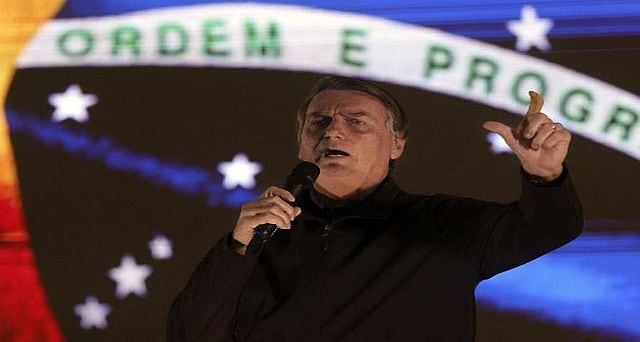 Jair Bolsonaro was elected as Brazil’s president in 2018 and has been dubbed as the the ‘Trump of the Tropics’. AFP

Now, with Bolsonaro trailing former president Luiz Inácio Lula da Silva in opinion polls and fighting for his political life, his supporters have yet again taken to wearing it.

Earlier in September, Bolsonaro attempted to give his flagging campaign a boost with a show of strength on Brazil’s most famous beach on its 200th anniversary of independence.

Tens of thousands of his supporters, many clad in their yellow jerseys, turned up.

Marcelo Cunha, an 85-year-old lawyer, surveying the scenes around him, told The Guardian, “The polls indicate Lula’s going to win [but] I don’t believe them. I can’t believe it seeing all this.”

The leftist da Silva, who governed from 2003 to 2010, is hoping to win 50 per cent of the votes 2 October and avoid a run-off against the incumbent.

Experts warn Bolsonaro, who has been often labelled the Trump of the tropics, is laying the groundwork to deny an impending defeat.

“It’s an attempt to deny what the polls are showing and to pre-emptively deny the election result in case he loses,” Bruno Boghossian, a political commentator for the Folha de São Paulo newspaper, told The Guardian. “The clear subtext of this is that he has more support than Lula.”

Higor Ramalho, a football fanatic, told Al Jazeera he last put on the T-shirt in June 2018.

“Wearing the yellow jersey was a moment of pride for me,” the 33-year-old said. “It was a symbol of Bravictory. I used to wear it not only while watching matches but also on regular days. Now, I have stopped wearing it for political reasons. The current president, along with his supporters, turned the yellow jersey into a political campaign and a symbol of their political party.

“And as I don’t support their political ideas, I refuse to be mistaken as one of them.”

The Spectator quoted a poll by Ibmec university showing one-in-five Brazilians would not wear the shirt for political reasons.

‘Independent of our differences off the field, it’s time to remember what the original shirt means,’ veteran commentator Galvão Bueno said in a beer commercial playing on TVs this month. ‘It belongs to you, to me, to the whole support.’

But a former ex-Brazil national team member isn’t so sure of that.

Walter Casagrande, who scored a goal wearing the yellow jersey in 1985, told CNN Sport the jersey was a “magical thing.”

“Like an enchanted object that gave me huge emotion,” he added.

“Now, I consider the Brazilian yellow jersey to have been kidnapped and appropriated by the right-wing, so we cannot use it. Brazil is appearing horribly to the world right now. It’s the first time in my life I’m seeing the yellow jersey being used against democracy and freedom.”