Storm surge a concern as Hurricane Ian batters Florida: Why is it so deadly?

A storm surge is an ‘abnormal rise of water generated by a storm’. As it gets closer to the coast, water gets pushed to the shore and piles up. Experts call it the most dangerous and destructive part of coastal flooding

A displaced boat sits beside the roadway in the southeast corner of Cape Coral on Wednesday night, Sept. 28, 2022, as the winds of Hurricane Ian continue to strike the flood-soaked streets. (Douglas R. Clifford/Tampa Bay Times via AP)

Hurricane Ian, one of the strongest hurricanes to ever hit the United States, has left Florida battered and bruised.

People have been trapped in their flooded home and millions left in the dark, after Ian, a Category 4 hurricane at landfall and the fifth-strongest when measured by wind speed to ever hit the US, slammed into southwest Florida.

The storm was about 90 kilometres southwest of Orlando with maximum sustained winds 120 kmph at 2 am. Thursday, the Miami-based hurricane center said.

Streets were turned into rivers and trees knocked down by Ian’s 241 kmph winds, pushing a wall of storm surge.

In Port Charlotte, along Florida’s Gulf Coast, the storm surge flooded a lower-level emergency room in a hospital even as fierce winds ripped away part of the roof from its intensive care unit, according to a doctor who works there.

The Federal Emergency Management Agency has warned that the storm surge is expected to cause “life-threatening storm surge and widespread flooding.”

But what is storm surge? Why is it so deadly?

The National Hurricane Centre (NHC) defines storm surge as “an abnormal rise of water generated by a storm.” As the storm gets closer to the coast, water gets pushed to the shore and “piles up” – hence creating a surge.

As per the website, if a storm surge coincides with high tide, it increases water levels even further.

Storm surge and rainfall both contribute to flooding during a hurricane, as per the NHC.

The NHC calls storm surge a ‘very complex phenomenon’ because it is sensitive to the slightest changes in:

Why is it so deadly?

The FEMA website calls storm surge the ‘most dangerous and destructive part’ of coastal flooding.

“It can turn a peaceful waterfront into a rushing wall of water that floods homes, erodes beaches and damages roadways,” the website warns.

The NHC considers a storm surge of three feet life-threatening.

The NHC on Wednesday had increased Ian’s storm surge forecast to 12 to 18 feet, something never before seen in the region, as per CNN.

Though Ian dropped in strength by late Wednesday to Category 1 with 144 kmph winds as it moved overland, all isn’t clear yet.

Storm surges as high as 6.5 feet were expected on the opposite side of the state, in northeast Florida, on Thursday. 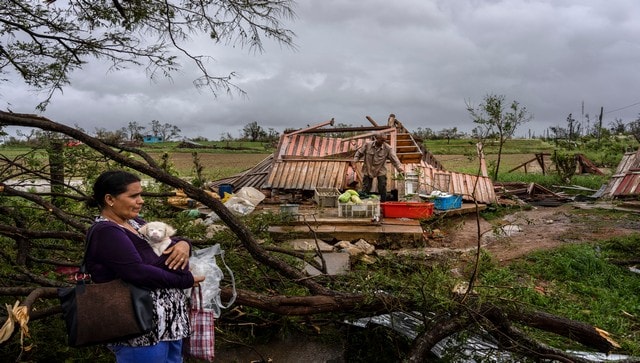 A woman waits for state transportation after her home was destroyed by Hurricane Ian. AP

Hurricane Katrina, among the worst storms in US history, generated a storm surge of 25 to 28 feet above the normal tide level along parts of the Mississippi coast and 10 to 20 feet above normal tide along the southeastern Louisiana coast, as per the NHC.

The outlet quoted Ken Graham, the director of the National Weather Service as saying at a press briefing Wednesday, “We have to talk about the water.”

“Ninety percent of your fatalities in these tropical systems comes from the water,” he added, saying that figure includes deaths from storm surge and rainfall flooding.

“Water levels are quite high in those areas still and so it will take some time for the water to recede,” Cody Fritz, storm surge specialist at the National Hurricane Center, told CNN.

“There’s still plenty of onshore flow along the coast keeping water levels elevated, so while the peak surge values will decrease here relative to previous value, I still expect waters to be up for a while and the need to maintain the storm surge warnings,” Fritz added.

The NHC warned that its Storm Surge Risk Maps “make it clear that storm surge is not just a beachfront problem, with the risk of storm surge extending many miles inland from the immediate coastline in some areas.”

While a storm surge can’t be prevented citizens can minimise damage to their homes and keep loved ones safe by securing doors and windows, sealing cracks and gaps, and getting flood insurance.