Central Vista Avenue, which runs from Vijay Chowk to India Gate, will be inaugurated by Prime Minister Narendra Modi on 8 September. From vending zones, lush greenery, to new amenity blocks, here’s all the transformed stretch has to offer

After being closed for 20 months, the revamped Central Vista Avenue in Delhi is all set to welcome visitors.

The three-kilometre avenue along the Rajpath, which runs from Vijay Chowk to India Gate, will be inaugurated by Prime Minister Narendra Modi on 8 September under the Central Vista redevelopment project.

What will the refurbished avenue offer visitors? What restrictions will the public have to abide by?

Here’s what you need to know before visiting:

The transformed stretch has plenty to boast about from vending zones and lush greenery to new amenity blocks.

As per Indian Express, the Central Vista will comprise eight vending plazas where vendors including ice cream sellers can operate. Earlier, ice-cream carts were spread across Rajpath in the evening.

“Ice cream carts will only be allowed in the vending zones. Although we have not taken any decision, we will ensure that these ice cream trolleys are not allowed along roads,” a senior official was quoted as saying by PTI. 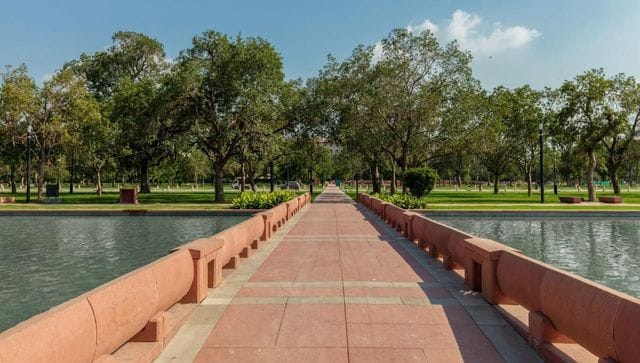 The area along the Rajpath spanning 3.90 lakh square metre has been redeveloped. News18

Vendors will not be permitted to sell their items on the lawns between C-Hexagon and Man Singh Road, as per Hindustan Times (HT).

On the inauguration day, the public will not be permitted from the India Gate to Man Singh Road, but the rest of the area remains open.

From 9 September, the entire stretch will be open for visitors.

Meanwhile, two blocks on each side of India Gate will have eight shops each which will boast of street food from 16 states, selected by Delhi Tourism, as per The Hindu.

The Central Public Works Department (CPWD), an executing agency of the project, has built six new parking spaces to accommodate 1,117 cars and 40 buses on either side of Rajpath.

“Parking will be free for the first 1-2 months. We have asked the New Delhi Municipal Council to manage the parking lots. Initially, parking space for 700 vehicles will be opened to the public due to ongoing construction work at common central secretariat buildings,” an official of the Union housing and urban affairs ministry official told HT.

Two other facilities at C-hexagon have been constructed where 16 shops will be given to artisans or state emporiums to showcase their work.

As per The Hindu, visitors will not be allowed to picnic on the lawns falling in the stretch from India Gate to Man Singh Road. No more picnics on the stretch from India Gate to Man Singh Road. News18

Boating will be allowed in only two canals– one behind Krishi Bhawan and the other near Vanjiya Bhawan, as per PTI.

Focus on greenery and amenities

The area along the Rajpath spanning 3.90 lakh square metre has been redeveloped with a focus on greenery.

Among other amenities, more than 400 benches, over 900 new light poles, eight blocks with toilets (64 for women, 32 for men and 10 for the differently-abled) and drinking water facilities have been set up, as per Indian Express. New red granite walkways have been constructed along the Rajpath. News18

Concrete bollards have been replaced with over 1,000 white and red sandstone bollards to enhance the historic look of the avenue.

In addition to four pedestrian underpasses, 15-km long new red granite walkways have been constructed along the Rajpath and on the lawns. The repaired lawns on both sides of the canals have been joined with bridges.

“We have constructed close to 16.6 km of walkways on this stretch, and other essential facilities, which were missing earlier,” a ministry official told HT.

“The bridges constructed over the canals will provide smooth access to the parking area,” the official added.

As per an official of the housing and urban affairs ministry, there would be a heavy deployment of police personnel and security guards to evade theft or vandalisation attempts.

Moreover, 300 CCTV cameras have been placed at the avenue for 24×7 surveillance, HT reported.

Expecting a large number of people to visit Rajpath, considered the most popular public space in Delhi, officials have accepted that maintaining cleanliness will be one of the challenges.

“We appeal to people to maintain cleanliness. Large teams of sanitation workers will be deployed,” an official told PTI.