Ukraine’s counter-offensive has taken Russian forces by surprise and pushed them out of the Kharkiv region.

The loss of Izium, a strategically-vital location and a major support base for Russian forces for the past six months could hit Vladimir Putin’s plans badly and signal a major change in the war.

Let’s take a look at Ukraine Izium victory, what it could mean and how the Russians are responding:

CNN reported that when Ukrainian forces entered the city of Izium on Saturday, it was more than a significant military victory. It was a sign that the Russian troops are scrambling to hold onto the territory they captured over the past six months.

“Russians escaped and left weapons and ammo behind. The city centre is free,” a spokesperson for the Bohun Brigade of the Land Forces of Ukraine said in a statement Saturday afternoon.

As per CNN, Ukraine pressed its advantage by opening up a new front against Russian defences in Donetsk and Luhansk.

Serhiy Hayday,  head of the regional military administration for Luhansk, told CNN the city of Lysychansk was the target of the new offensive.

Lysychansk was the last city in the Luhansk region in eastern Ukraine to fall under Russian control in July, after weeks of intense fighting. Hayday told CNN on Saturday “the occupiers, including both the collaborators and the military, are running away in a hurry.” 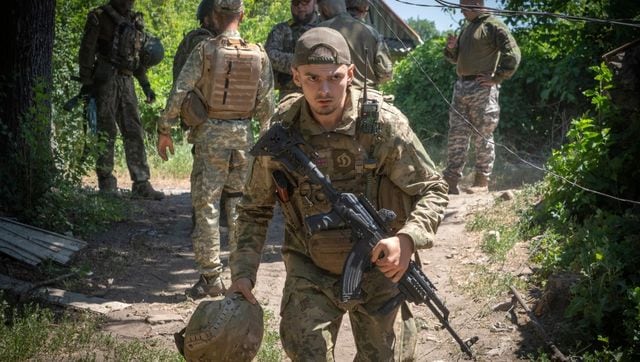 “Locals have videos and photos proving that,” Hayday was quoted as saying, adding that visual evidence could not be shared for security reasons.

“The Russian army in these days is demonstrating the best that it can do — showing its back. And, of course, it’s a good decision for them to run,” said an upbeat President Volodymyr Zelenskyy in a video on Saturday, as per Outlook.

This comes after Ukrainian forces earlier this week liberated Balakliya town after seven months of Russian occupation, as per Outlook. Videos surfaced on the internet showing Ukrainian people hailing their soldiers who had driven the Russians out.

“The town of Balakliya, Kharkiv region, is liberated by Ukrainian troops! The Commander of Ukrainian Land Forces, Hero of Ukraine, Colonel General Oleksandr Syrskyi is leading the Ukrainian  offensive in this sector. The Ukrainian flag has been raised in the town centre,” said Ukraine’s ministry of defence tweeted Friday.

It said that while Russia has “likely withdrawn units from the area,” fighting continues “around the strategically important cities of Kupiansk and Izium.”

Oleksiy Reznikov, the Ukrainian defence minister, said that Ukraine’s allies are “amazed” by the recent successes of the country’s military. Speaking at the end of a meeting of the Ukraine Defense Contact Group in Ramstein Air Base, Germany, Reznikov said Ukraine’s “partners were positively amazed by the dynamics of our troops’ activities” in the south and east of the country.

Sunday’s address marked 200 days since the beginning of Russia’s invasion.

The speed of Ukraine’s fightback has apparently caught Russia’s military off-guard, bringing swathes of territory Moscow had controlled for months back into Kyiv’s fold.

Images posted by the Ukrainian military showed crates of munitions and military hardware scattered across territory abandoned by Russian forces.

In his evening address Sunday Zelensky praised the soldiers who had “liberated hundreds of our cities and villages… and most recently Balakliya, Izium and Kupiansk”.

As per DW, Natalia Popova, adviser to the head of the Kharkiv regional council, shared photos on Facebook of troops in front of Kupiansk city hall with a message: “Kupiansk is Ukraine. Glory to the Armed Forces of Ukraine”. Around Balakliya, one of the first towns to be retaken by Ukrainian troops, AFP journalists saw evidence of fierce battles, with buildings destroyed or damaged and streets mostly deserted.

Earlier Sunday, the head of the Ukrainian military announced that as much as 3,000 square kilometres (1,158 square miles) had been wrested from Russia since the offensive began at the beginning of this month.

The country’s foreign minister used the momentum to appeal to Western allies for more stockpiles of sophisticated weapons.

“Weapons, weapons, weapons have been on our agenda since spring. I am grateful to partners who have answered our call: Ukraine’s battlefield successes are our shared ones,” Dmytro Kuleba said.

Moscow conceded having lost territory, and experts have said the confirmed recaptured by Ukraine of the city would represent a serious blow to Moscow’s military ambitions in east Ukraine.

Western military experts told DW these developments could be a sign of turning tides and essentially mean the disruption of the Russian supply lines to the east.

“We see success in Kherson now, we see some success in Kharkiv and so that is very, very encouraging,” US defence secretary Lloyd Austin said in Prague, as per DW.

“Russian forces were likely taken by surprise. The sector was only lightly held and Ukrainian units have captured or surrounded several towns,” the UK defence ministry tweeted.

The reaction in Moscow to the Ukrainian gains so far has been muted, but on Sunday a military map presented by the Russian defence ministry showed that its forces had made a major withdrawal from the Kharkiv region.

Vitaly Ganchev, the local administration backed by Russia, claimed the regime was trying to evacuate civilians from cities including Izium, as per DW.

Russia controlled just a sliver of territory in the region’s east, behind the Oskil river, the revised map showed.

Russia’s military made the surprise announcement Saturday that it was “regrouping” its forces from Kharkiv to the Donetsk region just south to focus its military efforts there.

That came shortly after Moscow said it was actually sending reinforcements towards Kharkiv.

The fresh fighting in and around the Zaporizhzhia plant has sharpened fears of another nuclear incident comparable to the Chernobyl disaster in northern Ukraine in 1986.

Putin, in a telephone call with French President Emmanuel Macron, once again accused Ukraine of repeated attacks on the facility held by Russian troops. The Russian leader drew attention to “regular Ukrainian attacks”  which could have “catastrophic consequences”, the Kremlin said in a statement.

Each side has repeatedly blamed the other for shelling in the area.

Macron’s office, in its summary of the conversation, said he had told Putin “the Russian occupation was the reason for the risks” facing the atomic power station.

In Balakliya, 52-year-old Iryna Stepanenko was outside cycling for the first time in months.

She had hidden in her basement for three months, she said, from the town that was home to about 27,000 people before the invasion.

But while she was relieved that Kyiv’s forces were back, she still feared for the future.

There was “a total blackout in the Kharkiv and Donetsk regions, a partial one in the Zaporizhzhia, Dnipropetrovsk and Sumy regions”, Zelensky said in his daily address on Sunday.

Power was quickly restored in most places.

In the Kharkiv region 80 per cent of the water and electricity supply had been restored on Monday morning, according to the deputy head of the president’s office, Kyrylo Tymoshenko.

“A total blackout in the Kharkiv and Donetsk regions, a partial one in the Zaporizhzhia, Dnipropetrovsk and Sumy regions,” Zelensky said in a statement on social media. Ukrainian Emergency Ministry rescuers attend an exercise in the city of Zaporizhzhia. Ukraine remains deeply scarred by the 1986 Chernobyl nuclear catastrophe, when a Soviet-era reactor exploded and streamed radiation into the atmosphere in the country’s north. AFP

“No military facilities,” he added. “The goal is to deprive people of light and heat.”

Local Ukrainian authorities pointed to Russian strikes on their power infrastructure. Some districts reported later that power had been restored.

In Kharkiv region, a Russian strike on a power station killed one employee, Governor Oleg Synegubov said. He added that power had been partially brought back.

The Russian strikes hit 15 locations on Sunday, from Kramatorsk in the east to Mykolaiv in the south and Dnipro in between, Ukraine’s military said.

The blackouts hit regions with an estimated combined population of nine million people — including territory controlled by Russia.

They came as Ukrainian forces claimed to have recaptured dozens of towns and villages in eastern Ukraine.

Ukraine had already lost all power from the Russian-controlled Zaporizhzhia nuclear plant.

The country’s nuclear energy agency said the final reactor at the plant, Europe’s largest nuclear power station and a focal point of the conflict, had been shut off as a safety measure.

Putin warned that Ukrainian attacks near the station could have “catastrophic consequences”.

Ukraine battles to reconnect millions in the cold and dark