Explained: How India’s new naval ensign is an attempt to ‘shed its colonial past’

The Indian Navy will get a new naval ensign on 2 September when it commissions the first indigenous aircraft carrier Vikrant. This will be the fourth time that the ensign will change since 1950

Friday, 2 September will be a momentous occasion for the Indian Navy for two reasons. The country’s first indigenous aircraft carrier Vikrant will be commissioned and the naval force will get a new ensign, which as the Prime Minister’s Office stated “would do “away with the colonial past… befitting the rich Indian maritime heritage”.

It has been reported that Prime Minister Narendra Modi will commission INS Vikrant at Cochin Shipyard Limited in Kochi and during the event, he will also “unveil the new Naval Ensign (Nishaan), doing away with the colonial past”.

We take a closer look at what a naval ensign means, what changes has the Indian Naval ensign seen and why India is choosing to change the ensign now.

What is a naval ensign?

Simply put, a naval ensign is the flag that is hoisted atop all naval installations, including naval warships, ground stations and naval air bases.

Each country’s navy has its own ensign; the US Navy’s ensign is the same as the national flag, but many other navies have distinctive naval ensigns which are “worn” by their war vessels.

The Indian Navy draws its origin to the colonial period. According to the Indian Navy website, on 2 October 1934, the naval service was renamed Royal Indian Navy with its headquarters at Bombay (now Mumbai).

When India became a Republic in 1950, the prefix ‘Royal’ was dropped and it was rechristened as the Indian Navy.

The current ensign of the Indian Navy is a white flag with horizontal and vertical red stripes, symbolising the Cross of Saint George, with the emblem of India superimposed on the intersection. The tricolour is placed in the upper canton next to the staff.

However, this has not always been the case. As per reported information, this is the fourth time since 1950 that the Naval Ensign would undergo a change. However, this wasn’t the only change that the ensign underwent. In 2001, the Indian Navy decided to change the ensign replacing the Cross of St. George with the naval badge, an anchor within a frame surmounted by the state emblem, the Sarnath Lion Capital. 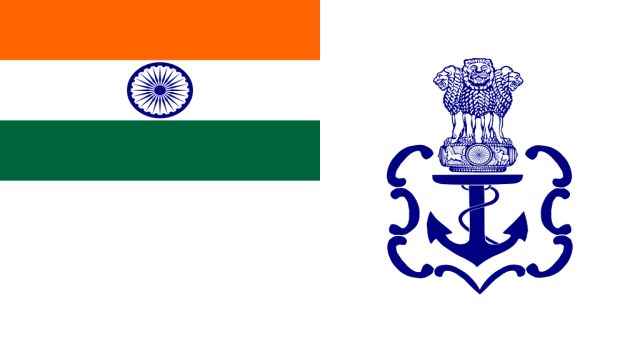 The naval ensign in 2001 when it did away with the Cross of St. George. Image Courtesy: Indian Navy website

However, in 2004, the ensign was again changed back to the red Cross of St. George as there were complaints that the new flag was indistinguishable because the blue of the navy crest merged with the skies and the sea. A change was made in the flag and the Cross of St. George now had the state emblem derived from the Lion capital of Ashoka in the middle.

In 2014, the ensign was updated to include the national motto “Satyameva Jayate” in the Devanagari script. 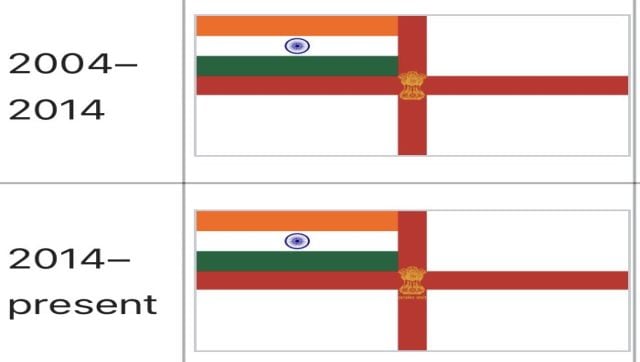 The design of the new naval ensign hasn’t been revealed as of now, but sources within the establishment have been reported as saying that the cross will go. Additionally, the naval crest depicting an anchor would be added besides certain colour changes.

Why the change now?

The change in the naval ensign is a nod towards the county’s move towards ‘Atmanirbharta’.

It has been reported that the issue is so close to the prime minister’s heart that during this year’s Independence Day speech, he set out “an India free of colonial mindset” as one of the Panch Pran for New India in Amrit Kaal.

In the recent times, Prime Minister Modi has taken several steps in this direction — from repealing almost 1,500 old and obsolete laws to unveiling unveiled a hologram statue of Netaji Subhas Chandra Bose at India Gate. The hologram is to be later replaced with the statue of Netaji. This is being done at the canopy where a statue of King George V had stood till its removal in 1968.

India not the only to drop the Cross of St. George

Canada transformed their naval ensign in 2013, while Australia changed theirs in 1967. The New Zealand navy also did away with the George’s Cross in 1968.

Rail services resume on Ahmedabad-Udaipur track a day after explosion

The newly-inaugurated Udaipur-Ahmedabad broad gauge railway track, a portion of which developed cracks after an explosion, was repaired by the railway engineers, officials said on Monday