Addressing the media, the former Congress veteran expressed gratitude to Prime Minister Narendra Modi, Union home minister Amit Shah and BJP president Jagat Prakash Nadda, saying it was now time to join a party that is “looking after the interests of the country”, ANI reported.

Earlier in the day, Amarinder, an army veteran, had met Nadda in Delhi before joining the BJP.

He will join BJP in Delhi today. pic.twitter.com/kBXdIj42JY

With Amarinder’s entry into the saffron party, experts believe the BJP has gained a major Sikh face which will be advantageous for the party in Punjab.

Amarinder’s entry amid AAP vs BJP tussle in Punjab

Amarinder’s new innings with the BJP comes amid the ruling Aam Aadmi Party (AAP) government accussing  the saffron party of poaching its MLAs.

Punjab chief minister Bhagwant Mann has called a special session of the state Assembly on 22 September to prove his government’s majority on the floor.

Last week, several AAP lawmakers had filed a police complaint against the BJP accusing the party of making bids to topple the Mann-led government by offering money to its MLAs and “threatening” them under Operation Lotus”, as per NDTV.

The Maharaja of Patiala has called the AAP’s allegations against the BJP “unnecessary noises just to divert attention”, reports Indian Express.

Amarinder has now joined the list of his former Congress colleagues such as Sunil Kumar Jakhar, Balbir Sidhu, Gurpreet Kangar, Raj Kumar Verka and Sundar Sham Arora who left the grand old party for BJP after its humiliating defeat in the Punjab Assembly elections earlier this year.

AAP had registered a landslide victory in the polls by bagging 92 of the 117 Assembly seats, while Congress had dropped to 18.

Amarinder’s Punjab Lok Congress which had allied with the BJP during the polls drew a blank, and the saffron party managed to win in only two constituencies. Captain had also lost his own bastion – Patiala.

As per The Quint, with Amarinder’s entry, the BJP can become the main Opposition to AAP in Punjab.

If the Shiromani Akali Dal further weakens, the BJP can effectively move a step closer to reducing Congress’ space in state politics.

Amarinder had to resign from the Punjab chief minister’s post last year and had an unceremonious exit from Congress merely six months ahead of the Assembly polls. He had formed PLC after leaving the grand old party.

As per Quint sources, the PLC’s merger with the BJP was always on the horizon and the party was “a temporary measure”.

For BJP, Amarinder is a strong Sikh face who would also be “acceptable” to the Hindu constituency in Punjab, notes Indian Express.

Former Union law minister and senior Punjab leader Ashwani Kumar said he believes the BJP will get a “boost” in the state with Amarinder’s entry.

“BJP will be strong in Punjab because of the image of Captain Amarinder Singh as a nationalist secular Sikh leader. Hindu people also like him so how does strong support turn into a vote only time will tell but its effect will be in Punjab and it will strengthen the BJP,” Kumar told ANI.

Further, he predicted that with the Captain’s arrival, many Congress leaders were also likely to leave the Congress and join the BJP ahead of the 2024 Lok Sabha elections.

“I think the nationalist forces will get a substantial boost in Punjab. This will have an effect on the 2024 General elections and it is also possible that before the 2024 elections, many leaders of the Congress party may go to the BJP because workers or those who are second-tier leaders, stay in the same party where strong leaders are,” the former Union minister was quoted as saying by ANI.

BJP and Amarinder a match

Even when he was with the Congress, Amarinder has sided with the BJP on many issues.

Amarinder, who enjoys a good rapport with Narendra Modi, also aligns with the saffron party’s ideology and views on most nationalistic issues, notes Indian Express. 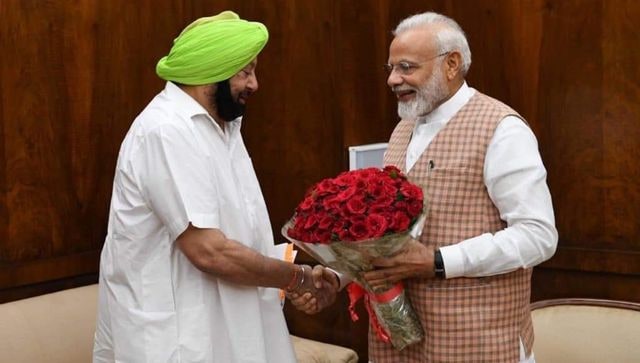 While other states opposed the Centre’s move of increasing the physical jurisdiction of the Border Security Force (BSF), Amarinder was among the few leaders who supported its extension on the Punjab border.

According to Quint, 80-year-old Amarinder may be given a gubernatorial role or some other important position by the BJP.

With his BJP entry, he has also secured the political future of his family, especially his daughter Jai Inder Kaur and son Raninder Singh, as per The Quint.