Accident or sabotage? Why are the Russia-Europe Nord Stream pipelines leaking?

The gas leaks in Nord Stream 1 and 2 bring more bad news for Europe, which is already reeling under an energy crisis. While the environmental impact appears limited thus far, experts warn that could change

A large disturbance in the sea can be observed off the coast of the Danish island of Bornholm Tuesday, following a series of unusual leaks on two natural gas pipelines running from Russia under the Baltic Sea to Germany.Danish Defence Command via AP

The massive, unexpected leaks from the Nord Stream 1 and 2 pipelines have left some wondering what went wrong and others suspecting sabotage.

The developments come in the backdrop of the pipelines being at the centre of geopolitical tensions in recent months after Russia cut gas supplies to Europe in suspected retaliation against Western sanctions following its invasion of Ukraine.

Built in parallel to the Nord Stream 1 pipeline, Nord Stream 2 was intended to double the capacity for Russian gas imports to Germany. But Berlin blocked newly-completed Nord Stream 2 in the days before the war.

Russian energy giant Gazprom progressively reduced the volumes of gas being delivered via Nord Stream 1 until it shut the pipeline completely at the end of August, blaming Western sanctions for the delay of necessary repairs to the pipeline.

Let’s take a closer look at what happened and the possible the impact:

What caused the leak?

No one is certain.

Photos taken by the Danish military showed large areas of bubbles on the surface of the water, emanating from the three leaks in Sweden and Denmark’s economic zones north of Poland, from 200 to 1,000 metres in diameter.

🚨ALERT🚨 Danish Ministry of Defense issued statement that it’s F-16 interceptor response unit initially discovered the Nord Stream leaks & has released the below dramatic video of the impact of gas release on the surface of the Baltic Sea near Bornholm:pic.twitter.com/R39lL1ErtN

Two “massive releases of energy” were recorded by the Swedish National Seismic Network shortly before the gas leaks near their locations off the coast of the Danish island of Bornholm, Uppsala University seismologist Peter Schmidt told AFP.

“With energy releases this big there isn’t much else than a blast that could cause it,” he added.

Two Danish military vessels have been dispatched to the area, while Sweden’s government called an emergency meeting on Tuesday.

“Authorities have now been informed that there have been another two leaks on Nord Stream 1, which likewise is not in operation but contains gas,” Danish climate and energy minister Dan Jorgensen told AFP in a statement on Tuesday.

A Nord Stream spokesperson told AFP that they had not been able to assess the damage but conceded that “an incident where three pipes experience difficulties at the same time on the same day is not common.”

As a result of the leaks, navigational warnings have been issued for a distance of five nautical miles and a flight height of 1,000 metres (3,280 feet).

As per Financial Express, other possible causes including technical malfunctions and lack of maintenance have been ruled out. Evidence shows the damage at the seismic level certainly did not take place due to natural occurrences or material fatigue and local seismologists reported that explosions sent ripples in the Baltic Sea, as per the report.

The newspaper quoted Danish Ambassador Freddy Svane as saying: “The gas leaks were caused by two carefully timed explosions, but added that “Danish authorities do not currently have a basis for attribution.”

What’s the economic and environmental impact? This satellite photo from Planet Labs PBC shows a large disturbance in the sea can be observed off the coast of the Danish island of Bornholm, Monday Sept. 26, 2022 following a series of unusual leaks on two natural gas pipelines running from Russia under the Baltic Sea to Germany. AP

“Depending on the scale of the damage, the leaks could even mean a permanent closure of both lines,” Eurasia Group analysts Henning Gloystein and Jason Bush were quoted as saying by Al Jazeera.

Copenhagen expects the leaks at the pipelines, which are full of gas but not operational, to last “at least a week” — until the methane escaping from the underwater pipes runs out.

The leak would only affect the environment in the area in which the gas plume in the water column is located, and the escape of the greenhouse gas methane would have a damaging impact on the climate, the Al Jazeera report said.

The pipelines, which are operated by a consortium majority-owned by Russian gas giant Gazprom, are not currently in operation, however, they both still contain gas.

The leak would only affect the environment in the area in which the gas plume in the water column is located, and the escape of the greenhouse gas methane would have a damaging impact on the climate, the Al Jazeera report said.

As per Mint, most of the leaked gas would be absorbed by the water.

The leak would only affect the environment in the area in which the gas plume in the water column is located, and the escape of the greenhouse gas methane would have a damaging impact on the climate, the Al Jazeera report warned.

“Leaks of this size are a severe safety and environmental hazard, especially should Russia not stop pumping gas into the system,” the analysts warned.

Vessels could lose buoyancy if they enter the area, and there might be a risk of leaked gas igniting over the water and in the air, but there were no risks associated with the leak outside the exclusion zone, as per the report.

She threatened the “strongest possible response” to any deliberate disruption of European energy infrastructure. 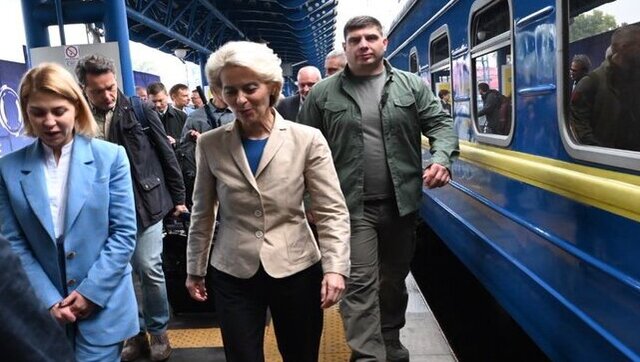 Danish prime minister Mette Frederiksen described them as “deliberate acts”, saying: “We are not talking about an accident”.

Polish prime minister Mateusz Morawiecki said the leaks were an act of sabotage that “probably marks the next step of escalation of the situation in Ukraine”.

And Sweden’s outgoing Prime Minister Magdalena Andersson said “there have been detonations”, although foreign minister Ann Linde said they would not “speculate on motives or actors”.

The United States was looking at reports that the leaks were “the result of an attack or some kind of sabotage,” Secretary of State Antony Blinken said. National Security Adviser Jake Sullivan said Washington “is supporting efforts to investigate and we will continue our work to safeguard Europe’s energy security”

Russia said it was “extremely concerned” about the leaks. Asked by reporters whether it could be an act of sabotage, Kremlin spokesman Dmitry Peskov said that at the moment “it is impossible to exclude any options”.

“It is too early to say anything about the causes of the incidents,” the Danish Ministry of Climate, Energy and Utilities said in a statement.

Denmark’s energy agency has, however, called for “higher levels of preparedness in the electricity and gas sector” in the country, Jorgensen said.

During a visit to Poland for the inauguration of the Baltic Pipe Project – connecting Poland and Denmark to a North Sea pipeline – Danish Prime Minister Mette Frederiksen also told Danish media “it’s hard to imagine that it’s accidental.”

The Danish energy agency told the Ritzau news agency that only the area where the gas plume is located will be affected by the leak, but methane escaping into the atmosphere has a “climate-damaging effect”.

“Gas pipeline leaks are extremely rare and we therefore see a reason to increase the level of preparedness following the incidents we have witnessed over the past 24 hours,” director of the Danish Energy Agency Kristoffer Bottzauw said in a statement.

The incidents on the two pipelines have no impact on the supply of gas to Denmark, the Danish energy minister said.

Neighbouring Norway, an oil producer, on Tuesday said it had “heightened emergency preparedness” related to the Norwegian Continental Shelf. “Some of the background are reports of increased drone activity,” a government statement said.

Germany, which has been highly dependent on imports of fossil fuels from Russia to meet its energy needs, has since come under acute stress as Moscow has dwindled supplies.

Germany has rebuffed Gazprom’s technical explanation for the cut, instead accusing Moscow of wielding energy as a weapon amid tensions over the war in Ukraine.

Meanwhile, German daily Tagesspiegel reported that “the Nord Stream pipelines may have been damaged by targeted attacks and leaked as a result”.

According to a source close to the government and relevant authorities, quoted in the newspaper, “everything speaks against a coincidence”.

“We cannot imagine a scenario that is not a targeted attack,” the source said.