While Yuzvendra posted a picture with the actor, Abhishek also posted it back on his social media, showing a kind gesture.

While mostly essaying the comic and fun-loving character’s on the screen, Abhishek Banerjee has presented a whole new shade of his acting spectacle in ‘Paatal Lok‘ as intense killer Hathoda Tyagi that has left a strong imprint of it on the audience’s heart. As his character from the series went on to create many examples of its success, its popularity is not just limited to the audience as now one of the Indian renowned cricketers, Yuzvendra Chahal also came across as a fan of his character.

Abhishek as Hathoda Tyagi is one such character that has left a profound memory in the audience’s mind. While the actor has left millions impressed with his character, the example of its popularity was witnessed when M.S. Dhoni‘s Tilli aka Yuzvendra Chahal posted a selfie on his social media with Hathoda Tyagi aka Abhishek Banerjee while they met during travel. The cricketer wrote the caption-

“FINALLY WITH HATHODA BHAIYA.” While Yuzvendra posted a picture with the actor, Abhishek also posted it back on his social media, showing a kind gesture. 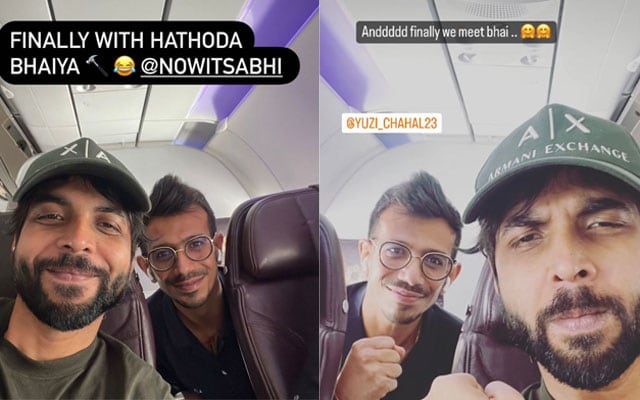 Moreover, it’s amazing to see both the gems of their own fields come together and enjoyed the company together.

On the work front, Abhishek will be seen in ‘Bhediya’, ‘Rana Naidu’, ‘Nazarandaaz‘, and many more.

Varun Dhawan and Kriti Sanon also shared a few spooky incidents which happened during the film’s shooting which were equally humorous and bewildering. The event started in the late evening and continued till night.

When Varun asked about Kriti’s first impression of him, she said  “You were a little bit of a flirt. Genuinely, I felt like you were very, very obviously high energy. Very talkative. Sweet, but flirty.”