In the ancient legends of King Vikramadithya and the Betaal (Vampire), the wise and valiant monarch would capture the latter, only to be told a story at the end of which was a riddle that Vikram had to crack each time. The Betaal – a clever fellow himself, well aware of the extent of his captor’s intelligence – agreed not to resist captivity if Vikram did not have the right answer; if the king knew the answer and did not reveal it, then his head would explode; and if he did respond correctly, then Betaal would and could escape.

This framing structure was used to narrate dozens of charming tales that remain prominent in Indian popular culture till date. In the final one, Betaal’s motivations were revealed. The 2017 Tamil blockbuster Vikram Vedha was a contemporary adaptation of Vikram and Betaal, with Vikram (R. Madhavan) written as a smart, incorruptible policeman on the trail of the dreaded gangster Vedha (Vijay Sethupathi), and the story told each time – to Vikram by Vedha – involved the latter’s own life.

Writer-directors Pushkar and Gayatri have remade their Tamil film in Hindi, with Saif Ali Khan as Vikram, a policeman in Lucknow, and Hrithik Roshan as Vedha. This Vikram Vedha is a near-photocopy of the Tamil original with some minor changes that are curious in what they reveal about the team’s assessment of the north Indian audience. For a start, Vedha’s name is Vedha Betal here, almost as if there was a worry that Hindi viewers would not get the point despite the animation add-on that leaves us in no doubt of the source material. Did the producers insist on this tweak or was it the directors’ call? Either way, it’s notable, noticeable and – unless the condescension bothers you – amusing.

The action in the Hindi film is set in Uttar Pradesh where Vedha Betal is a criminal so dangerous that the UP police sets up a special task force to capture him. The group includes Vikram and his dear friend Abbas (replacing Simon in the original, played here by Satyadeep Mishra) .

A bloody opening encounter between the police and Vedha’s gang introduces us to Vikram’s prowess in combat and his unscrupulousness within which is contained his dubious definition of honesty: he judges a human being on sight, and if he concludes that that person is a crook, he has no qualms about framing them for a crime they did not commit. This questionable understanding of morality apart, Vikram is ramrod straight. He cannot be bought or sold, he cannot be bribed, and he will not yield an inch in his work without justification, even if it means antagonising his lawyer wife Priya (Radhika Apte) when she is the opposing counsel in a case he is handling. Vikram will do everything in his power for what he views as the greater good.

Enter Hrithik Roshan a.k.a. Vedha Betal about half an hour into the narrative. And thence begins the saga of stories within the main story.

The lead stars of this Vikram Vedha have the pizzazz of the duo in the original (though I think Vijay Sethupathi pulled off Vedha’s casual coolth even better than Hrithik), the action is as neatly edited as the original, the sense of humour as strategically inserted to lighten the mood in the midst of grave moral dilemmas, cinematographer P.S. Vinod explores Lucknow’s visual wealth with a keen eye, the song Alcoholiya is thrust in as abruptly as the song in the same passage in the original, and the suspense is sustained till the climax…just like in the original. Since this remake has almost nothing new to offer, a viewer’s enjoyment of it depends greatly on whether or not they have seen the 2017 film. I have, and my experience of Hrithik and Saif’s sparring has been vastly diluted by my very clear memory of Vijay and Madhavan’s screen chemistry and the details of the mystery woven around them. 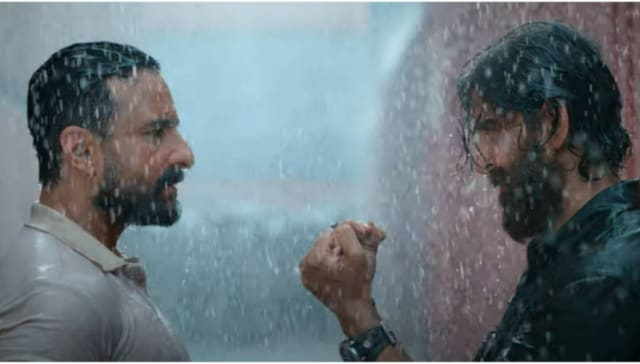 Hrithik and Saif are first-rate actors with swag that serves their characters well, and they play off each other nicely in Vikram Vedha. I also liked the use of songs from Raj Kapoor’s greatest works in the background score. And it was nice to see a wife in a Hindi film reminding her husband that her career is as important as his work. The equality in Vikram and Priya’s relationship is unusual for Hindi cinema. But through all this, I confess, I could not shake off the question of why Vikram Vedha needed to be remade in Hindi at all in an era when streaming has made it so much easier for us to access films across languages, and the Tamil Vikram Vedha with English subtitles is just a remote button away on Zee5.

More important, in the five years that have passed since 2017, Pushkar and Gayatri seem not to have deemed it fit to add nuances that would elevate their film above the original, and perhaps give us some food for thought.

Even classics when remade can be made special with small touches or even a complete re-envisioning. My favourite among recent examples abroad is Greta Gerwig’s excellent feminist reinterpretation of the heroine Jo March’s professional journey in the American novel Little Women. Here at home, Malayalam director Dileesh Pothan and writer Syam Pushkaran earned critical acclaim and audience attention with Joji, their pandemic-time revisitation of William Shakespeare’s Macbeth. There are so many examples from Hindi cinema itself, the most high-profile being Vishal Bhardwaj’s rendition of Shakespeare’s plays in the Indian socio-political context: Macbeth as Maqbool, Othello as Omkara and Hamlet as Haider. Vikram Vedha in 2017 did not underestimate the audience’s intellect despite being what industry wisdom considers a mass-targeted film. Vikram Vedha in 2022 is entertaining, but has nothing new to say. Except… Apart from naming the Hindi version’s lead character Vedha Betal to rub in our faces the fact that Vikram Vedha draws inspiration from Vikram-Betaal lore, there are a couple of other nips and tucks that are mystifying. The background score during fights in the original was throbbing and addictive. In the Hindi remake it is still pulsating but raised to a shrieking level. During a heated argument that Vikram has with Priya early in their relationship, she roughs him up in the Hindi version. Priya (Shraddha Srinath) in the Tamil film gesticulated furiously but did not touch Vikram. Later in the Hindi film, Vedha’s brother Shatak (Rohit Saraf) gets violent with his girlfriend (Yogita Bihani). It turns out that he was faking it for a fun reason, but what was the purpose, especially considering that Pulli in Tamil did not pretend-assault his lover in that scene?

And then there’s the choreography for the song Alcoholiya. In Tamil, we got Vedha, his mentor and an entire horde of men including members of their gang dancing wildly to Tasakku tasakku. In Hindi, a swarm of unidentified semi-clad, plastic-looking women have been added to the mix. The idea being?

So yes, Hrithik Roshan and Saif Ali Khan play off each other nicely in Vikram Vedha, but having watched the Tamil original, I wish this one had taken it a step forward.

Vikram Vedha is now in theatres