Solamante Theneechakal is a far cry from the best in Lal Jose’s filmography, but it is mildly entertaining and gives us a bunch of new actors worth watching out for.

Those who follow Jewish and Christian lore will be familiar with tales of King Solomon’s great wisdom. Lal Jose’s new film is named after the humble honeybee that is said to have helped the legendary monarch distinguish between real flowers versus fake ones that the feisty Queen of Sheba once gifted him.

The Solomon in Solamante Theneechakal (Solomon’s Honeybees) is a policeman played by Joju George who is probing a murder that, unknown to the force, is linked to fellow police personnel Glaina Thomas (Vincy Aloshious) and Suja S. (Darshana S. Nair). The women are flatmates who, in their spare time, shoot dance videos that they publish on Instagram under the name Insta Sisters.

Before the occurrence of the crime sends their lives into a tailspin, the film spends considerable time establishing their friendship. As a result, I found myself as a viewer invested in their fate. P.G. Prageesh has written a series of credible twists in the plotline that stay interesting till the end, but his script and the direction are not as successful in building and maintaining a sense of urgency around the investigation until the well-executed finale.

The finest thrillers are those that ace their atmospherics and/or provide insights into the social milieu in which a mystery plays out. Solamante Theneechakal’s atmosphere is overwhelmed by its music from which we are given little respite. This is a contrast to the more understated depiction of the differences in Glaina and Suja’s backgrounds. The fact that they do not practise the same religion is conveyed without a fuss, with the visual of the duo bowing their heads in prayer before images placed side by side on the same shelf, a telling illustration of cohabitation and co-existence as normal human functions.

While the run-up to the killing in the plot effectively places a spotlight on gender equations and segregation in India, the desire to come across as being with it takes the script down a path that seems inaccurate in its representation of Kerala society and even the global reality.

We inhabit a conservative country where a teacher just lost her job for posting a photo of herself in a swimsuit on Instagram. We inhabit a conservative world where the Prime Minister of Finland was lambasted for a video of a private party in which she was merely seen dancing merrily; the uproar drove her to take a drug test to ‘clear her name’. Women professionals are constantly scrutinised and censored in ways that men never are, so it defies believability that a pair of policewomen in Kerala would not be chided by their bosses, the public or the media for their uninhibited dance moves visible on a public platform – moves that include gyrating their bodies encased only in towels and opening the front of those towels while they have their backs to the camera. Tell me again which part of the Earth they belong to? 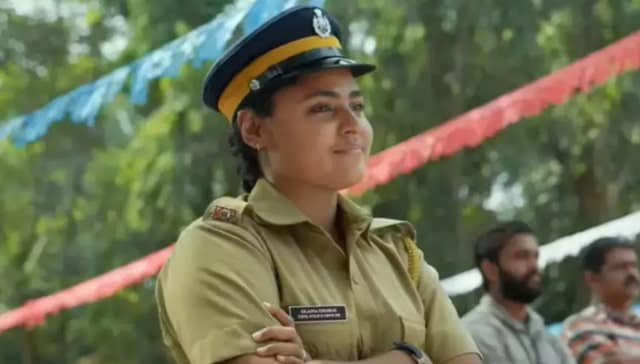 (Minor spoiler in this paragraph) Female bonding is rarely explored by Indian cinema. Even among the few portrayals we have seen, the vibe between the protagonists in Solamante Theneechakal as they look into each other’s eyes and Glaina caresses Suja’s hands, is uncommon. Whether this was unintended or designed as a red herring, it is inconsistent through this narrative. If it was intentional then, in an India that stigmatises same-gender romances, in a film industry that has done nothing to normalise such relationships, implying one – even if subtly – to confuse viewers also feels exploitative of a community that is otherwise ignored in Malayalam cinema.

It’s been a while since Lal Jose made a film that has left a lasting impression in the way he did during the first decade or so of his career. Among his recent releases, Velipadinte Pusthakam  (2017) is remembered more for the chartbusting song Entammede jimmiki kammal than its storyline. And the drab Nalpathiyonnu (41) (2019) is best recalled for teasing the public with a newsy theme – a Communist on a pilgrimage to Sabarimala – and then avoiding political comment. Solamante Theneechakal does not match up to Malayalam cinema’s excellent track record with thrillers, including Lal Jose’s own Classmates (2006) that is now a cult classic. It is, nevertheless, mildly entertaining and gives us a bunch of new actors worth watching out for.

In the past few years, Vincy Aloshious has made her presence felt in small supporting parts in Malayalam films. Here she gets a character that dominates an entire narrative and pulls off the extremes of frivolity, fear and pain, as though she has done this several times before. Lal Jose reportedly found his primary cast – Vincy, Darshana, Shambhu Menon who plays Suja’s boyfriend and Addis Antony Akkara who stars as a morally bankrupt policeman – on the TV talent hunt Nayika Nayakan. The women are the focus of Solamante Theneechakal, which is a pleasant change for a mainstream Malayalam film, and they, like the men, slip into their roles with confidence. Addis, who has an arresting screen presence, will hopefully not be typecast as a villain by unimaginative filmmakers because he is good at being a bad guy here.

Joju George enters the picture around the halfway mark and nails his role. He neither tries to, nor is allowed to, overshadow his co-stars. It takes a veteran with immense faith in his charisma to submit himself to a script in this fashion, and a director with conviction to not have the star of the cast take over once he walks in. Solamante Theneechakal is the better for it.

With its appealing cast, passably engaging whodunnit and Joju George in form as always, Solamante Theneechakal is fun while it lasts albeit unmemorable, and has enough ingredients to sustain it through its weak moments.

This review was first published in September 2022 when Solamante Theneechakal was released in theatres. The film is now streaming on ManoramaMAX. It is also available with a ManoramaMAX add-on subscription on Amazon Prime Video.