Richard, through his one-hour long set, takes audiences through a hilarious ride of all things odd that surprisingly connects most of us. From Bata rubber chappals to childhood Taekwondo classes, Naveen’s repertoire makes you laugh and marvel simultaneously.

Richard has always had an acerbic sense of humour, a fact well developed through his other notable works like Go Straight, Take Left and Pushpavalli. But what Relatively Relatable does, is view the somewhat cryptic comedian in a more vulnerable and human light.

Through the special, Naveen begins his bit with a simple, yet deceptively effective observation — of how people tend to warn their friends of imminent danger after the event has occurred, “I hate it when friends walk up to me after I’ve had a breakup and go like ‘I always knew she wasn’t the right girl for you, dude.’ I mean seriously? You could not give me this advice eight years ago?” That garners considerable laughs from the audience and Richard officially breaks the ice into the next 50 minutes of unadulterated “Oh-my-God-that’s-exactly-how-it-is” moments.

In an elaborate bit, Richard describes how much he dislikes surprise birthday bashes and how friends insist upon throwing one for him each year — “It’s just awkward. After the cake is cut, it is too much pressure on the birthday boy/girl to feed the first friend, since there is an understanding that they’ll be closest to you” — and this immediately strikes a chord with his audience members giving him the segue to test weirder waters.

Throughout the special, Richard oscillates between the real and the bizarre with seamless ease. After tapping on to the common fear of cockroaches (“whenever you see them it’s like they’ve been caught in-between a drug deal”) and lizards, Richard’s fictional thread elevates to depict a hypothetical scenario where he’d date a female cockroach — but he does all of this in the same breath, managing to never break his charm over his viewers.

Having a penchant for character performances, Richard slips in a section as Xavier Pandian, mid-way in the set. Dressed in a bright, yellow printed shirt, Pandian provides the perfect canvas for the comedian to explore his absurd brilliance. An awkward, delusional man then greets his spectators, talking to them about his sad but hilarious life choices.

Through Relatively Relatable, Naveen charts a nostalgic journey, mostly because he draws magical gems from his collection, which all 90s kids would immediately resonate with.

Whether it be his childhood swimming lessons with a heartless coach who shoved them in the deep end of the pool to “let your instincts kick in” or failed attempts at being cool by joining the Shankar Master Kung Fu Academy in Coimbatore, Naveen paints a vivid picture of clueless kids going about with life before the days of internet and social media.

Richard ends the set on a high, drawing parallels between his childhood and the kind of experiences children have nowadays. Even in that bit, the comedian’s earnestness comfortably rides him through risky statements like “I think NGOs should have facilities of hitting children.” Though it may sound highly problematic in the beginning, audiences are finally compelled to get in on his justification and erupt into guilty peals of laughter.

Much like his on-screen fictional character, Richard’s humour and thereby parts of his self, resemble a coconut — standoff-ish and rigid on the outside but sweet and mellow from within.

Relatively Relatable works for all the right reasons. More importantly, it’s Naveen Richard’s sheer love for the craft that enhances the laugh-riot. 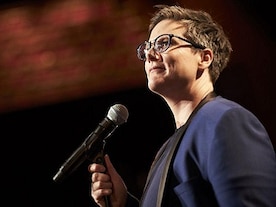