This is about a Delhi boy who loved music. He was from a family of jewellers, so he had to spend time at the shop, but it was music that made his world go round. He was studying civil engineering, so life oscillated between classroom and the shop. Whatever little time was left, the boy spent obsessing over Hindi film music and ghazals. He kept track of all the new playback singers and ghazal performers who were emerging on the horizon. He lapped up the latest albums of Pankaj Udhas, Talat Aziz, Jagjit Singh…you name it, and he had it. The dream was of course to have his own albums coming out one day. This was going to be realised sooner than he had expected.

The boy knew he had a singing voice. Feedback from his immediate peers and friends told him that he was fairly good at it. He ached to release an album of his own, but for that to happen, he needed someone to compose the music, and somebody else to write the lyrics. This was a problem. At parties, soirees and any gatherings of friends, he brought the house down with his mellifluous singing. He wished to sing his own songs, but the composer/ lyricist problem still remained. So he took the only solution left to him at that point – compose and write his own songs. He decided to take a shot at it.

Most days were spent at the shop, with long intervals of sitting idle waiting for the next customer. Other than festive occasions, jewellery stores aren’t exactly bustling with people. This allowed sufficient time to practice writing songs. It wasn’t going to be easy, so he wrote about the things he was surrounded with all day – anklets and bangles. Here’s how the first stanza went:

This was his first song. The year was 1986-87. As he began singing his own compositions, friends seemed to refuse to believe that the song was indeed made by him. Which was a good sign. It meant that he was getting really good at what he wanted to do. And there came a time when he started getting requests for his own songs rather than the latest chartbuster. He was able to navigate different genres and musical forms. Punjabi numbers, ghazals, Sufi songs, everything He felt he was ready now.

But Mumbai (Bombay then) still seemed a long way off. He needed more practice. When he watched a Hindi film and liked a song, he would often compose a song to fit the same situation in the film. The songs and compositions were piling up. Father thought son was toiling at the shop, hustling to learn the family trade. But the boy was churning out songs one after the other. He was married now, and soon a father. But he hadn’t abandoned his grand dream. He had to leave. It was now or never. He spoke to his father. Let me go just for 6 months. If nothing happens in that time, I’ll return and it’ll be only business then, no looking back. His wife was perturbed. She thought she had been married to a jeweller. What was this guy up to? He pacified her.  He wasn’t going away for long. He just wanted to give it one shot. He had so many songs in his sack now. He had to at least try to lead them to their destiny.

So it was that on August 14, 1995, Anand Raaj Anand took a train from Delhi headed for Mumbai. He was on a tier II sleeper coach on Rajdhani Express. The whole car was teeming with people who seemed to know each other. Anand realised they were all photographers. There was going to be a conference of still photographers at Wankhede Stadium, Mumbai. This entire group was going to participate in the conference. Out of 72 seats in the bogey, 70 were filled by the group. Anand was on seat 71, while the last one was occupied by a wealthy businessman. 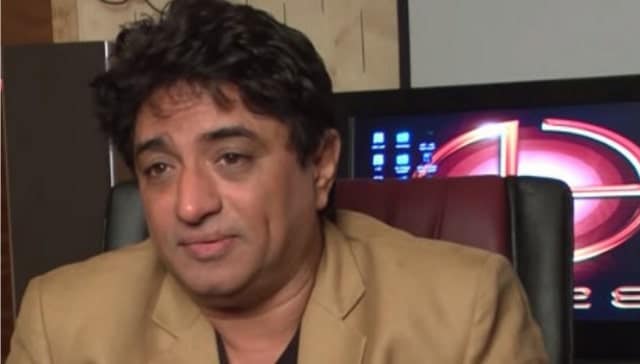 Perched on the upper berth, he heard bottles popping open. Now Anand was a full-blooded Punjabi. He knew what those sounds meant. He took a peek. A party was going on down there. Spirits were high, quite literally. As happens in such gatherings, there were some who started indulging in a bit of sher-o-shayari. The singer-poet in him couldn’t stand being away from this for too long. I’d like to answer that, he yelled from up above. Does he drink, they asked. Not really. Then stay up there, they said. Anand quickly realised what he had done, and corrected himself saying he does drink a little from time to time. What are you waiting for then? Come down! Encouraged by the friendly banter, Anand got down and joined the party.  They were having conversations in verse, a time-honoured tradition in poetry. As the alcohol kicked in, someone started humming a line. Anand sang his own tracks. Wow…which film was this from, again? This is my song, he said, not from a film. They were astonished. He sang:

Everyone lost their minds. Someone introduced himself as Sunder Deepak and said I am here to end your struggling days. As soon as we reach Mumbai, I’ll take you to meet producer-ditrector Tinnu Anand, Deepak said. Anand was over the moon. This was happening faster than he had imagined. But Deepak had one condition. Anand can’t reveal to Tinnu that they met on the train. He must go as Sunder Deepak’s cousin. “Koi nahi jee, main toh hoon hi aapka cousin!”, retorted Anand.

As they disembarked the train at Mumbai, he realised that Tinnu Anand had sent a car to pick them up. He also discovered that this Sunder Deepak was Tinnu’s family photographer. This was another shocker. He had come prepared for the proverbial struggle. He was sure the moment he reached Mumbai, he would have to start worrying about where to stay, eat etc. But there he was, being treated like royalty.

As they reached Tinnu Anand’s house, Deepak instructed him to keep the luggage in the car and come with him. They met Tinnu and a long conversation with Deepak ensued. Eventually, Deepak pointed to him and told Tinnu that this young man was his cousin, a talented singer, and has been chewing his brains to get him a chance in the movies. See if you can make something of him! Tinnu turned his attention to Anand, and said you must be crazy to have left his business and come to Mumbai. Anand said he wanted to make just one album and then he’ll head home. Sing something, Anand was told. He began:

That evening, Anand Raaj Anand sang eight songs for Tinnu Anand. Tinnu chose four of them and forbade him from giving them to anyone else. He was making a film with Amitabh Bachchan, and these songs will all be there. He would be one of the composers in his film. Anand wanted to pinch himself. This was too much for one day. He had just reached Mumbai and already making songs for an Amitabh Bachchan film.

Shriya Saran on being trolled for kissing Andrei Koscheev at Drishyam 2 screening: 'It's kind of funny'

In an interview with Network18, commenting on the same, she said, "It’s kind of funny! Andrei thinks that it’s normal to kiss me during my special moment and I think it’s beautiful."