All the posters and trailers for Nope hinted at a nightmare extra-terrestrial — and it was for sure. But an adjacent nightmare of something entirely terrestrial left an equal, if not bigger, aftershock. This nightmare appears in the opening scene of Jordan Peele’s latest feature and in an extended flashback around the half-way mark. On the set of a fictional ‘90s sitcom called “Gordy’s Home!,” one of the chimps playing Gordy snaps after a balloon pops, flies into an uncontrollable rage, and attacks the human co-stars, with the exception of young Ricky “Jupe” Park (Jacob Kim) cowering under a table. The show was subsequently cancelled. Jupe may have been the only one who made it out unharmed, but he carries the weight of the trauma even as an adult (Steven Yeun). Rather than come to terms with it in a healthy manner, he has turned it into an attraction in his Western theme park, like a shrine to a macabre episode. When describing the episode to his neighbours, the Haywoods, he suggests an SNL parody captured it to perfection. With a cold detachment, he even describes how tourists pay for the privilege of sleeping in his museum full of “Gordy’s Home!” memorabilia.

Such maladaptive responses point to a larger cultural impulse to commodify everything into merchandise, GIFs and NFTs. Peele posits this age of smartphones, social media and surveillance states has warped how we respond to trauma. Instead of processing it through therapeutic outlets, we flatten it into spectacles available for ready access on our screens. In Nope, a flying saucer-shaped alien haunts the skies above the desert outskirts of Los Angeles, devouring horses, humans or whatever lies in its path. Jupe believes he can tame the creature and make it the new star attraction of his theme park. The Haywoods, horse wrangler OJ (Daniel Kaluuya) and his sister Emerald (Keke Palmer), intend to capture it on camera. But the creature is averse to the idea of being made a spectacle of. Nope puts our inherent curiosity to look in conflict with our good judgement that tells us not to. It is the tension that lies at the core of almost every horror movie. Those who meet the creature’s gaze are sucked into its mouth, which opens like the aperture of a camera. When spectacle holds you in its thrall, it can just as easily consume you. Indeed, it is when the creature puts on a spectacle itself, morphing into its majestic, jelly fish-like true form, that it renders itself vulnerable to be gazed at and even killed. A still from Nope

When we witness anything, be it natural or unnatural, funny or tragic, our first instinct is to point and shoot. We spend our days photographing, sharing, scrolling, liking and retweeting, as if a simulacrum is the only reality and spectacle the only metric. It’s as Alex DeLarge puts it in A Clockwork Orange, “The colours of the real world only seem really real when you viddy them on the screen.” Switch on TV: war, disease, shootings, calamities are all transformed into spectacles in an endless process of production and consumption. But saturation ends up distancing us from the reality of the tragedy, and distorts our response to trauma, as Nope reveals. Jupe buries his trauma under the less disagreeable, more commodifiable moments from the “Gordy’s Home” nightmare — a shoe that miraculously stood on its head and the fist-bump he shared with the chimp — both of which are immortalised as totems in his private museum.

In The Society of the Spectacle, Guy Debord sounded a warning about a world caught in “a permanent opium war,” where what was once “directly lived has moved away into representation.” He wrote, “The externality of the spectacle in relation to the active man appears in the fact that his own gestures are no longer his but those of another who represents them to him.” Jean Baudrillard echoed his concerns in Simulacra and Simulation, describing how representations of reality could replace the things being represented if people assign meaning and value only to commodities.

If we are to face our toxic relationship with spectacle as Nope asks us to, we can’t do so without questioning our appetite for true crime, a genre built around the production and consumption of tragedy. Each documentary or dramatization of a person or a family’s worst day sparks the inevitable exploitation vs entertainment discourse. Some are more self-aware than others. The Staircase, much like Nope, functions as a spectacle while being a critique of it. The HBO Max dramatization of the 2004 docuseries of the same name re-creates the many theories surrounding the death of Kathleen Peterson: Did she slip? Was she killed by her husband Michael? Was an owl responsible? Two decades after the tragedy, Toni Collette fell down the stairs in many horrifying ways for us to dissect and debate on social media. Excavating a victim or a survivor’s trauma for entertainment can end up reopening old wounds — when all they want to do is move on. 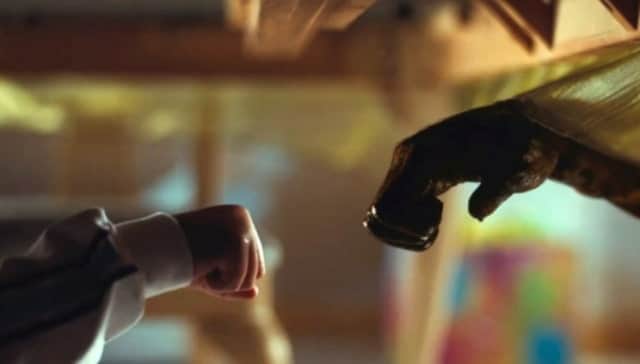 A still from Nope

Trauma has become a go-to shorthand for character backstories in this content economy. As Parul Sehgal pointed out in an essay for The New Yorker, it is too often used to wash out all other traits and remould personality in its own image. Not all stories about trauma are exploitative or reductive. Some can be cathartic even, helping people who have used denial or downplayed their own trauma as coping mechanisms. Some without a well-interrogated point of view risk reducing trauma to a spectacle and end up stirring up more trauma for the survivors, as was the case with the recent docuseries House of Hammer. Directors Elli Hakami and Julian P Hobbs insisted the purpose of their three-part investigation — into the sexual misconduct allegations against actor Armie Hammer and his family’s dark history of misdeeds — was to “break the cycles of abuse.” But the woman, whose allegations launched the LAPD investigation but refused to be interviewed for the series, spoke out against Hakami and Hobbs. “The way they’ve been exploiting my trauma is disgusting,” she said in a statement to the LA Times. “When I keep screaming ‘no’ and they keep going, saying they don’t need my permission, they remind me of Armie.” Feeding on a survivor’s trauma for spectacle can end up feeding into their trauma. A life lived as an accumulation of spectacles and simulacra, as Nope, Debord and Baudrillard teach us, can alienate us from reality and cost us our humanity.

Prahlad Srihari is a film and music writer based in Bengaluru.