"My entire moral code, as a kid and now, is a need to be thought of as good. It was all I wrote about, it was all I wanted. It was the complete and total belief system that I subscribed to as a kid," says Taylor Swift in Miss Americana, a Lana Wilson-directed Netflix documentary, which had its premiere at the Sundance Film Festival.

Wilson is known for her Emmy Award-winning 2013 documentary on abortion, After Tiller, and The Departure in 2017 about suicides in Japan.

Through reality TV-style direct-to-camera interviews, interspersed with cellphone and home videos alongside media footage of the iconic American musician, the movie attempts to show a new side to Swift or atleast that is what the audience have been led to believe. Netflix had said Swift would be seen here "as a a woman harnessing the full power of her voice," but despite unlimited access to her intimate life, Miss Americana seems incomplete. 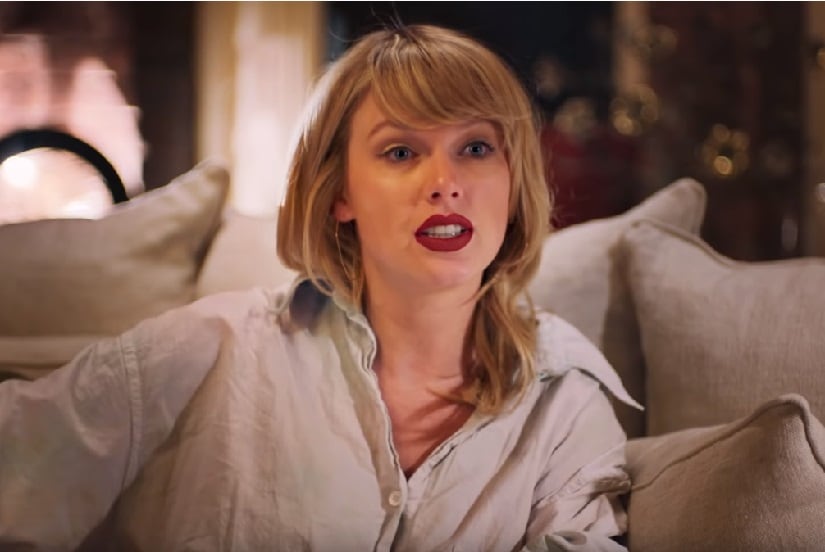 Taylor Swift in a still from Miss Americana. YouTube

Swift plays the piano as her kitten walks all over the keys, shows her delight at reading teenage journal entries, and she reveals her cheesy preference to use a quill and ink over a pen to write Miss Americana. The aim is to show Swift as one of the audience, an ordinary girl with the same vulnerabilities, hopes, and dreams, who also does not take herself too seriously.

Wilson maps Swift's rise to stardom at age 16, her struggle to be America's sweetheart, and how she gradually outgrew these impossible expectations. The focal point is to showcase who finally emerged from this tumultuous journey — someone seemingly unafraid to express her political opinions after years of silence. This self-censorship, Swift justifies, was only because she was taught not to enforce her politics on other people, an excuse liberally used by our own homegrown celebrities. The widespread backlash faced by Dixie Chicks following their criticism of former US President George W Bush also convinced her to keep mum.

Watching an artist in the process of creation is a hard-to-come-by opportunity. Here, Wilson documents Swift putting together her 2019 studio album Lover with producers Joel Little and Jack Antonoff. She is completely at ease as she talks about never having tasted a burrito until two years ago or how she has not figured out what the next step in her life is. Little comforts her that nobody is ever prepared and they just figures their way out. To this, she replies, "I kind of don’t have the luxury of figuring stuff out because my life is planned two years ahead of time."

Miss Americana only becomes slightly engaging when it pivots to Swift's political awakening. Having refused to endorse both Hilary Clinton and Donald Trump during the 2016 US presidential elections, Swift now declares she wants to be "on the right side of history." In a heated discussion with her father and two other members of her team, where they try to dissuade her from being vocal, Swift stands firm in her decision.

As she pushes out her first statement supporting Tennessee Democrat Phil Bredesen for Senate, Swift shares a victory drink with her publicist and mother Andrea. "I feel really good about not feeling muzzled anymore. And it was my own doing," Swift then says. She is openly dismissive of her home state Tennessee's Democrat candidate Marsha Blackburn's regressive policies, calling her "Trump in a wig." Even though Blackburn won the race, Swift's involvement did spark a rise in young voter registration. The sooner public figures realise their voices matter, the easier it will be to push for the greater good.

Swift recalls the nasty 2009 MTV Video Music Awards incident — "pretty formative experience for me" — where Kanye West interrupted her acceptance speech only to proclaim Beyonce had the best music video. Swift clearly had a strong say over the messaging of this documentary, which paints her exactly like the "good" person she had always set out to be, evading other scandals, and her proclivity of using romantic failures as inspirations for songs ('Dear John' and 'We Are Never Getting Back Together').

Another controversy with West over the lyrics, "I feel like me and Taylor might still have sex / Why? I made that bitch famous," from 'Famous,' a track from The Life of Pablo, is also brought up. Swift was accused of being a liar for feigning ignorance about agreeing to be called a b***h after Kim Kardashian posted a recording of West asking for Swift's approval. Miss Americana, instead of presenting Swift's side of the story, only goes over how the backlash affected her.

Moreover, the documentary makes no mentions of her famous female friendships, her family, and refrains from delving deeper into her relationship with Joe Alwyn. In a sequence, the musician mentions her disordered eating once but the topic is never brought up again. The sanitised portrayal of the singer makes the movie a bit of a drag and more of a carefully crafted PR move.

Undoubtedly, every bit and piece of Miss Americana will be savoured by her loyal fan base. It may even spark a newfound curiosity in her music for others.