Joker composer Hildur Guðnadóttir made history by becoming the first woman in 19 years to win best original score at the Golden Globes, where Elton John and Bernie Taupin finally won a major award together after collaborating for 52 years.

She was the sole female nominee, besting Randy Newman (Marriage Story), Alexandre Desplat (Little Women), Thomas Newman (1917) and Daniel Pemberton (Motherless Brooklyn) to win the prize. The last woman to win the Globe for best original score was Lisa Gerrard in 2001 for Gladiator, which she shared with Hans Zimmer. Guðnadóttir is a classically trained cellist from Iceland who won an Emmy in September for scoring Chernobyl and is also up for a Grammy for her work on the HBO series. She thanked Joker director Todd Phillips, best actor winner Joaquin Phoenix and executive music producer Jason Ruder.

Early in the night, John and Taupin won best original song for writing '(I’m Gonna) Love Me Again' from his Rocketman biopic.

“(It’s) the first time I’ve ever won an award with him, ever,” John said onstage looking to Taupin. “We never won a Grammy. We never did anything together except for this, and I’m so happy.”

John won an Academy Award and Golden Globe with Tim Rice for 'Can You Feel the Love Tonight' from the original The Lion King. John has also won five Grammy Awards. Taupin won his first Golden Globe with Gustavo Santaolalla for 'A Love That Will Never Grow Old' from Brokeback Mountain.

Together, the duo have crafted John songs like 'Bennie and the Jets,' 'Goodbye Yellow Brick Road,' 'Rocket Man,' 'Tiny Dancer,' 'Candle in the Wind' and 'Saturday Night’s Alright for Fighting.'

'(I’m Gonna) Love Me Again' and Joker were shortlisted for best original song and best original score, respectively, at the 2020 Academy Awards, which will take place 9 February.

“Thank you to all my fellow nominees, they’re all great songwriters,” John said.

He called making Rocketman one of the “most emotional moments in my life.”

At the Globes, Taron Egerton won best performance by an actor in a motion picture — musical or comedy for portraying John. 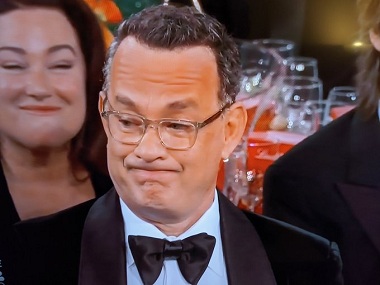