Explained: Who is Kunal Kamra, the controversial stand-up comic?

Kamra’s journey on the stage began in 2013 and today, he has a fierce take on everything, from films to politics. He has had his share of controversies.

Stand-up comedian Kunal Kamra has been making news and headlines for long. His take on news, sports, politics, films, and everything in between, always blows up on social media. But who is Kunal Kamra? How did it all begin?

The Stand-Up and Comedy

Kamra began performing on stage back in 2013 at the Canvas Laugh Club in Mumbai. As experiences happened, both good and bad, he began taking digs and jibes at the events that happen in India. He had his humorous take on the demonetization as well. In July 2017, he started his own show called Shut Up Ya Kunal with Ramit Verma. It was a satirical take on news debates that also saw invited guests, followed by mostly amusing conversations. One of the guests on the show was Arvind Kejriwal.

Kamra has been in trouble one too many times for his take on the events transpiring in the country. In 2017, he received death threats for making comments on hyper-nationalism and even his take on demonetization and the government’s attitude towards the Indian army. A year later, he was asked to vacate his premise due to his political opinions. He wrote a long post on Facebook and one part of it read- “One day your land lady will ask you to vacate her house and look for another place because of your political opinion. And while all this going on and you’re particularly suicidal, HDFC will message you asking you if you’ve linked your Aadhar Card. So CHOOSE wisely about the comedian you want to become.
Also I’m looking for a 1 BHK in Shivaji Park. Lemme know if anyone knows of anything available!”

In 2020, Kamra and Arnab Goswami were on the same flight (Indigo) when the comedian tried to have a debate with him to no avail. The consequence of the act was such that the comedian was banned by the airlines. This was followed by Kamra facing ban by airlines such as Air India and GoAir.

He was in news again after his series of tweets against the Supreme Court when Arnab Goswami was granted interim bail. Here are some of the tweets Kamra made: 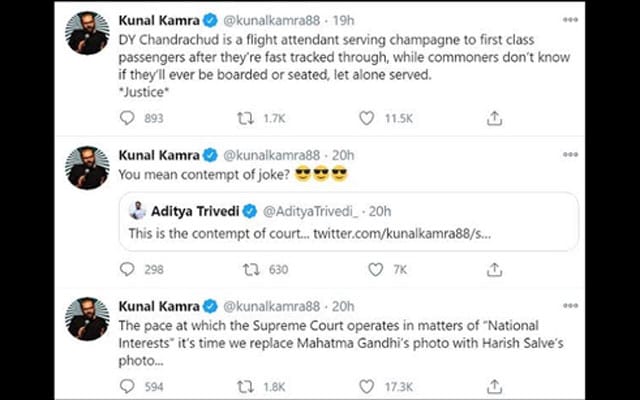 The latest controversy he has embroiled himself in is his alleged disrespect to Hinduism. The Vishwa Hindu Parishad canceled his shows in Gurugram after which the comedian wrote an open letter to them. The comedian, who has criticised the BJP-led NDA government over a number of issues in the past, proclaimed himself as “a bigger Hindu” than the VHP as he doesn’t earn his living by fear mongering and issuing threats. This is how he replied to the party:

Kamra, 33, also said he doesn’t blame the club owner who had to cancel his shows. You got my Gurgaon show cancelled by threatening the club’s owner. Why should I blame him? After all, he has a business to run. How will he deal with goons? He can’t go to the police. Even if he goes to the police, the police themselves will come to you with a request. Now, the whole system belongs to you,” he said.