Television’s biggest stars on Monday hit the red carpet — well, the gold carpet — for the Emmys, for the first full-fledged gala honoring the best of the small screen since the start of the coronavirus pandemic.

After a virtual ceremony in 2020 and a scaled-back show last year, gowns and tuxedos were de rigueur at the Microsoft Theater in downtown Los Angeles, where the glitterati arrived in bright sunshine.

For the first major Tinseltown awards show since the Oscars earlier this year, some of Hollywood’s A-list fashionistas opted for classic pretty in pink vibes.

Fashion house darling Elle Fanning, who was nominated for her work as Catherine the Great on “The Great,” wowed onlookers in a black strapless Sharon Long gown with a pink ruffled neckline and dramatic sweeping train with a pink lining. And Connie Britton, one of the many acting nominees for HBO’s breakout dark comedy “The White Lotus,” rocked a floaty salmon-colored Monique Lhuillier gown with matching cape.

Glittering metallic fabrics are always a winner when one is hoping to end the night with a golden Emmys statuette.

And Quinta Brunson did just that. The “Abbott Elementary” star and creator, who won an Emmy for writing the pilot of her breakout ABC sitcom, stunned the red carpet in a strapless brown Dolce & Gabbana gown with a bronze skirt and a daring thigh-high slit.

Britain’s Lily James, who was nominated for the role of bombshell actress Pamela Anderson in the limited series “Pam and Tommy,” wore a skin-tight bronze Versace gown with ruching at the waist.

And Sandra Oh, nominated for the final season of “Killing Eve,” slayed in a sequined sparkling purple suit with a matching blouse open to the navel. 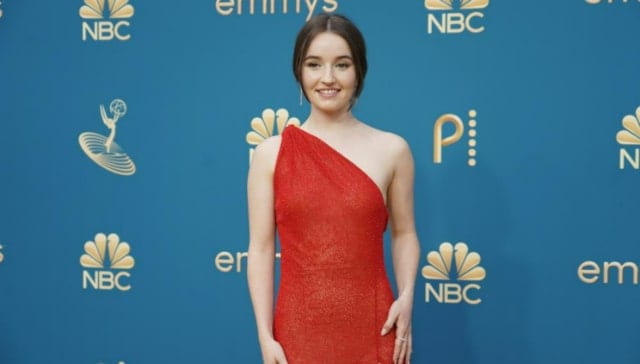 “I want to channel my inner rock star, and I love Prince, and I love the color purple,” she told Variety on the red carpet.

Not to be left out, “Euphoria” star Colman Domingo — who won an Emmy for best guest actor in a drama — was on trend in a patterned D&G gold suit with a black see-through shirt. Zendaya, who repeated as best actress in a drama for raw teen series “Euphoria,” went for basic black — a strapless Valentino gown with a sweeping full skirt and pockets. Accessories? Diamonds, a black headband and a trophy. Hitmaker Lizzo, whose series “Lizzo’s Watch Out For The Big Grrrls” won in the competition program category, made a serious fashion statement in a billowing red tulle dress.